Bastion was originally released for Xbox 360 as part of Microsoft’s Summer of Arcade promotion. This annual event typically features some of the best downloadable games the system will release all year long, and Bastion is no exception to this rule. The game was so well received that a PC port of the game was released only a short time after its initial release. The PC version of the game is nearly identical to its Xbox 360 counterpart with the exception of a funny little easter egg to discover from the game series Portal.

Bastion weaves a strange tale about a post apocalyptic world and the few survivors of the event that nearly destroyed civilization as a whole. A device appropriately named the Bastion erupts one fateful day and brings about the event called The Calamity. The Calamity leaves the world in shambles and takes nearly every human with it, although many beasts seem to have survived the event as you’ll fight hordes of them continuously throughout the course of the game. Bastion doesn’t begin with this revelation however, as you’ll begin as a young man with white hair waking in the middle of some strange world. Your only guide for now is a friendly and omnipotent narrative voice that tells you what is going on. Eventually you’ll learn of The Calamity, who all survived it and how to restore the Bastion to full power and hopefully make things better. 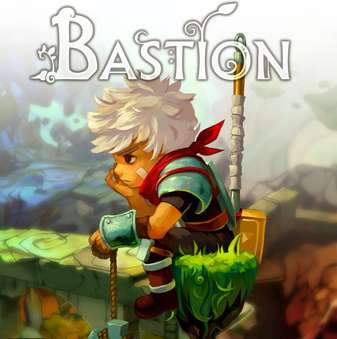 You’ll play the entire game as a nameless character which the narrator refers to as The Kid. The Kid will have to find and recover crystals scattered throughout the crumbling world, but there will be many obstacles in his way. Bastion is an Action RPG, so you’ll do your typical hacking, slashing, dodging and blocking to take out enemies. You find plenty of weapons while playing through the game, and typically they will be short range weapons like a hammer or long range like a gun, but some weapons are more versatile than others. You’ll also find a few survivors throughout your journey; some of them are more friendly than others. Once you restore some power to the Bastion, you can build structures within the large device to help you on your journey including a forge, armory and distillery – because drinking makes you stronger.

There are a variety of ways to play the game, although most aren’t unlocked until after you’ve completed the game once. The game doesn’t feature a difficulty setting, but you can play through the game in either Casual Mode or Hardcore Mode which allow for different degrees of difficulty for their respective modes. Upon completing the game, you will unlock New Game + which allows you to replay the game with all of your equipment and upgrades still intact. There is also a Score Attack Mode which times your playthrough of the entire game and posts the results to online leaderboards, so you can see how you stack up against the rest of the world. Also during your travels, you’ll come across strange artifacts that will allow you to visit past memories. You’ll receive a lot of back story on the characters of the game if you are able to complete the challenges. The results of the challenges will also be posted to online leaderboards. And just in case you are finding the game too easy, you can visit shrines and activate idols that piss off the gods associated with the idols who will then make the game more difficult in return.

There really isn’t too much not to like about Bastion. Even if you’re not a fan of the storyline, you have to acknowledge the unique way it is unveiled to you throughout the game. The graphics aren’t super great, but they are a pretty blend of artistic design like you’ll see in few games nowadays. The stages are awesome to look at with the many different colors making up the world and watching how attacks are executed, but many of the character models could use some touching up. The camera stays pretty stationary throughout the game and will rarely become a hindrance. To top off the great presentation of the game is a nice soundtrack. The music fits so perfectly with the actions in the game and the narrator; you may find yourself coming back to play through the game again just to hear the great tunes.

Bastion is one of those rare games that you just can’t miss. The trial version of the game really doesn’t do it justice. The game’s storyline and items are revealed somewhat slowly forcing you to purchase the whole game if you want to see what the game is really all about. However, the $15 price tag is a small price to pay for such an amazing gaming experience. Bastion is easily one of the best games of the year, and it should be owned by any gamer.