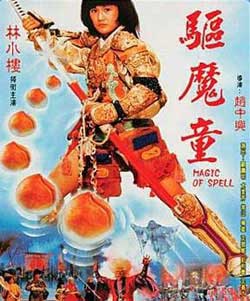 Peach Boy and his mother live in a village. One day, there is a young man suddenly comes to the village and asks Peach Boy as his teacher because of the worship. At the same time, the elder of the devil palace wants to set Peach Boy to the deathtrap. They grasp children in order to have better martial arts skills. Peach Boy becomes righteous and indignant, he decides to exorcise demons, but unexpectedly, his mother is killed by the devil. The battle between Peach Boy and the devil is unavoidable…

The wild, weird and wacky, If you have never had the pleasure of seeing the film “Magic of Spell”, you may need to mark this one on your to-do list. I was first recommended to the title per the Asian cult magazine and have been in search of it ever since. Since this is an older more obscure title it’s not something that’s easily acquired but it is worth the wait in regards to wacky Asian cinema. With choppy edit cuts, hyper color, simple camera tricks, string flying acrobatics and sped up martial arts moves this film really is a silly combination of old school meets kabuki horror meets Sid and Marty Krofft .I wouldn’t call it a great film, but it is original, silly and even manages to throw in some horror here and there.

Peach boy who really looks more like a woman lives in a small village with his mom. A trainee shows up that is seeking his guidance as a master to train in the arts. Peach boy sort of the neighborhood good fella, possesses superior strength, flying abilities and some slick martial arts moves. Meanwhile back in the evil castle an elder requests that his servants seek out a human ginseng in addition to small children to bring his powers back and renew his life force. While this decrepit old wizard with makeup that looks more like oatmeal sits in a pool of blood….. his servants of evil all head out to collect the ingredients needed to restore his youth.

These servants are a ghost, a goblin, a man called Stone and a wizard son of the elder. They each sort of bring a special skill to the table. Stone, who sports a stupid looking strongman mustache carries around a boulder on his hand to take out his opponents with his weapon of rock. Goblin likes to shoot some kind of explosive gun and ghost seems to be able to fly, hang from trees and well…. push out some mean martial arts skills. The wizard has all kinds of throwing contraptions along with a few spells that seem to get him by.

Before heading out, the Peach boy, trainee and mother are assaulted by a pissed off zombie who attacks the trainee when he’s performing a puppet show. The legion of doom as I like to call them show up with their army and end up murdering the mother of peach boy. This leads to a counterattack and journey to the evil castle of the devil.

If this all sounds wacky, then its only wacky because that’s exactly what this film throws at you. A bit of nonsense, a broken plot, odd heroes, silly wizards and some battles that throw out a few tricks on there own. While watching I was instantly taken into a colorful fantasy world where viewers will be thankful that our technology has progressed to better visuals Folks fly around like they are made of air and do battle in the oddest ways. My favorite though is when Stone actually becomes a stone with munch mouth attacks that are as silly as any 80s Saturday morning short back in the day.

This highflying fantasy comes from Taiwan and by all standards is a interesting piece of work that seems to base some of its story on ancient folklore. The vegetable characters are just plain goofy to watch with special effects that are as dated as they come. Some where along the line, directors Yung-chien Chiang and Tso Nam Lee decided that using the cut and film camera trick was so awesome that they had to use it in just about every shot. On the most part you can watch alot of this with your kids ….though that overly feminine speaking peach boy just really creeps me out! I think I read somewhere the term acid trip….well I don’t think you’ll need any boosters with this one.