Saints Row: The Third is the most over the top, perverted and action-packed game I’ve ever played. The game constantly throws pop culture references at you, and each mission seems to be more ridiculous than the last, even when you think it couldn’t possibly get any crazier. If you’re unfamiliar with the Saints Row series, you should know that it’s a sandbox, action shooter series much like the Grand Theft Auto series. The main difference in the two is the tone of the games; Grand Theft Auto takes itself pretty seriously and tries to be realistic, and Saints Row tends to play on the lighter side of things and does its best to show you a good time. In Saints Row: The Third, you’ll have mid-air shootouts while skydiving inside of a tank one minute and clearing zombies off of an infested island for Mayor Burt Reynolds the next. Still, it’s not all goofy antics as the game has some more serious adult tones also, such as the mourning of a fallen member of your group near the beginning of the game.

The story of Saints Row: The Third begins with the arrival of the notorious gang known as the Third Street Saints arriving in a new city called Steelport. The Saints have gained plenty of notoriety in the previous two games for their antics around the town of Stillwater, and they are now looking to expand into Steelport. Doing so will require The Saints to take down Steelport’s already established game and effectively deal with the heat that their arrival will cause with local authority. Campaign should take around 8-10 hours to complete, and it is fully cooperative to play online.

The game’s story may begin sort of slow, but it soon picks up and it never ceases being insanely fun until the ending credits roll. The game will throw decisions at you periodically throughout the course of the game, and these decisions will usually net you some pretty cool weapons or sometimes even change the course of the storyline. You will earn respect and money for completing each mission. Money you earn can be used to purchase upgrades for your cribs, weapons, homies, or even yourself. Some of the missions near the start of the game can get boring as they require you to complete simple missions that are really just tutorials for some of the many side missions in the game, and most of the side missions are sort of lame when compared with the rest of the game. 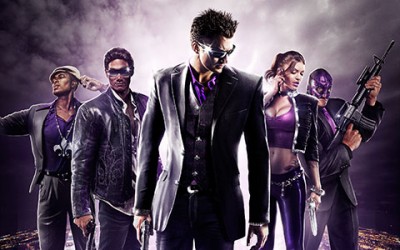 If you get bored with playing all that campaign has to offer, Saints Row: The Third also has a horde mode cleverly named Whored Mode. Whored Mode places players in one of three maps. The object on each map is to kill 30 waves of enemies. Each wave is different; one round you may be fighting off hordes of zombies with guns, and you may be fighting off prostitutes with dildo baseball bats the next round. Whored Mode is pretty fun that offers something different than what campaign offers, but killing enemies in a central area does start to feel repetitive after a little while, so you probably won’t spend too much time playing this mode.

Saints Row: The Third is a crazy rollercoaster ride that never really lets up from start to finish. There are science fiction and horror scenarios mixed in with the awesome action sequences to ensure that the game is never repetitive. Except for a few boring side missions, some minor glitches and a lackluster multiplayer mode, the game is pretty much perfect. If you’re looking for a fun new game, look no further than Saints Row: The Third.