Home | ‘Room and Board’ for Kane Hodder’s Autobiography 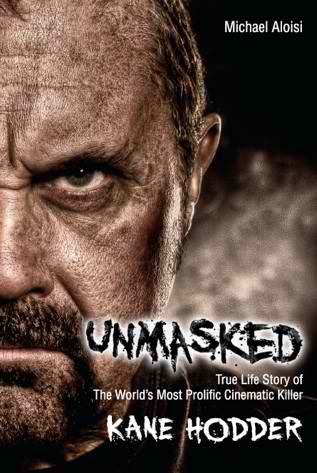 The haunting Halloween month of October started with the release of a much-anticipated autobiography of Kane Hodder, “Unmasked – The True Life Story Of The World’s Most Prolific Cinematic Killer”, (“Texas Chainsaw Massacre 3”, “Friday the 13th: Part VII”, “Jason Goes To Hell – The Final Friday”).

Prolific movie killer, Kane previously won the Best Actor award for Austin’s Fantastic Fest for “Hatchet”. Kane Hodder will continue his horror legacy by starring in a bloody, sexy and sultry horror flick “Room and Board”, written and directed by Julia Davis. Kane’s Louisiana roots link him to Producer BJ Davis and Fleur De Lis Film Studios, dating back to their days of filming in New Orleans since the early 1980’s.

Louisiana native, filmmaker BJ Davis is the Producer of “Room and Board”, penned by Julia Davis (“Medal of Honor”, “Forget About It”, “The Terror Within”) with co-writer Rob Neighbors (“LAPD – To Protect and To Serve”).

Alexandria, Louisiana Film Commissioner Bill Hess and Mayor Jacques Roy have opened the city gates to the production of “Room and Board” for Fleur De Lis Film Studios. They are also hosting the spooky cable TV series, “Ghost Hunters”, set to film in the Alexandria area, one of America’s most haunted places known for ghostly encounters, on October 31, 2011. “The Alexandria area is greatly expanding its production services with available crew and equipment,” said Producer BJ Davis.

Fleur De Lis Film Studios VP and Director of Photography Asif Akbar (“Axis”, “The Terror Within”) is another Louisiana native, excited to be lensing the picture that was greenlit by former Casper (“The Ghost”) Company’s Executive Producer Roger Burlage (“Return Of The Living Dead”, “Suicide Kings”).

Academy Award nominee Robert Forster (“Jackie Brown”, “Ghosts Of Girlfriends Past”) is in talks and Oscar nominee, Robert Loggia (“Scarface”, “Forget About It”) is set to head the zany cast. Forster would be re-joining former cast member Tiny “Zeus” Lister (“Monster Ark”, “The Dark Knight”) to bring this unique dark world of horrors to life on the big screen.

Producer of Academy Award winning films John D. Schofield (“As Good As It Gets”, “Ali”, “Jerry McGuire”) continues to work with BJ and Julia Davis and Fleur De Lis Film Studios team of producers, including Manuel Flores (“Forget About It”) and Lindsay Hudson (“The Terror Within”, “Rogues In Robes”).

Scream Queen Brooke Lewis (“Slime City Massacre”, “Vamp It Out”), Brandon Slagle (“Area 51 Confidential”, “The Masks That Monsters Wear”), William Katt (“Carrie”) and other known stars of the horror genre will round out the cast of this luscious, tongue-in-cheek horror flick, already positioned to become a cult classic. Fans are bracing themselves for a trip to the bloody “Room and Board”, where patrons are dying to get in and end up on the menu. “Room and Board” features a colorful family on and off the screen, as most of the cast and crew have previously worked together on some of the most celebrated horror films in history. “This is a project full of passion, horror and drama, with elements of dark comedy. Nothing is a taboo in this irreverent film, based on a true story. The film’s logline says it all,” muses director Julia Davis, “Eat your heart out!”

Tags Kane Hodder Room and Board