The FX Shop: Interview – Bart Butler (aka Spoils the Clown)

Good evening maggot infested corpse munchers and puss drinking fiends..today i bringyou a real boogieman of horror/fx man and his name is Bart Butler also known as SPOILS The CLOWN! Hes been in the fx business for years and now operates his own hauntedattraction and he can be currently seen in the upcoming film SPOILS. 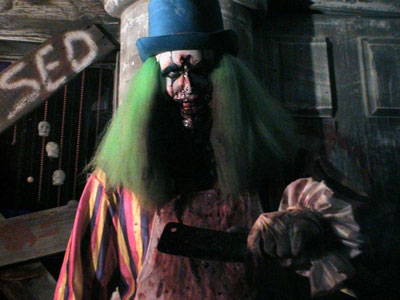 Dr. Gorehound: When did you first enter make-up/props/prosthetics carrer, and what do you find most fascinating about it?

Bart Butler: Professionally I started in 1993 at Haunted Verdun Manor. For 2 months me and some guys lived in the fx workshop trailer of the haunt. We were always making anything we could think of. Some great things came out of those 2 months! The most fascinating thing I like most about doing fx is creating anything I want that will scare the piss out of someone! 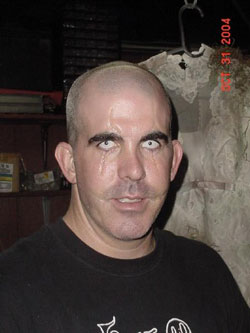 Dr. Gorehound: What haunted house attraction do you own now and operate? 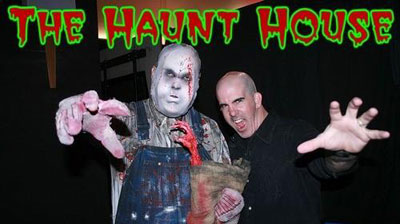 Dr. Gorehound: What films have you done make-up fx/props on, and what materials do you use to make them look realistic?

Bart Butler: I have done make-up for several Haunted Verdun Manor commercials, and Spoils! As far as materials go…… latex, panty hose, Hog’s blood, Gel 10, and anything that you can find in the tool room! 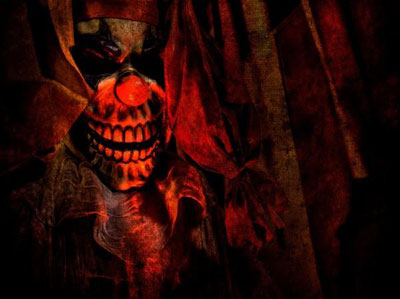 Bart Butler: A gift! Lance back in the early 90’s had the best props, masks, and scenic design that were close to Disney’s Haunted Mansion or the movies. I still to this day use alot of his techniques! Working with Lance was always a blast!

Dr. Gorehound: What films have you done really gorie and extreme fx on? What are the types of deaths?

Bart Butler: Spoils. Axe to the back, Sledge to the head, sawing of the leg, chainsaw in the gut! Now in the haunt and also in the movie we had props like the face that has been ripped off and the half torso.

Dr. Gorehound: Do you also do zombie make-up and flesh tearing fx?

Bart Butler: Yes, cotton and latex is the cheapest way! Tearing of flesh is one of the easiest fx things to do. Just slap on the latex and pull some spots out. DING! DONE! With Zombie make-up you almost can never go wrong. Layers…..always remember layers!

Dr. Gorehound: When did you first come up with the scary haunt character SPOILS The Clown, and what part of the process do you enjoy the most playing that character?

Bart Butler: When Verdun Manor came up with it’s second attraction. It was a carnival themed haunt. Lots of clowns. That is when I noticed how many people were afraid of clowns. So I came up with Spoils. He did not look like he does now. It was very simple. It took several years of playing with different things to get what we have now.

Dr. Gorehound: You also do set design and masks, what kinds of fx did you use to make those things?

Bart Butler: So far it has been traditional in making masks. Sculpting, Mold, Latex, and Paint. Last few years have really gotten into airbrushing anything and everything. This year we are really going into silicone. Have messed with it a couple of times. Loved it…..just a little expensive.

Doing set design in my business is make everything look very old and
worn. Most of the stuff that I buy is brand new. It is a slow process of aging walls and props. Again, layers! Always layers! You can take wallpaper for an example. There are many ways you can age it, but I will give you the simple one. Black and brown spray paint. Now you have to hold it pretty far away from the wall to get a good mist coat on it. It works but you get most of the paint on you and the ground. Stain works for the water damage look. Dripping down from the ceiling. That easy! Done! 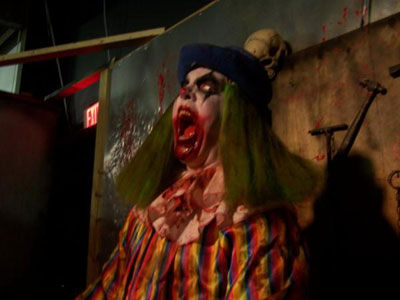 Dr. Gorehound: How was it like working on the Haunted Verdun Manor commercials?

Bart Butler: Sucked!!!! I was 19 and was very excited about working on my first commercial. The excitement was over after the 23rd take of me popping out of a coffin. But seeing myself after all said and done was worth it.

Dr. Gorehound: What were the shows you stared in on Russ Martin’s Hot TV?

Bart Butler: Hot TV came out to Verdun twice during there run. I was several characters on the show. The one I remember the most was when Russ was laying on the Saw table and I kept acting like I was going to ram the chainsaw into his nuts. It was on the final cut surprisingly.

Dr. Gorehound: Do you scare alot of people as Spoils the Clown in your Haunt House attraction, and have you made any male or females soil themselves? lol

Bart Butler: YES!!! So many people are frightened of clowns. I have made many females and males go into the fetal position and have had women soil themselves. It is so satisfying!

Dr. Gorehound: What is the status on the SPOILS film? and What is it about?

Bart Butler: We are still in post production. I think the only thing we have left is getting the sound edited. Abel and Jennifer are looking at the release to be in January. Spoils is a revengesploitation film with a lot of twists that will keep you guessing!

Dr. Gorehound: What types of fx did you do in the film Spoils?

Bart Butler: Zombies(we made them cheesy for the b-movie film that they are watching in the movie), chain-saw gashes, cutting legs open, eye gouge, axe in the back, sledge to the head, hook in the ass, tongue being ripped out, head smashing, make-up for everyone, scaring, well damn everything you are going to see in the movie, all the way down to each single drop of blood.

Dr. Gorehound: What do you find the hardest in this tough current economy about creating make-up and props? Has it affected your work or not?

Bart Butler: You can make make-up and props on a dime if you wanted to. If you and the director are on the same path and shoot the scenes in more created ways you can make make-up or props look like they are something that took you days to make when it only took you an hour or two. The economy has not affected the way my haunt or the movie has done! 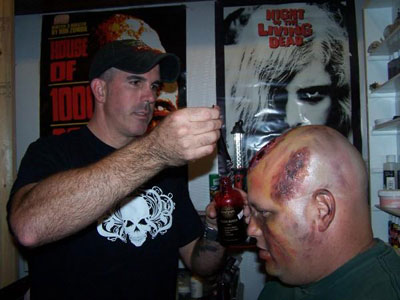 Dr. Gorehound: Do act or direct any horror films?

Bart Butler: Spoils is the only horror film that I have been in. I play two parts in the movie. Of course Spoils and the other is Ivan. Spoils is easy to play because he comes alive as soon as the costume is on. Ivan on the other hand sucked. I am a Texan and playing a someone who speaking with foreign tongue does not work well.

Dr. Gorehound: What fx legends do you admire that build the bridge for you to do what you love?

Dr. Gorehound: What is your favorite horror movie and why?

Bart Butler: I would have to say it is a tie between Texas Chainsaw Massacre and The Thing! TCM brought the physical and mental torture to the table literally in the dining room scene. “Hit her Grandpa!” The Thing brought about the best special fx I have seen before CGI!

Dr. Gorehound: What are some horror directors you respect and admire?

Dr. Gorehound: Do you have an official website/myspace were fx clients can contact you at?

so much for the time Mr. Spoils!
It Has been fun……I love to sling gore with people!

Okay the Doc is out to kill someone again! Woo…