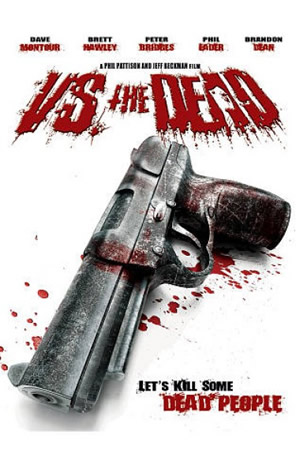 A secret deadly military chemical weapon known as Round 2 mistakenly gets sent to a tattoo shop in a small Canadian town. The shop owner uses is as tattoo ink and soon his patrons are infected becoming zombies. One of the infected is a pizza shop owner who returns to his restaurant just in time to turn into the living dead. Now only a small group of friends stand between civilizations and total world-wide annihilation.

Jeff Beckman and Phill Pattison’s low budget Canadian zombie flick, Vs, the Dead, takes it time getting the story into high gear making for a painfully slow start to an otherwise energetic and gooey as hell horror film. The directors somehow make the most out of their paper thin characters turning them into watchable zombie slayers. Once the flesh-munching is underway, the film is full-tilt nonsense and gore effects. The cast of unknowns bring an indescribable charm to their roles, broadly defining their characters and sticking to them throughout – sometimes even after they become the living dead. The zombie makeup is standard pasty, blood-splattered variety but the gore effects are gruesome and plentiful. Fun dialog elevates the action and comedy to a palatable level creating a forgettable but enjoyable entry into the zombie movie catalog. 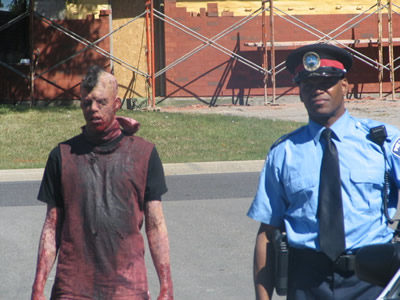 This film rides on the shoulders of its characters, such as Woody (Phil Fader) and Marcus (Brandon Dean) once the second half begins to focus on their dynami\cs and interactions. When one of the group of loiterers, Dee (Brett Hawley), becomes infected they quickly learn the living dead only attach those they hate and leave their “friends” alone – an interesting twist to zombie mythology. A good amount of the middle is about their protecting their zombie buddy and trying to find a way to save him or avenge him. At this point, one of the supporting characters, Druff (Dave Montour) steps up to become the lead and does a damn fine job of it. While not the best actor of the cast, he is the most charismatic and has the best lines: “I ain’t no customer, you ever see me pay for anything;” “maybe another beer though, this one is going down faster than your sister;” and “spreads faster than your girlfriend’s legs.” He also ends up being a lot smarter than originally thought and more effective than his surround cast. The script smartly allows him to figure out what is going on and resolve conflicts within the group of survivors in a manner that is beyond his initial character description. The result improves and supports the movie. 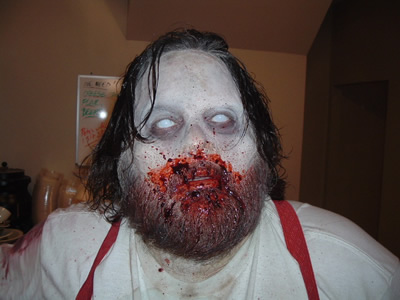 Any zombie film is only as good as the make-up and effects and Vs. the Dead serves up a fine batch of grotesque zombies and gore. The zombies themselves are the garden variety – pasty white make up with blood and grue to make them icky. Combined with excellent eye contacts, the zombies appear and act like zombies – and that’s all the matters. When the time comes to bash, slice and shoot the zombies (and other victims), the effects kick in and never disappoint. There is a ton of blood, brain matter, severed limbs and a bashed heads to make any horror film a blast to watch. These are low-budget, garage effects and they are great. Despite any issues with pacing, acting, dialog or plot, the gore in Vs. the Dead makes the entire film watchable. This is the kind of zombie film that was prevalent in the early age of direct to video low budget gore-fests and sits up along side them proudly. In a scene where our hero returns to the tattoo parlor only to encounter and battle a dozen zombies (and the shop owner), the story throws blood red madness at the screen with Evil Dead frenzy. The film even performs a number of the zombie deaths during the mayhem from the point of view of the zombie which is genius and an amusing alternative to typical zombie bashing. 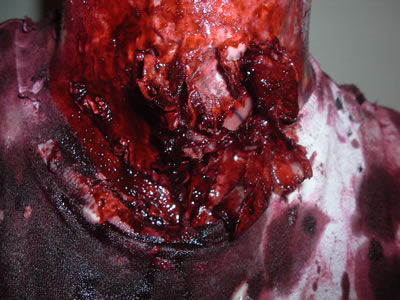 The plot for Vs. the Dead is a bit overwrought. It spends way too much time in the beginning getting the toxic serum to the tattoo parlor. It is silly and boring. Then it meanders around at the pizza shop attempting to set up the characters: the shop owner, his two employees and the hoodlums that loiter inside the restaurant. It never amounts to much and the characters don’t become interesting or even defined until they are forced to face the zombie threat together instead of always confronting each other. The film is much more successful as the zomedy it becomes then the straight comedy it starts out as. The first half is a challenge to sit through, but the second half makes the effort rewarding and is full of zombie goodness. Once the first zombie rises, the film takes on a different tone, one that makes the remainder of the film a blast to watch. 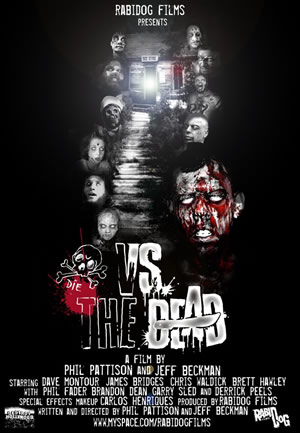 A low budget guilty pleasure, Vs. the Dead is a poorly pace, badly acted, roughly plotted, zombie monster-fest worth searching out and enjoying with a close group of friends. The first act will test the patience of even the most die-hard zombie fan, but the rest of the film is full of zombie gore, enjoyable characters and zany dialog. It even overcomes its forced, rarely effective grindhouse approach to film stock with forced jumps, blurs and scratches. After a bit, this unnecessary addition become less and less annoying and manages to help create an 80’s direct to video flavor comparable to Evil Dead weighing in on the Troma side of the fence. Great zombie kills, plenty of gore and an underlying sense of madness help make Vs. the Dead an enjoyable horror comedy that should leave a smile on even the most hardened horror fan.