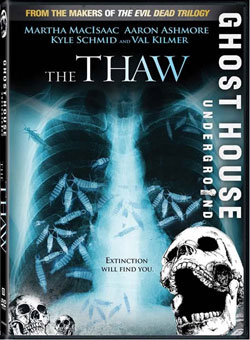 When a team of ecology students assisting an environmentalist (Val Kilmer) in the Arctic uncovers the frozen body of a woolly mammoth, they unwittingly release a parasite in need of a new host — and, in the process, unleash a prehistoric terror. The ante is significantly upped when the parasite takes refuge inside the students’ warm-blooded bodies and leads the group to a heart-wrenching decision.

QUICK FIX:
A renowned Professor and his crew discover a prehistoric parasitic bug in the carcass of a mammoth up in the Arctic, supposedly thawed and brought to the surface by global warming, just as a new batch of students are coming up there to study with him. Will they be able to contain the spreading of the bug before it destroys mankind? Will the students become the new hosts for the parasite once it takes over all the polar bears? Will I be frustrated to tears from getting preached at for 90 minutes about the dangers of global warming? Survey says….

RAMBLINGS:
Yes, I truly understand the use of filmmaking to get across social agendas. When some folks have something to say, like maybe the Baldwins or Sean Penn, they call a press conference or babble on at ceremonies when they should instead be announcing the winner of the Best Cinematography Oscar. Others put social commentaries into their movies in order to get the point across to the masses and hopefully wake up enough people that they jump on board said cause and maybe get something positive done as a result. I get that, and I have no problems with that, IF the message can be gotten across to even the most stubborn, hard-headed jackasses out there (like, oh, maybe me) with poise and subtlety.

As hard-headed and sometimes “DUH” as I can be now and then, I don’t need nor do I want my movies, especially my beloved horror movies, where I go to actually try to ESCAPE reality and recharge my batteries a bit, to hit me repeatedly over the head with a Paul Bunyon-sized sledgehammer like I’m an 8th grader in Algebra class just to drive a point home for me. Call me crazy, but that’s just the way I’m wired. And contrary to the current popular opinion, I’m not that stupid either. I can enjoy it when it’s there, sometimes I look for it, and maybe I’ll even theorize on it when I’m feeling froggy, but to be continually preached at scene after scene after scene…doesn’t work for me.

In the acting department, I had nothing to complain about…the ladies were pretty, the gentlemen were handsome, and they all did what they had to do. It did finally dawn on me though, that one of my favorite actors from my teen years in the 80s and beyond, the great Val Kilmer, of course, is in one of those dreaded career droughts that John Travolta experienced about 20 years ago before his career was revived by Tarantino and he found new acting life playing larger-than-life psychos. I was sure that Kilmer was going to see the same kind of career resurgence after his hilarious and Award-worthy turn in Shane Black’s KISS KISS BANG BANG, but sadly it seems he didn’t enjoy the same form of revival from that movie that his co-star, Mr. Downey Jr, has since, and that’s sad. Now the great and powerful Val is in a string of direct to DVD action and political thriller movies that barely make it onto even my radar, and that breaks my cold, black heart.

The co-writing/directing Lewis’ (not sure if they’re related, couldn’t find it online to clarify that) had a great idea, and for the most part they did pull it off. There were great effects, some tenseness in the right places, and even a couple of very realistic, wince-inducing scenes, which isn’t easy to make me do, but the whole parasite subgenre can have that effect on me when done right, and I’m happy to say that as far as that part goes, they did.

LAST WORDS:
The creative team had a point they wanted to get across, and I can respect and appreciate that. But, for the same reasons that Segal’s ON DEADLY GROUND and Romero’s DIARY OF THE DEAD (ok, DIARY would have sucked no matter what) lost me in the end is that they seemed to want to drive their point home with blunt force trauma instead of letting it subtly sink in the way really good thriller/sci-fi/horror movie with an agenda will grab you in the end like a doorman when you try to sneak out of a strip club after short-changing the peelers. This flick could have very easily turned into a clone or rip-off of JC’s THE THING from ’82, but it didn’t – it branched off and did its own thing, and for that I respected their vision and what they tried to do. But the heavy-handed preaching and lack of Val Kilmer screen time, which should have been capitalized on more than it was in this announcer’s humble opinion, ultimately turned me off from this flick and because of that the overall experience that I should have enjoyed more only wound up leaving me emptier than Paris Hilton’s skull.