Film Review: Sometimes They Come Back (1991) 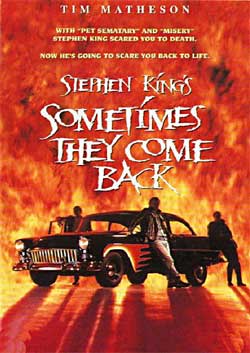 Based on stories by horror master Stephen King, this chilling pair of features follows two men beset by vengeful spirits. In Sometimes They Come Back, schoolteacher Jim Norton (Tim Matheson) must confront the literal ghosts of his past. In the sequel, John Porter (Michael Gross) returns home after a long absence and stays to help his town fight a sinister battle. Hilary Swank co-stars.

Sometimes They Come Back starts with Jim Norman (Tim Matheson) pulling into his new home in the town he was born. Jim was forced to take a job teaching in his old hometown, because of an unknown incident in Chicago involving his temper. Through Narrative voice-over and dream flashbacks we learn what happened to Jim all those years ago when he was nine. Norman’s brother Wayne was murdered by a gang of toughs in a train tunnel. One of the toughs dropped the keys to the car and they all were killed by an oncoming train, except Car Mueller, while Jim ran away.

Jim gets to know his class connecting with some students while butting heads with others, notably Chip the quarterback. The story progresses when one of Jim’s students, Billy (Matt Nolan), is run off the road by a black muscle car from the 1950’s that only Billy and Jim could see. Billy is killed and is replaced in class by Richard Lawson, a transfer from Milford and also one of the punks that killed Jim’s brother 27 years ago. Quickly two other students are killed then replaced. His student Kate was found hung in a barn and Chip was abducted by the gang, dismembered, and thrown off a bridge after trying to warn Jim Norman about the gangs plan. Jim finds the old police officer assigned to his case 27 years ago in a retirement home. Old Officer Neil reveals that he saw Jim’s brother, Wayne, when he was legally dead after being shot during a burglary. Wayne wants things settled. The gang then abducts Norman’s family so Norman is forced to recreate the confrontation with the gang in the tunnel his brother died in, including finding Carl Mueller and convincing him to return to his past.

Everything about this movie is fine, but that’s all it is. Any originality the short story had was squeezed out of the mini-series. King can write emotionally driven dialogue without the cornball factor coming out, but the teleplay was riddled with hokey dialogue especially in the flashback sequences between young Jim and young Wayne. We are exposed to Wayne saying to Jim over and over again “you and me Jimmy we’ll always be together” as little Jimmy would tag along with his brother everywhere he went. I have never met an older brother in real life that ever came anywhere near the hokey closeness these two shared. Tim Matheson did do a good job in the classroom scenes as the short tempered teacher who faces a group of prick teenagers. Frankly, Matheson had a lot more chemistry with the actors who played his students than the actress who played his wife, Sally (Brooke Adams).

It seems like there were several forced horror movie moments added into the film in order to insure its audience that this was a horror film and not just a film about a crazy teacher. For instance Jim walks into the bathroom and sees the gang sitting there then glances over the mirror and sees no reflection. The other case was when the gang abducted Chip; they dared each other to show Chip the face trick as they sarcastically applauded his bravery. The gang proceeded to transform their faces into the charred versions they received from the accident. There was no doubt in any audience members mind that the gang of punks that transferred from Milford were the ghosts of the punks featured in the flashback.

Overall Sometimes They Come Back is fun in the same way It is, a lot of “that guy” actors filled with hokey dialogue and a predictability that insures you’ll stay until the end.