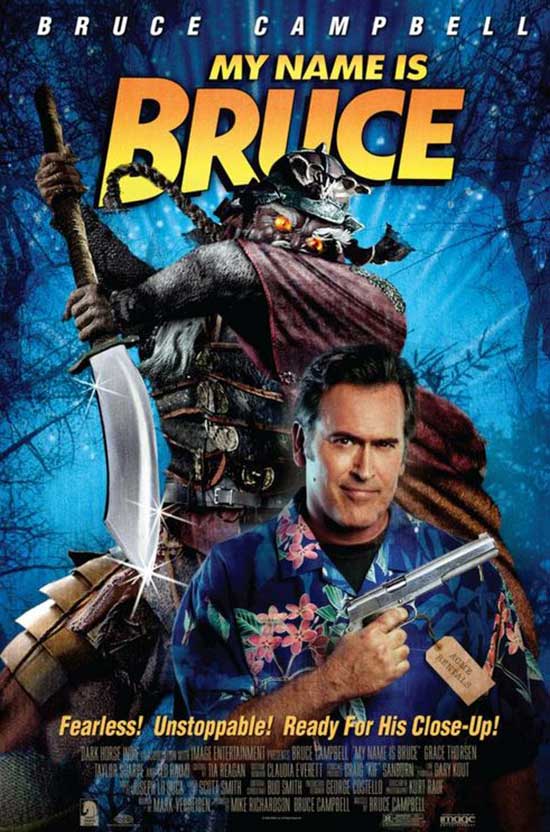 Mistaken for the character he plays in the Evil Dead films, B-movie icon Bruce Campbell (playing himself) is kidnapped by the citizens of a small mining town who want him to save them from a vengeful demon. At first, Campbell thinks it’s all part of an elaborate prank. But when he realizes the demon is in fact real, he comes face to face with a second terrifying enemy — his own fear. Ted Raimi co-stars in this tongue-in-cheek comedy.

As a horror fan and pretty consummate viewer, I can tell you I love a good horror comedy! Mostly because it helps take the edge off of constant slice and dice watching’s when you can get the slice and laugh about it intentionally. “Mr Name is Bruce” is no exception. This film rocks by all horror comedy standards. For horror fans this film “should” be a blessing in disguise. But let me explain…..

There’s no denying the impact Bruce has had on the horror film community whether spectacular or not. His role as “Ash” from the Evil Dead films has firmly planted him as a horror icon with even a line of dolls featuring him. So what a clever idea to present a comedy film with Bruce playing Ash playing Bruce! Now I know it isn’t marketed that way, though the dialog within is classic “Ash” or Bruce…whatever you prefer. Bruce playing himself is portrayed as a struggling horror actor with both success and failures even including the “actual” films he’s been in. Call it somewhat of a movie within a movie. The movie follows his day in life as an actor going from film to film and dealing with Hollywood-isms along the way. Confused yet? Well to clarify its a fictional-nonfiction type of film though not a documentary. The humor part is Bruce who has taken his “Ash” role and dialog as a his own persona. So lines like “Gimme sugar baby” are pretty much his onscreen fictional persona ….pretty cool eh? 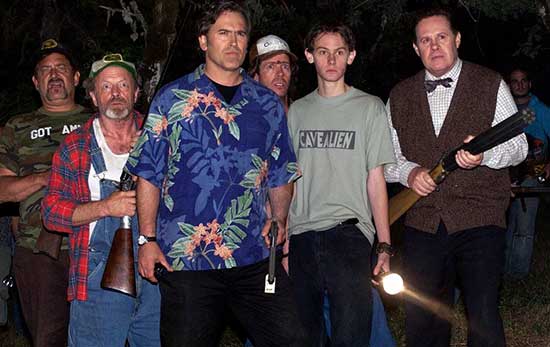 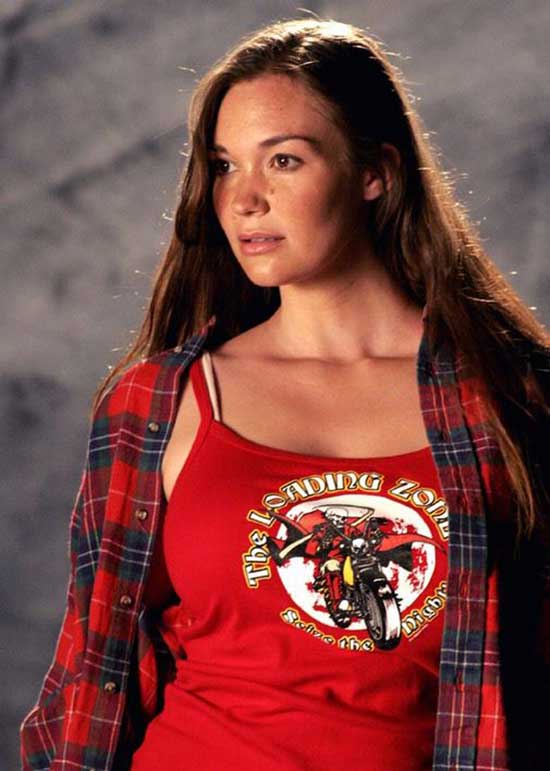 Needless to say, just that idea alone and Bruce interacting with life will keep ya rolling on the floor. Now this is only a portion of the film. The real plot lies in an old ancient samurai demon who has come back to slay intruders upon being woken from its slumber. I don’t think I’ve seen anything closer to a real scooby doo scenario than the creature and his wrath. Cheesy yes….. though that was the intended presentation. So cheap quirky monster uniforms are part of the films humor. On the eve of Bruce’s birthday he is recruited to help the small town do battle against the undead. Enlisted based on his film character motif, the town assumes Bruce is a real life warrior who could save the day. Bruce oblivious to the reality accepts thinking its another film gig.

Die-hard Bruce Campbell fan Jeff (Taylor Sharp) has managed to kidnap Bruce in order to save the day. Additional humor is presented in the personal bedroom shrine he welcomes Bruce into, including dolls, collectable and Fangoria covers abound. (An obvious nice bonus endorsement for the magazine) 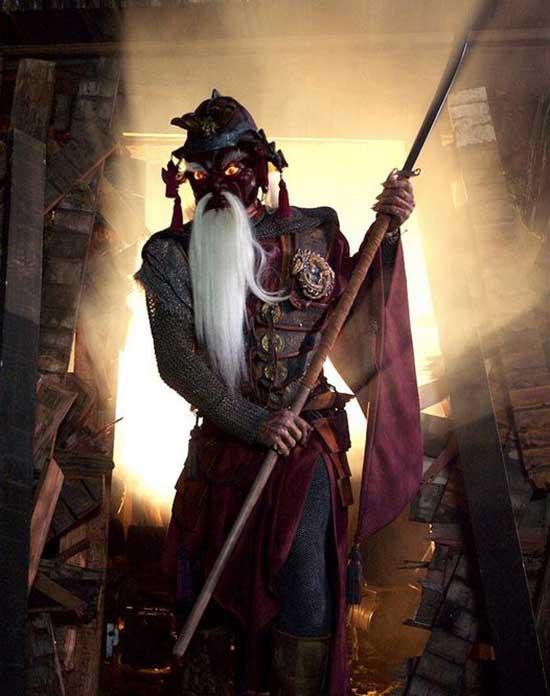 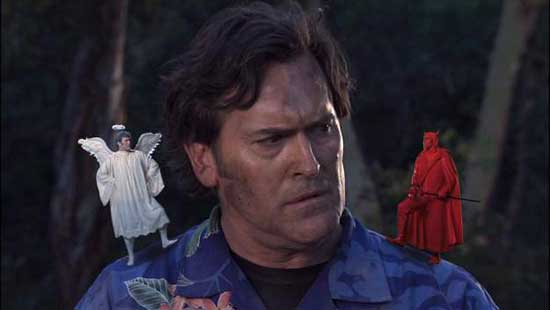 What transpires is a bit of tongue and cheek humor as Bruce assumes he’s on a gig and the town assumes he’s for real. The war is on as Bruce takes on the asian spirit by the name of Guan-di, the Chinese protector of the dead with a strange affinity for bean curd. Alot of goofiness is played up along the way. Bruce looked upon with god-like status as the town caters to his every need. When the truth finally is apparent, Bruce has no choice but to face his fears and become the hero he was intended to be. Additional appearances a made by actor Ted Raimi. 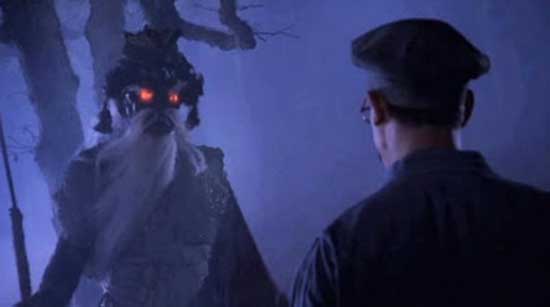 I absolutely loved Campbell’s performance in this film! We Army of the Dead fans may have not gotten our long awaited part 4, though we can still relish in the “Ash” played character in this offbeat comedic horror romp. The DVD also includes a nice bonus! A full DVD sized 24-page comic book! 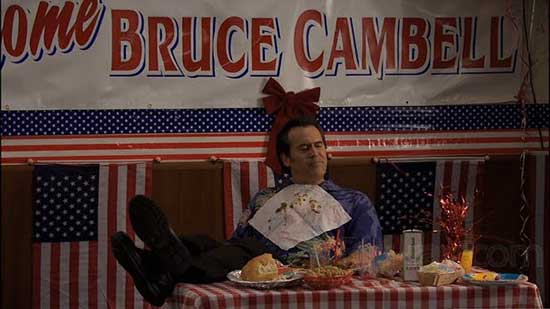 Now the obvious question for me would be, this film is dated as being a 2006 production. Where the hell have they been hiding it for the last 3 years…..?? c’mon Hollywood, give Bruce some props and ease up on the cheesy fast buck sequels you’ve been shoving down our throats. Witty, charming, a roll on the floor adventure …I don’t see how anyone couldn’t love this gem! As they say Bruce is back and he’s taking names! I’m looking forward to seeing this blossom into a full Bruce-paraphanelia franchise!!…onward!!!