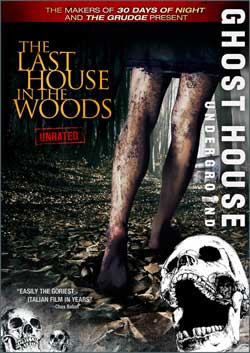 Young lovers escape a group of bullies seeking to harm them and then take refuge with a seemingly kind older couple. All too late, we discover that this older pair has a dark hidden secret which unfolds in the quiet, secluded Last House in the Woods.

There are plenty of examples of exploitation films where the poster and advertising end up better than the movie itself. With The Last House In the Woods, I believe we have a case where the advertising actually does the film a disservice. The image on the cover itself, the bloody, battered legs of a woman, presumably stumbling away in the woods, is reminiscent of the typical rape-revenge style artwork you’d see on numerous VHS covers at the old video store. Across the top of the picture, a red banner states that the film you are thinking about purchasing is brought to you by the makers of 30 Days of Night and The Grudge. 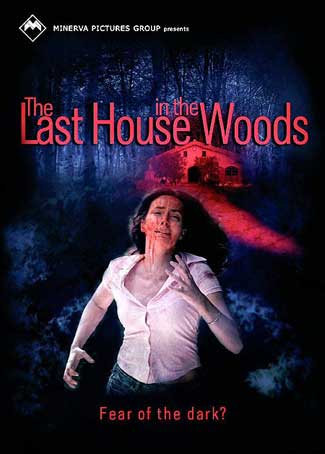 Of course, the psychology behind advertising is to put in your mind things you are familiar with, that you already like, and so associate those positive feelings with the new, unfamiliar product you are considering. Well, nothing against those films mentioned above, but this Ghost House Underground release is not at all like either one of them. In fact, it is far more off the wall and gore splashingly extreme than both of them combined.

Originally titled Il Bosco Fuori (or Out of the Woods; in Russia, it is called The Last Refuge, while in Japan it is appropriately named Italian Chainsaw), The Last House In the Woods is Italian director Gabriele Albanesi’s first feature-length film. And let me tell you, it is a fun one that starts pretty quick (albeit a little low on the lighting) and just keeps building steam for the next eighty-five minutes. 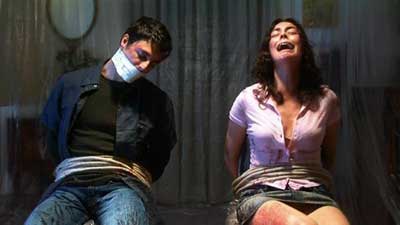 After a foreshadowing intro involving a car wreck and a child running off into the woods, we meet our protagonist, Aurora (Daniela Virgilio), and her ex-boyfriend, Rino (Daniele Grassetti). What begins as a conciliatory conversation between former lovers turns into sex in the car on the side of the road. That quickly turns into an ambush and beating as three drunk, sex-crazed, pill-popping bro’s drive up and pull them out of the car. And then THAT quickly turns into a stand-off as a couple pulls up and stops the imminent rape and brutality with good timing and a pointed gun. After the bro’s leave, the couple (Antonio and Clara, played by Gennaro Diana and Santa de Santis, respectively) offer to take the injured couple to thir home to let them rest and bandage their wounds. They accept, and all hell breaks loose. 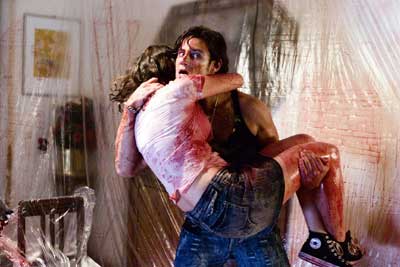 It pretty much all starts going bad when Aurora and Antonio’s kiss (what?) is interrupted by Giulio, Antonio and Clara’s son. It’s not so much his sudden appearance in the room that sours the mood for Aurora, it’s his crazy teeth. And is that blood around his mouth? What exactly is going on in this house?

And where is Rino? And why were Aurora and the much older Antonio kissing? Well, you don’t watch professional wrestling for its sportsmanship, and you sure aren’t going to watch a splatter-gore horror movie for its tightly woven storyline. But I assure you, thanks to the crazy imagination of Albanesi (who also wrote the film) combined with the always-amazing effect work done by the team headed by Sergio Stivaletti (his masterwork can also be found in numerous Italian giallo and horror classics, including Argento’s Opera, Bava’s Demons (1 & 2), and Soavi’s classic Cemetery Man), we’ve got ourselves a gorefest of maniacal proportions. 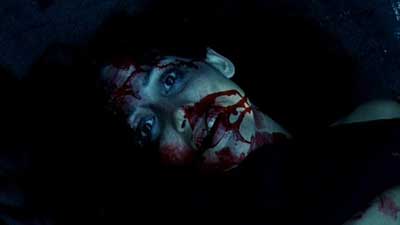 I don’t want to give too much away, because The Last House In the Woods is a fun ride that I don’t want to ruin for anyone.  But suffice it to say, many of the characters from earlier in the film (unless we’ve seen them die) do make a comeback at one point or another as the story gets weirder and weirder. We meet some backwoods folks living in a trailer that remind me of the crazy mutated people in Body Melt, but without the Aussie accents. 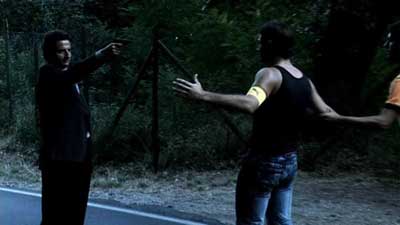 As often happens, there’s a dinner table scene taken straight out of Texas Chainsaw Massacre, but in this case one that is creepy on a different level than most. And, oh man, the gore. So much great gore! Guts are hanging out, limbs are chopped off, heads are crushed, and blood is everywhere. And all in an obvious homage to the great Italian offerings of old, complete with great synth music and those “are these voices overdubbed or not?” vocal intonations we’ve come to love and expect. 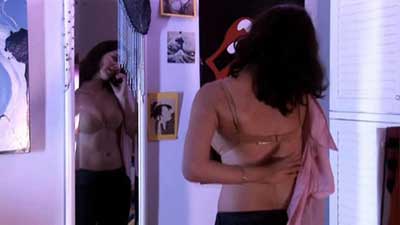 I remember always seeing this one on the shelf of the old used DVD store I used to frequent in Waukegan, Illinois, for around two bucks. I always passed on it. Thought it looked too cheesy. Now I regret that mistake. If you see this movie at your local store, don’t be like me, pick it up! It’s fun, it’s gory, it’s ridiculous, and it’s a great addition to any horror fan’s collection. Plus, I just saw where they are making a direct sequel called *SPOILER ALERT* Kid In the Box and it looks amazing! 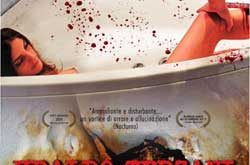