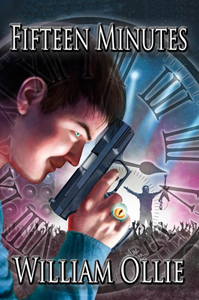 It is a ring, forged deep within the jungles of Ecuador, centuries ago.

Sixteen-year-old Simon had no idea what he was getting into when his mother packed him off to spend the summer at Granny’s house.

The first thing he noticed was the hip clothing, the uncharacteristic sultry language and wild, futuristic hairdo. The second was the cool ring she wore.

The power to become another, to ward off an enemy by becoming that enemy.

Now his grandmother is dead, and if he hadn’t killed her, he’d certainly had a hand in her demise. He should’ve been horrified at what lay before him, dismayed at the part he had played. But he was neither of these things. He was excited, elated, because what lay before him was not his dead grandmother, but a mystery as deep as the meaning of life itself, an adventure of a lifetime.

One he can’t wait to embark upon.

“Fifteen Minutes” is Dark Regions second offering in their new Dark Thriller Line and it is no secret to me why they chose William Ollie for it. Simply put, William Ollie is one of the new rising stars in dark fiction today. Everything that I have read by him so far has been exceptional.

“Fifteen Minutes” is one hell of a book, showcasing Mr. Ollies continuing development as a writer. It grabs you right from the first page and keeps you riveted throughout the story as the main character goes from one misadventure to the next.

This book has everything you could want; great characters, (especially Simon), violence and gore, sex, drugs and rock and roll, crime lords, strip clubs and a supernatural ring that will grant your very desire. He ties everything together beautifully as you turn the pages at a frenetic pace to find out what happens next.

Dark Regions Press continues to bring us outstanding fiction and William Ollie’s “Fifteen Minutes” is no exception. I think it is Mr. Ollie’s best to date.

If you are looking for something a little different and fun, you would be doing yourself a disservice if you don’t head over to Dark Regions site and order “Fifteen Minutes”, I highly recommend it.