Home | Zombies Trail a Blast of Artic Weather in ‘WINTER OF THE DEAD: METELETSA’

Zombies Trail a Blast of Artic Weather in ‘WINTER OF THE DEAD: METELETSA’ 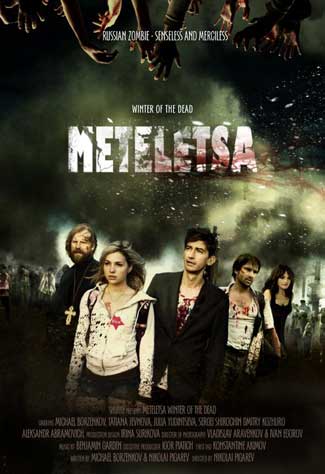 The zombie cravings have made it all the way to Russia. Billed as the first ever Russian zombie movie, WINTER OF THE DEAD: METELETSA is set during one of the hottest summers on record in Russia, and then the unthinkable happens. It begins to snow. In an interesting twist on the infected rain method used in such films as RETURN OF THE LIVING DEAD, this snow ushers in a zombie horde, but it is uncertain if this snow caused the zombie infection or if it was just a warning of the impending zombie plague. Directed by Nikolai Pigarev, WINTER OF THE DEAD: METELETSA stars Michael Borzenkov, Tatiana Zhevnova and Aleksandr Abramovich. To learn more about this film check out the Official website: www.winterofthedead.com/ or you can like WINTER OF THE DEAD: METELETSA on Facebook: www.facebook.com/Meteletsa

Synopsis:
“Russian Winter is a terrible thing…… especially if it arrives in mid-July. “Along the street a snowstorm sweeps, behind the snowstorm … something ghastly creeps!” Konstantin – a Moscow journalist, hides from the onslaught with the daughter of a local tycoon in a hardware store. Captain Igor Knyazev kranks up the only working tank, whilst his lover, Dasha is running away from her angry husband, who has learned of the pair’s betrayal, and wants revenge, regardless of the weather … Faced with horrifyingly gripping news material, a dedicated cameraman, Vlad, captures the strange events on video as priest Father Michael gets out his trusty axe … Out amidst the icy storm, something raises its hideous head – a Russian zombie – senseless and merciless!”

Tags METELETSA Winter of the Dead