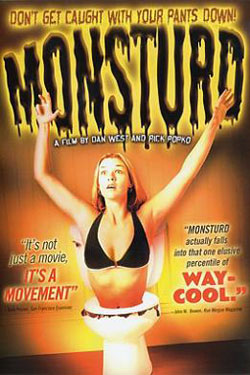 Escaped serial killer Jack Schmidt is on the run from the police and FBI after escaping from jail. They corner him and gun him down in a sewer tunnel, where he falls into a pool of chemicals dumped by the company who created it, Dutech. The combination of feces and this chemical transforms him into a half human, half feces creature, who goes on a killing rampage. And it’s up to a group of local law enforcers to stop him

The film begins at the Dutech Biohazard chemical plant where the crafty Dr. Stern (Dan Burr) is brewing up some kind of monster formula. Experimentation with multiplying microbes is unleashed on his assistants to test the effects. The goal, as it’s narrated is to create horrible things to sell to the government.

The sh*t hits the fan (literally) when the chemical formula is dumped into a nearby sewage drain in an effort to dispose of some rather incriminating evidence. It just so happens that at the same moment escaped serial killer Jack Schmidt (Brad Dosland) is on his way to freedom as the law enforcement’s chase him down into the “same” sewer drainage where these chemicals were disposed of. One thing leads to another and the shot down Schmidt is killed and corroded by the wastes as his DNA merges with the monster formula that Stern invented.

As you can guess …and only in the movies….poop man is created bent on wasting away anything in its path. The common means of travel seems to be appearing in bathrooms per toilet arrival passages. A sh*t storm is left in his wake as he murders his victims and leaves a nice crappy message on the bathroom walls. Soon the whole town is advised to stay away from toilets as more bodies turn up dead.

The local law enforcers of Butte county put 2 and 2 together pretty quickly to embark on a search and destroy mission against this purveyor of bad smells and nasty excrement residues. You hear the reference of “sh*tman” enough to where it starts to lose its charm after awhile. An FBI agent Agent Hannigan (Beth West) is brought in to aid the local police and a plan is set into place.

The 2 cops Deputy Dan (Dan West) & Deputy Rick (Rick Popko) are your usual brand of bumble foots practically right out of “Reno 911” type humor who come up with the hair brained idea to kill off sh*tman at the local Chili Cook off. By creating laxative pellets and harnessing flies they propose to eliminate the sh*tman with his own medicine. The costume used is probably the funniest of the batch as its a a big foam rubber poop shaped outfit with slimy excrement smeared all over it. if not for the slimy overlay it easily could stand in as a GWAR member. No CGI was used, so sh*tman is 100% practical effects. In fact you might find yourself comparing it to a villain straight out of Godzilla movie.

I’m a big fan of horror comedies that work. “Monsturd” if you hadn’t guessed is marketed as a horror comedy sporting a villain who is literally a big piece of sh*t. This film was the first release from the director writing team of Rick Popko and Dan West.

A team who went on to make 2 more films of which “Retarded” being there most recent, Monsturd has its moments though I didn’t find it as funny as it could of been. The obvious poopoo humor has something to give to fan boys who giggle over excrement scnes…but really the humor was a bit dry and unclever. In fact, I found it confusing at times as it really is presented more as a serious film with a ludicrous subject.

It’s the teams first effort, so I know from seeing recent films that follow that the humor portion has gotten up to speed. The idea is certainly silly enough to attract casual viewers who like there viewing’s served up sh*tty (sorry…couldnt resist).

Though in all fairness it was just an ok film that just needed more gags thrown into the script to get it to where it should be. Probably the serious nature at times threw me off as the script could of used alot more poop gags and clever lines. I’m going to recommend there recent release of “Retardead” over this one which actually is a form of a sequel to this sh*tty film (ok….somebody stop me now!) Horror comedy is alot of fun, when it’s clear that the direction is geared towards that but if the writing is not as funny, it can get a bit boring to watch.

Well, Monsturd is a reviewer’s dream with the amount of poop comments you could instill. In the end, “Monsturd” was cute but not a keeper. Probably though deserves a watch so that you can sat that you’ve “now” seen everything!