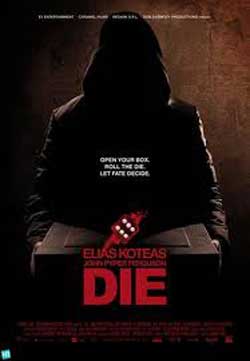 Six people who have each attempted suicide find themselves being held prisoner by a psychopath and forced to play a deadly game. Each person being held captive must roll a die to decide the fate of their companion, and they have no choice but to do so under threat of death at the hands of their captor. Will anyone survive, and if they do will they ever be the same again?

When I first heard what “Die” was about the first thing that crossed my mind was that it was nothing more than a “Saw” rip-off. I went into it with less than high expectations and was pretty sure that it was just going to be another poorly done “Saw” clone and nothing more. I couldn’t have been more wrong. While the basic premise may be similar to “Saw” it is by no stretch of the imagination just a poor imitation. I thought that it was a pretty good movie and in its own way it was pretty original. Once you get past the whole “it’s a movie where people are forced to play a game or die” and give it a chance it isn’t a bad film at all.

I think that what makes this movie good is the basic idea behind it. The people being held captive are forced to roll a die (there is a back story as to why the guy holding them hostage makes them roll a die, but I’ll let you find that out for yourself when you watch it) and then the outcome of their roll impacts someone else. For example, a man has to role a die and what number it lands on he must put that many bullets in a gun and shoot at the person. Another woman has to roll the die and what number it lands on depends on how many minutes a man has to be submerged under water (if it lands on 1 it is only one minute, 2 is 2 minutes and so on). I just thought that it was a cool idea that hasn’t been done before as far as I know and it was fun to watch the outcome of each roll of the die. I’ll give it to the writers that this is a pretty cool concept for a film and I think that most viewers would agree.

It isn’t ultra violent, but I was so into the story that I didn’t really mind this time around (normally I am one of those people who thinks the more violent and gory a movie is the better). We get a guy getting his brain blown out, a drowning, and someone who has a large portion of their blood drained from their body but other than that there wasn’t a great deal of slicing and dicing. The deaths are pretty subtle, but I thought that it worked considering the overall tone of the movie. I think that if the death scenes would have been over the top hardcore and blood drenched that they wouldn’t have quite worked. The movie has a more realistic feel to it and I liked the fact that the filmmakers didn’t try to make the deaths super violent and gory (wow, being a gore hound myself I never thought I would make such a statement. The end of the world may be nigh, fellas).

I really liked the cast of characters as well. Elias Koteas (who is looking pretty rough and worse for wear these days) is top notch as Mark, the suicidal cop who is under investigation for killing someone. Emily Hampshire is also equally good as the woman who isn’t so happy to be a mother who suffers from a gambling addiction. The person who steals the show though, is John Pyper-Ferguson who does a great job playing the demented antagonist Jacob. I thought that this character was just kick ass and he would make a perfect Batman villain. I wouldn’t necessarily say that he is an evil person as in his sick and twisted mind he thinks he is helping the people he abducts. He has a pretty cool back story and he is just so insane and out there you can’t help but like him. Though his methods may be a little unorthodox I think that deep down he truly wants to help others, so in my opinion I can’t really say that the character is a bad person.

I thought that the ending was great as well. There are a couple of pretty cool twists toward the end that I didn’t see coming and both of them work. I am not going to say a word about either one as I want you to find these out for yourself when you watch them, but let’s just say that at least one of them comes completely out of nowhere and I could actually see it happening in real life. The ending leaves things open for a sequel, and I really hope that the filmmakers follow through. I know I wouldn’t mind seeing the next chapter of the story.

I was really into “Die.” While it is more of a thriller than a horror movie I still thought it was good and I enjoyed it. Some people may not give it a chance as they may dismiss it as a “Saw” knock off, but I assure you that isn’t the case. It is well-written, suspenseful, and has a couple of cool twists that make you think. I urge you to check it out. I think that you will be pleasantly surprised.