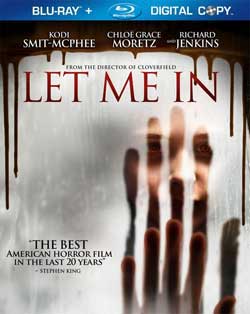 A bullied young boy befriends a young female vampire who lives in secrecy with her guardian.

OK, my children. Here is a review that the Black Saint endured hell & high water to get to you. Hell is ok…high water, not so good. But it matters not because I like to give you guys the lowdown on what I think is going to be interesting anyway & “Let Me In” a remake of the Swedish “Let The Right One In” is very interesting.

The story (for those morons who haven’t seen the original, yeah I said morons) is really very simple sounding on paper: A boy who is constantly bullied at school & spends all his time alone in an empty playground behind his home befriends his new neighbor. She’s sweet & only comes out at night & isn’t crazy about wearing shoes either, even though there’s usually about 6 inches of snow on the ground throughout the film. She is a Vampire & wants to keep a low profile.

The boy is played by Kodi Smit-McPhee & he is perfect in the role. He’s a small, underdeveloped youngster making his way from child to teenager & all the problems that come along with that transformation (mostly hormonal). Our lovely vamp is played by Chloe Moretz & I do believe I have a crush on this little girl. She blew me away in “Kick Ass” &she blows me away again here. She maintains her tone throughout the movie & that’s important because as a Vampire, she has no real emotions just hunger. As a matter of fact on their first meeting she warns Owen(McPhee) that they cannot be “Friends”. She knows what she is & what she has done in her past & more importantly..what she is capable of.

The beauty of the character (Abby) is that she too is at that age where little girls become teens as wee. So in a sense she’s going through the same hormonal changes that all kids go through at a certain age. But she’s stuck at that age forever & has to distance herself from it at all costs. She doesn’t even know how old she really is. She claims to have forgotten her birthday. So it’s possible she’s hundreds of years old forever to be trapped in the body of a 12 yr. old girl. That in itself is a form of torture. To see everyone around you age & eventually die yet you live on, without aging. She cannot form relationships because they will never last. Much like Catherine Denueve in “The Hunger” who kept all of her lovers in the attic. She loved them too much to let them go. Moretz’ performance really delivers on that loneliness that must come with her existence.

Abby is accompanied by a gentleman who Owen calls her father but we really don’t know who he is. He might actually be her father & Abby might have been turned not too long ago. Or (as I believe) he is one in a series of people who have helped Abby over time to survive. Much like Renfield was to Dracula. It’s funny, as the movie began & we got our first look at the “Father” character I thought to myself “This is a role that Richard Jenkins could play”. Not that I’m a Richard Jenkins fan but he is a fine actor who has that face..a worn out face. A face that just screams exhaustion. From what? Depends on the character he’s playing but his face has the gravitas the role called for. Lo & behold as I watched the credits it was Richard Jenkins who played the part. It’s kind of hard to recognize him through all of the makeup he’s wearing but it was him & he too is pitch perfect as the one who murders to get blood to Abby.

One of the questions I had with the first one still exists in this version. Why does Abby need someone to kill for her? She certainly shows a capability for it when she has to feed. I understand she needs the help for traveling purposes & for living arrangements but not for murdering people for her food. She is more than capable of fulfilling her hunger herself. The few scenes where she attacks on her own are vicious & bloody. She attacks & then sort of crawls all over you like an insect as you try to fight her off. She is relentless & will not be denied her meal though. The makeup for her (few) transformation scenes are effective if a little bit “Been there, seen that”.

Elias Koteas plays the cop investigating the murders going on (I should mention the film takes place in New Mexico, circa 1983). So there is a lot of 80’s music on the soundtrack. He’s adequate in his part & his final scene is awesome but he seemed to slow down the film for me whenever he showed up which thankfully (for me anyway) wasn’t too often.

One of the interesting things about the movie that I haven’t seen mentioned in any of the reviews for the original (I haven’t seen any reviews for this one just yet) is the homoerotic subtext that quietly raises it’s head whenever Owen is being bullied. He is a small, frail, sickly looking boy & his tormentors are larger & stronger. There is a locker room scene that really hammers this context home & in a sense it almost felt like a rape scene. But Owen is being raped on a mental level not a physical one.

Director Matt Reeves also wrote the screenplay & although there are a few slight changes from the original film. It seemed to me that he basically just changed the setting & then translated the original dialogue into English. That’s not to say he didn’t do a good job directing it. His camera moves are secure & swift, the scenery is beautiful (snow falling at night is always beautiful to watch) & he guides the cast with a steady hand & they respond with great performances all around. But I still got the sense that after the film was over, it felt more like the original with English voices dubbed in.

But I don’t think a lot of people here saw the original so that shouldn’t hurt it. The swimming pool scene at the end which was truly unexpected & vicious in the original is done basically  the same way here but it seemed less…violent to me & it seemed to go by quicker than in the original as well. But it’s effective nevertheless.

The scenes between the two leads are at first off putting because of Abby’s reticence to start a friendship with Owen but as the movie continues & they grow closer there seems to be a genuine warmth between them. But you have to ask yourself: is she growing closer to him because she actually cares or because she needs someone to fill her “Father’s” position? This matters to me because if it’s because she honestly cares that makes this a sort of pseudo love story. But if it’s an act & she’s just setting up her next “Renfield” then it proves that at heart she is a callous creature who cares about her own existence & nothing else. We are all just food for her & she needs one of us to procure it for her. The ending offers no answer to that question either. Just as in the original, the ending is vague & mildly disconcerting. We will never really know what Owen’s fate will be and as vague as the ending is, it’s the proper way to end the movie.

All in all “Let Me In” gets 4 1/2 shrouds from The Saint. It’s an intelligent, well done film that leaves us with more questions than answers but I wasn’t mad at that. It just ends the way it should I felt. Not with a sense of dread or of horror. But with a sense of melancholy because we’ll never know what will become of Owen & Abby. Only that they’re together….for now.