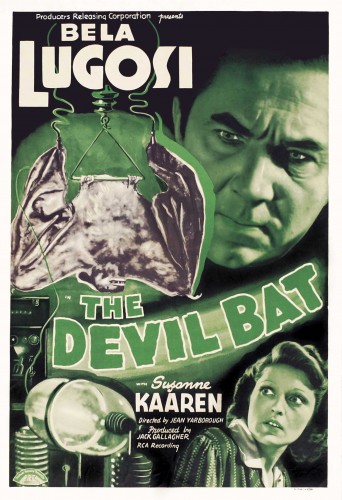 “Doctor Carruthers feels bitter at being betrayed by his employers, Heath and Morton, when they became rich as a result of a product he devised. He gains revenge by electrically enlarging bats and sending them out to kill his employer’s family members by instilling in the bats a hatred for a particular perfume he has discovered, which he gets his victims to apply before going outdoors. Johnny Layton, a reporter, finally figures out Carruthers is the killer and, after putting the perfume on himself, douses it on Carruthers in the hopes it will get him to give himself away. One of the two is attacked as the giant bat makes one of its screaming, swooping power dives.” (courtesy IMDB)

Anyone out there who has a phobia about bats should be cured in about an hour and a half, because after this week’s film I guarantee you’ll only be able to giggle uncontrollably every time you see one of the flying rodents. Yes, it’s the 1940 shocker The Devil Bat (1940) starring the maddest of mad scientists, the brooding Bela Lugosi as the seemingly kind Doctor Curruthers, attaching electrodes to the unlikeliest of chiropteran body parts. 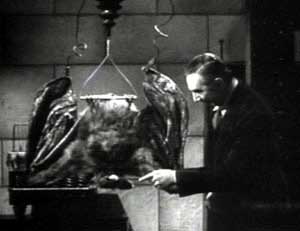 The Devil Bat was really the beginning of the end for Bela Lugosi’s serious acting career. Yes, he had one. Prior to this he maintained his dignity in films such as Dark Eyes Of London (1940) and even The Gorilla (1939), and gave possibly his best performance ever as Ygor in Son Of Frankenstein (1939). However, from The Devil Bat onwards, Lugosi’s roles became demeaning self-parodies, until the final indignity of his posthumous appearance in Ed Wood’s Plan Nine From Outer Space (1959), and it was probably good that he was dead, otherwise that would have killed him. As it stands, The Devil Bat with it’s ridiculous premise, less-than-special effects, questionable acting and direction, and non-existent continuity is a grim forewarning of Bela’s future. Which is not to say The Devil Bat isn’t extremely enjoyable to watch, but for all the wrong reasons. 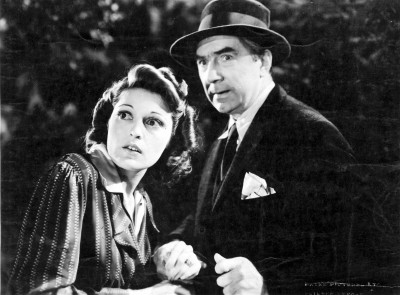 Speaking of the beginning of the end, The Devil Bat may well have been the career high point for director Jean Yarbrough, who followed-up this effort with the likes of King Of The Zombies (1941), House Of Horrors (1946), She-Wolf Of London (1946), The Creeper (1948), the final brick in the tomb being the self-explanatory Hillbillies In A Haunted House (1967). 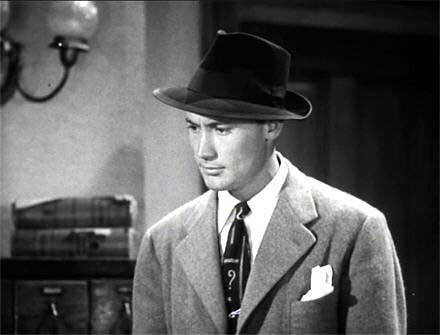 Ace reporter Johnny Layton is played by Dave O’Brien, whose career boomed in the thirties and early forties with the likes of Night Of Terror (1933), The Ghost Creeps (1940), The Spider Returns (1941), Spooks Run Wild (1941), Bowery At Midnight (1942), and Captain Midnight (1942), but you pot-heads out there might recognise him from the laugh-a-minute educational exploitation film Reefer Madness (1936), which I could swear I’ve seen, but for the life of me I just can’t remember. 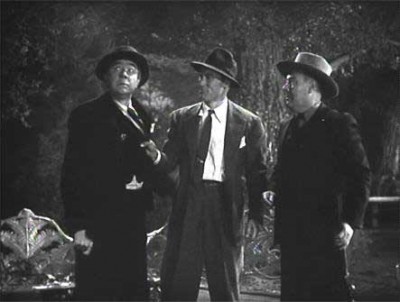 Guy Usher, who plays CEO Henry Morton, seems to have made a career of playing authority figures, like the Inspector in Charlie Chan At The Opera (1936), the Admiral in King Of The Zombies (1941), and the Senator in Junior G-Men Of The Air (1942). Some people just look like heads of one type or another, I suppose. 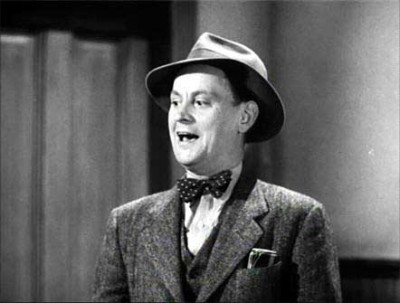 Donald Kerr represents the comic relief as photographer One-Shot McGuire. Why One-Shot? He doesn’t even take that many during the course of the film! He may not seem like much, but Donald Kerr was one of the busiest bit-part actors in Hollywood ever, infesting over four hundred movies and television shows. I’ll just list them all now…what? Of course we have room. Oh, all right, Donald Kerr’s films include Cat People (1942) and Flash Gordon’s Trip To Mars (1938) and he became a favourite of Bud Abbott and Lou Costello, with whom he got to meet with The Mummy (1955), The Invisible Man (1951), Doctor Jekyll and Mister Hyde (1953), among others. 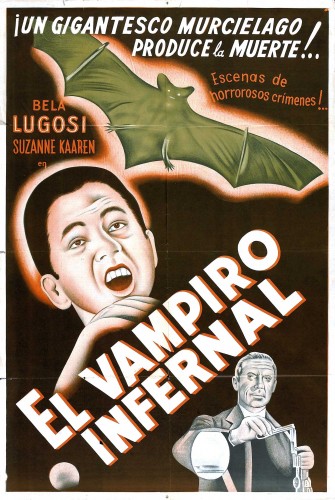 The Devil Bat is just over an hour long, though it feels a lot longer. That’s due to the fact that some scenes are a little padded. For instance, when we first meet Bela the film burns up several minutes showing him playing around with his Bat-Enlarging Mad Scientist Set, complete with spectacular and utterly pointless sparky things and big, important-looking switches. The Devil Bat itself is laughable, but ultimately forgivable. After all, its not like they had any CGI back then, and stop-motion technology was still a rare, expensive, time-consuming commodity in 1940, so when the monster attacks it’s like the victims are struggling with a starched leather coat. Knowing that Bela Lugosi would end up in Ed Wood movies emulating The Devil Bat and others of its ilk just makes it funnier. 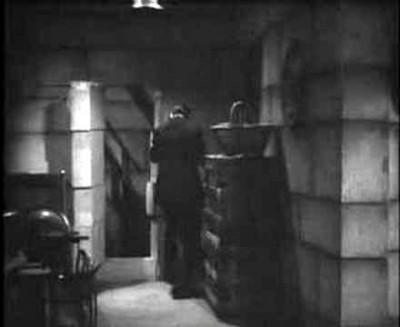 In all my time in the film industry I’ve seen some cheap and nasty bloopers, but The Devil Bat has got some of my favourites: Bela Lugosi’s house doesn’t match the exterior and interior shots. From outside it looks like a large house but the inside looks like a castle. Well, a castle set from a high school production of Camelot maybe. And when Roy leaves the house, he steps directly outside from what looks to be the Bela’s lab. Now, I don’t know anything about interior decoration or Feng Shui, but it looks to me like he’s set up his lab in his living room. That’s real dedication for you. 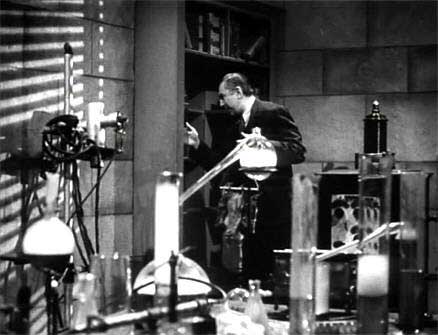 Tommy Heath sure spends a lot of time yelling when the Devil Bat attacks him and fails to kill him in the first swoop. I wonder why he just didn’t step into the house instead of standing there for fifteen more seconds allowing a second, fatal attack. After Tommy’s death, we get to see a long sequence of newspaper headlines announcing the “Mysterious Devil Bat Killed Tommy Heath”. When I say long, I mean it. Was life so boring in 1940 that his death made the headlines of several newspapers? I seem to remember a bit of fuss in Europe about a short fellow with a small moustache, for instance. And some of the newspapers we see are just plain wrong. In one it says reporter HENRY Layton, but as we all know, Layton’s first name is Johnny. Admittedly his name is corrected in the next article, but it’s still a blooper, so I’m going to point it out. 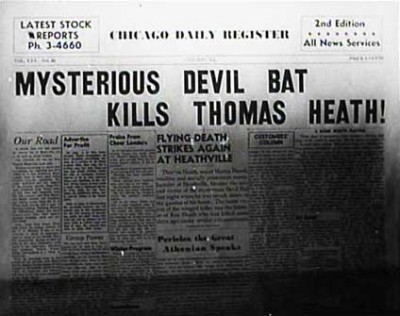 About half-way through you’ve got to keep an eye out for when One-Shot and Layton are holding vigil to try and catch the Devil Bat. One-Shot asks Layton what the time is, Layton pulls his sleeve back and says “After midnight” but Layton isn’t wearing his watch! He motions to look at his watch but you can clearly see that he isn’t sporting one, or maybe it had disappeared up his shirt sleeve, I don’t know. Did actor Dave O’Brien think that no one would notice? 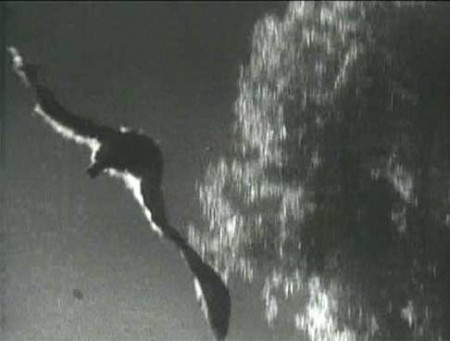 While trying to sort out Roy’s death, Mary, Carruthers and Layton discuss the events. They suspect a wild animal killed Roy. Layton says when an animal attacks a person there’s usually a lot noise, and Mary says there wasn’t any noise, “only those awful screams”. What? Awful screams aren’t considered noise? What kind of sound did she expect? Spike Jones and his orchestra? I would have thought awful screams might be at the top of the list of sounds you would expect to hear if someone were being slapped in the face by a gigantic overweight bat! 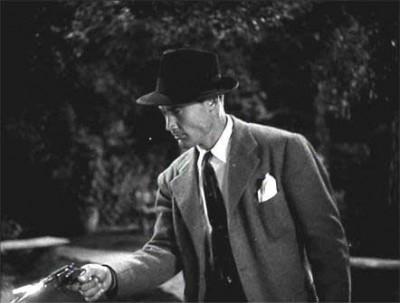 And how many bullets does it take to kill The Devil Bat, anyway? Layton shot it at least five times from a distance of about a metre. The really amazing thing is that Layton didn’t hit One-Shot in the groin aiming low like that, although shooting a newspaper photographer is quite understandable. It’s sadly ironic that poor Bela died penniless, yet is now considered such an icon of horror. When I think of Mad Scientists I usually think of Bela, I don’t know if it’s because he plays the role of a mad scientist so well, or because I laughed my head off watching him in Ed Wood films. Anyway, please join me next week when I have the opportunity to inflict upon you the tortures of the damned from that dark, bottomless pit known as Hollywood for…Horror News! Toodles!