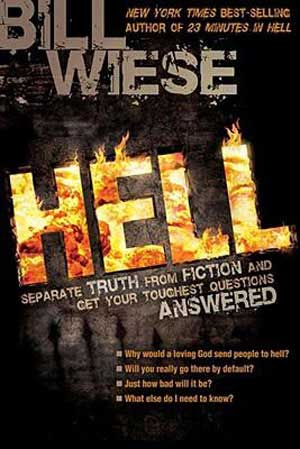 HELL:
SEPARATE TRUTH FROM FICTION AND GET YOUR TOUGHEST QUESTIONS ANSWERED (PAPERBACK)

A very striking cover with a very striking name. The book I’m speaking of is the recent release from Charisma Books titled. “Hell” by Author Bill Wiese. To bring you up to speed, “Hell” is the follow up book to his widely popular “23 Minutes in Hell” in which we have also reviewed. The purpose of this book is to pursue further down the road with explanations, questions and insight into the whole subject of Hell and God’s plan. As a reviewer, it becomes a bit of a 2 fold approach. For one there is the review of the book itself and 2 what is said and how that translates. With over 352 pages one thing is clear.

Bill has alot of answers and research completed to commonly asked questions. In fact my guess is many of these have been accumulated over an exhaustive tour of his first book. It appears that Bill has become somewhat of a “Hell” authority expert for good or bad and has found a need to address alot of concerns. I must say he does hit all the marks on this one. All those hard questions have been asked and so since spending 23 minutes in hell doesn’t make you an expert it does inspire one to seek answers to questions that so many require to feel better about themselves. If there is one theme pertinent to this book it is the idea that one must establish a relationship with God to avoid hell fire. This is stressed, repeated, and described in a 1000 different ways but it all comes back to the same simple fact.

Bill tackles the best of them. Chapters like “what christians need to know about hell”, “Hell by Default”, “How does God warn us?”, “how can demons torment?” and so on are included thoughout. It’s my guess that many will not like what Bill has to say. In 352 pages or less Bill says that virtually everyone is going to hell. Good, bad, sinners, alternate religions, you name it. I think maybe its a bit harsh at times and perhaps puts more emphasis onchristianity than anything but what I think Bill is really saying is those who don’t know God are hell bound. Bill dives into other subjects of interest like demons tormenting when they are supposed to torment. The difference of fallen angels and demons. The subjects of fire being metaphorical or real. Or anything written in the bible for that matter. Though one thing you have to give alot of credit to is Bill backs up stuff with Bible proof and other noted reports and quotes. He also dedicates a whole chapter to testimonies. A bonus I found interesting was Appendix C which is a listing of all verses of Hell and destruction in the Bible. Or how about the location of Hell? Bill suggests through scruptures that Hell is at our Earths core literally. Which would make sense with the heat and fire issue. I think I read that the Earths core is about 12,000 degress (supposedly)…ouch!

This is a fine well written book. It is heavily based in Christianity so if you are expecting a scene for scene horror show, this is not the book for you. In fact what you might be seeking is something that is based more on fantasy for in depth hell quests. There is of course alot of hell speak and chapters that deal with the devil, his influence, his demons and his plan. As Bill has shown us thru the scriptures, the God of this world is not God but the Devil. This is pretty remarkable statement that I’m sure will affect different readers different ways, Especially those who are not based in christian groundings. Though to read between the lines is the intention here meant by Bill’s words. That God is part of the after life and those who ignore that fact will make the only choice left. To be in hell and to serve under the darkness. Now as a reviewer I have to explain the facts as they are presented. How this information effects folks will run the gamut I’m sure. Though beyond just a religious take the content proves to be pretty interesting. Non christians may have to skip round a bit more to find the content they are looking for, but the purpose of this book really is based firmly in the Christian traditions and beliefs. You are left to decide how you persue what is suggested. At least the information is provided now to do just that. 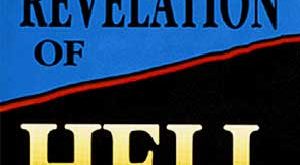