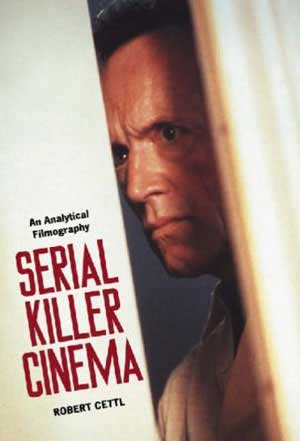 It only takes but a passing glance through this packed volume to know there is a wealth of worth to this book. With 566 pages, this 7×10″ with a 1.25″ inch width edition covering over 500 films covers alot of ground. The price tag of $50 may be high for some buyers, though I think the content backs the price pretty evenly.

What works to our advantage is that author Robert Cettl stretches the realm of what falls under the serial killer category. In fact many titles are serial killer only by association but would otherwise fall into a diff class of horror than say the obvious titles such as “Seven”, “The Cell” and “Fallen”. Then obviously it might be a much shorter book, though I’m sticking with the larger volume as it gives us alot interesting titles to check out and analyze. There was a little confusion on my part as to when the book was written as there are actually 3 dates in the book credits. Amazon says 2007, and since there are many recent titles in this book I’m going to stick with that. My guess is that the book has been updated over the years with new submissions. The listing calls out 576 pages but I only counted 566, so I’d stick with that. It also deserves a special mention that it contains a highly impressive index to seek out names and titles very easily. So keep this in mind.

Cettl starts with a very in depth chronological / historical analysis of the birth of the serial killer though cinema. Surprisingly enough, he takes you through the earliest of days from Jack the Ripper, to the simplicity of the vampire, werewolf and Dr Jekyll. Even though the term serial killer was a creation of modern classification, the signs of murder, and macabre were still very much apparent. In fact the term mass murderer would of probably been more fitting. Though the message is clear that the serial killer is a persona of evil primarily an aberration of man and his growth. Claims Cetty, as the 2oth century wore on, it became sociologically popular to hold the criminal as a threat to society, a monstrous figure who operated with different impulses, desires and values than ordinary men.

We also see how the motives began to take on new forms from the gangster criminals to the modern day criminals that killed for kicks or sexual motives. On of us as we call them. The scariest of all. The serial killer now was not a vampire sporting fangs or a machine gun but a psychopath that purely enjoyed the thrill of the kill for selfish reasons. Yes the everyday man now could become the monster we all fear. Cinema picked up on this fear and so the types of model monsters began to take on a new form. We also gave birth to something we hadn’t anticipated. The superstars of serial killing. The Manson’s, the Boston Stranglers, the Zodiac and well you know the rest. This obscure killing machine became the basis of a new breed that spawned a number of cinematic creations based on this very idea.

The following chapters begin the long ride through the best of the deviants. We read into analyzed titles that range from “Cruising”, “Mr’ Frost”, Fear City”, Psycho”, “Silence of the Lambs”, “Liquid Dreams”, “Hideaway”, Henry – Portrait of a Serial Killer” to 100’s more.

Cettl has a great narrative style that is highly readable and easy to follow. He has done his share of homework and from it comes a firm undertaking of the styles, tastes and evil nature these films bring out in the cinematic form. It also serves as a great reference guide that fills the pages with summaries and breakdowns galore. A pretty good book and an even greater horror film library piece.

Mcfarland has put out alot of film coverage books, that deserve some serious sit down time. While this only one of many, I can say so far so good on all the editions I have seen.