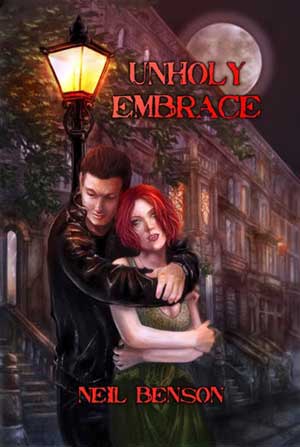 Unholy Embrace by Neil Benson is the story of a romantic and dangerous love affair between a beautiful, ages-old vampire and a mortal man. This story is enchanting and sexy with an edge of excitement. Not only do we read about vampires but of werewolves and demons. The New York night life and seedy underbelly do well to create a dangerous atmosphere. I enjoyed reading about the main character’s blossoming relationship but also the horrific demons and monsters that lurk about in the night. Nessa Harcanu is the sexy vampire born in 1597 in a small town near Budapest.

Though Nessa is voluptuous and sultry, she posses a power beyond mortal imagination. She becomes involved with a mortal man named Frank Thornton who is an attractive architect that is skeptical about the existence of vampires and demons. Also joining the story are members of the Meyer family of which Nessa becomes close with early on in her life as a vampire; they come to serve her and assist her with her needs throughout the ages. We also come across a weaker vampire named Narice whom, after her master is killed by Nessa, begins following Nessa waiting to exact her revenge. There are a few other characters we run across in the story who serve as a backdrop in the evolvement of the two main characters. The interaction with these other characters gives us insight to the character’s lives and personalities.

Nessa’s tale of how she became a vampire and her life up until present day is one of intrigue and even sadness. Frank listens to Nessa’s story and becomes even more enchanted with her and begins to understand her a little better. Their relationship is really one of master and subservient, Nessa the master and Frank the subservient. Even with the uneven balance of power the relationship between the two becomes stronger and the need to protect one another grows. The appearance of a demon creates more drama and trouble for the two and they realize in order to save humanity they must defeat this demon in any way possible.

I would classify this story as less horror and more romantic suspense but it is still a wonderful and exciting tale. As I delved deeper into the book I found it hard to put down. It is definitely an easy read and isn’t cluttered with unnecessary plot and lag time. There were times of some light eroticism mixed in with story to give it an edge above the teeny-bopper vampire love stories. Also we examine great power within Nessa making her almost super-heroine like in her conquests. Frank’s mind is torn between his deep love of Nessa and his wish for normalcy in his life. My only complaint as far as this novel was concerned was that I felt that the ending was a tad rushed; I felt that maybe the writer was a little unsure of how to resolve the conflict without creating more trouble for the characters.

Neil Benson has a rare talent for creating a story where you can identify and truly care about what happens to the characters. Giving life to character’s like Nessa and Frank enables the reader to walk in the footsteps of the characters, getting more in-depth in the story and almost being able to see the world through their eyes. I would also have to give Neil Benson props on creating a dueling perspective between the characters; by doing this we can see the story from the perspective of both Nessa and Frank. I would highly recommend this book to all vampire lovers out there and especially those who enjoy romantic flights of fancy.