When a series of bizarre and violent killings haunt a dark and decadent city, a corrupt cop, Sean Fallon (James Horan, Flags of Our Fathers), must face his own demons to put an end to the brutal string of rape-murders.

With the help of an unsavory band of pimps, headed by Chance (Lance Henrickson, AVP: Alien vs. Predator, Millenium, Aliens, The Terminator) – his only allies – Fallon tracks the mysterious assailant … who just may not be human! 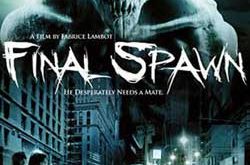