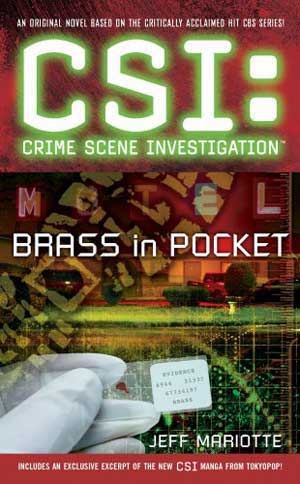 As you may or may have not known, the hit television series, CSI Crime Scene Investigation has become the basis for a series of novels. The latest being, Brass in Pocket (323 pages), by Jeff Mariotte. Now I do want to mention, this review is based on my personal opinion only, so please try to keep this in mind, as you read my review.

The story takes place over the course of a night where all members of the CSI team are dispatched to three different crime scenes. Gil Grissom, the supervisor of Las Vegas Crime Lab, is away for a symposium, so Catherine Willows is left in charge instead.

The first crime scene begins at a cheap, sleazy, dirty motel. The Rancho Center Motel, to be exact. This is where a private investigator is found shot, and the woman that was with him, missing. The next crime scene takes place at The Desert View Airport, a small non-commercial airport. Here a man who took a late night flight mysteriously dies in the plane where no one else was on it and the plane still has been landed successfully. The third crime scene starts at a casino that is under construction, which has also become a dumping ground for murdered animals.

At the Rancho Center Motel, Catherine Willows and Nick Stokes find evidence linking Captain Brass to the crime scene. Catherine tries not to suspect him, though all evidence and motive seems to be pointing towards him. Then, as if Miss Willows doesn’t have enough problems already, her daughter calls &…, I won’t spoil it for you, but you may have already guessed, personal drama, as always! Meanwhile, Nick Stokes, Greg Sander, Doc Robbins and Dave Hodges, whom are all working on the second and third crime scenes, bring their own investigational issues to the table, so Miss Willows now has a enough on her plate to last through a whole episode with, of course, the chance of them having no resolution. But of course, in the end, the team find the missing woman from the first crime scene, they figure out the mystery behind the dead pilot and rescue a woman from being murdered by the man dumping dead animals at the casino under construction..

Now all of this sounds great, but in reality, the book is a true disappointment. The concept is excellent, and the problems they face are very real, but the plot seems rather unfinished in my personal opinion. Not to say that others will disagree, but the plot lacked true substance for any true die-hard fan of the television series. It’s almost as if the author had felt rushed to write this book, as I also did find typos throughout! With that being said however, the author did do a tremendous job of explaining things that need not be elaborated upon and a so-so job of things that should have been thoroughly dissected. Even the dialogue, itself, seemed a bit unbalanced.

In conclusion, being the novel is based on the actual series, the book’s dialogue, characters, plot, etc…, should be presented the same way as the show. However, as I mentioned earlier, this is only a review which represents one’s personal opinion and many may not agree. I do think however, he needs to dive a bit more into each characters’ personalities, as he seems to have failed to capture much in this book. The bottom line, to the avid viewer of this show, the book would disappoint and bore to no end. I would not recommend this book to anyone who is as true of a fanatic of the series as I am.