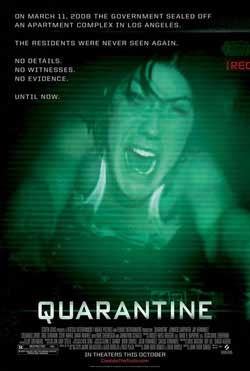 While on assignment, an L.A. news reporter (Jennifer Carpenter) and her cameraman (Steve Harris) find themselves trapped in a quarantined apartment complex along with a vicious unknown killer. With all forms of communications cut, the news crew keeps the cameras rolling as they search for a way out. The building is locked down, a killer is on the loose, and panic sets in as those trapped inside make a desperate attempt to escape with their lives.

Quarantine, you may have heard the great things about it, or maybe just its predecessor “REC”. Either or it stands as a great film with high scares throughout! In already reviewing the film REC, I can tell you that Quarantine is a carbon copy of the shots and story. The difference of course …american dialog and actors. Now off the baT, If I had to compare, I would say they were both very similar but REC had some camera shots that makes it still my fav of the 2. This is not to say that Quarantine doesn’t kick ass, but you might take the time to go watch both actually. The other subtle differences were the timing of some shots and the sound effects employed. Both again were similar, but I guess its just easier to say that REC had a one of a kind formula.

Now on to the story A very simple plot. Of course some of the best work is pretty simple as we know. A news team has been assigned to cover the day to day of the local fire department. As any news show, they walk around ask questions and film everything to edit the best stuff later. The movie look is combined filmic and SD to give it that news program feel. In fact after the first 10 minutes, you are wondering how this film can really gear up into real horror. All it takes is a routine emergency call for an apartment complex to start the engines. The camera team of course goes along for the ride hoping to catch some on camera action. They get more than they bargained for. The distress call comes in regarding an old lady who is sick upstairs. She has been making noises, so the fire team was called by the apartment residents to check her out.

She is obviously more than just sick as she proceeds to bite one of the firemen. This is how it all begins. The lady, the fireman, and then several others become infected from a viral outbreak. The viral outbreak has basically produced a maddened state, that also seems to inflict deterioration found in movie zombies. Foaming at the mouth, madness, violence, incohersion….you name it! Now without giving you shot for shot, you can guess that more and more become infected and more violence ensues. It doesn’t help that the hasmat team and several other agencies have quarantined the building not allowing anyone to leave.

All the while our news camera man is continually filming to document the goings on. In fact the whole film is only shot from his POV which gives the film its certain unnerving quality. This is case where this camera technique works to the film’s advantage. The ability to see only partials keeps the viewers in the dark as much as the actors on screen. This technique also provides a opportunity to scare the audience in special ways. Misdirection comes easier as your are only given one camera to see through. The intense moment may dizzy the audience a bit so prepare yourself. Makeup effects are provided with harrowing details, sound is composed with heavy dynamics to intensify the impact scenes.

You’ll recognize our award winning actress Jennifer Carpenter who gained major attention in the film The Exorcism of Emily Rose . She once again proves she has what it takes to summon up her frantic hyperventilating persona. She moves pretty instant from charming to freak out like no other.

You’ll also have the pleasure of enjoying the famous drag into he dark shot, which if you haven’t noticed by now has been derived into a collection of new films.

If your wondering if details of the film and the virus origin are revealed, they are, but you have to pay close attention. The film is highly effective as a modern horror film in a day and age where POV shots, handheld’s and other like trends have flooded the market. This film in many ways is the Blair Witch of last year. Or perhaps I should say REC was, but since its not available on DVD unless per import, Quarantine really is the introduction for US viewers. Very easily this film makes several top 10 lists for scariest film. If I were to advise, I’d say it might work more effectively in the theaters due to its engaging nature. Though if you missed that opportunity then go out and buy this. A moment of horror brilliance that will scare the hell out of you!