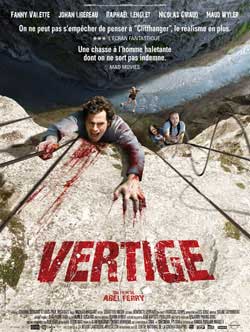 A group of young adults go on a trip to the Balkan Mountains hoping to have a nice relaxing time. At the urgings of Fred, the risk taker of the group, they decide to explore an area of the mountains that is closed off from the rest of the area. Unfortunately, they soon discover that they are not alone and they find themselves in a fight for survival against an insane mountain man who enjoys slaughtering anyone he comes in contact with. What was supposed to be a fun-filled outing soon becomes a nightmare for the group and none of them may make it off of the mountain alive.

REVIEW:
I have only seen a couple of French horror films (such as High Tension and Them) and I really liked both of them. I went into Vertige, a new horror film from France with high hopes and I am happy to report that I wasn’t let down in the very least. I thought that it ruled and think that anyone who is into slasher flicks like I am will enjoy it. I can’t think of a single thing I didn’t like about it and have a feeling that it is going to be one of those movies that I watch over and over again.

First off I’d like to comment on the plot. It may not be the most original (It reminded me of Just Before Dawn, The Hills Have Eyes, Wrong Turn, and even the lesser known Evil Breed: The Legend of Sam Hain) but I didn’t mind at all. I am a stickler for these types of movies and even though there was nothing really new about it I wasn’t bothered by the lack of originality (yes, I am aware of the fact that in the past I have bitched about other films not trying anything different, so you have every right to call me a hypocrite). Even though it has been done several times before I still enjoyed the premise and thought that it was pretty entertaining.

In addition to being treated to some breathtaking scenery (which made me want to take a trip to the mountains myself) we have an interesting story about a guy named Anton who is a demented mountain man who gets his kicks out of stalking and killing the people that are stupid enough to venture into his neck of the woods. He is a pretty nasty fellow and as a result there is quite a bit of gore involved once he gets to work. We have the pleasure of witnessing such gruesome things as a person getting his leg caught (and almost cut off) by a bear trap, someone falling into a trap full of spikes and being impaled through the arm, a few people being shot with arrows (with one unfortunate soul getting shot in the back of the head and having the tip of it come out of his mouth, and a scalp-tearing, bone-breaking smackdown that looks very painful to the person on the losing end. Needless to say the filmmakers didn’t shy away from blood and guts and the results are impressive. As a gore hound myself I can say that I didn’t walk away from Vertige feeling unfulfilled (and just wait until you see the cool decorations that Anton has hanging around his living area).

I liked all of the characters a lot, and I think the main reason was because they weren’t just the stereotypes (such as a slut, a jock, an asshole, etc) that you usually see in movies of this kind. Each character has his or her own distinct personality and as a result I found myself really wanting them to survive their ordeal (which is a rarity for me as I am usually cheering on the killer).

My favorite character was without a doubt Chloe (Fanny Valette). She is a strong character and it only took a few minutes for me to really start to like her a lot (of course it helped that she was easy on the eyes). She is far from being a helpless victim and can take care of herself (even if she does have her ex and current boyfriend vying for her affection and trying to protect her). She proves that she is not just fodder by actually attacking Anton at one point and getting into a bloody fistfight with him that could only be compared to a WWF hardcore match. She is one tough chick and despite a troubling issue from her past (which the filmmakers really don’t go into a great detail about) she is more than willing to do whatever it takes to stay alive.

Another thing that I really liked about the movie is the fact that there is never a dull moment. There is something going on from the very beginning until the end credit roll. I was not bored for a single minute and when it ended I found myself wishing it could have gone on just a little bit longer (something I haven’t done since I watched C.H.U.D. for the first time when I was just a young lad). If you are looking for an action packed horror flick with almost no lag time then this is the movie for you.

As you can tell, I was highly impressed by this movie and don’t understand why there are so many negative reviews for it on the Internet. It had everything I could ever want in a horror film and I didn’t see a thing wrong with it. It’s been a long time since I’ve enjoyed a slasher film this much and I would highly recommend it to anyone. I liked it so much I am even going to go as far as to say it is the best horror movie I have seen thus far this year. You don’t have to take my word for it though, check it out yourself and I am almost certain that you will agree. 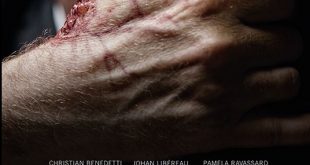