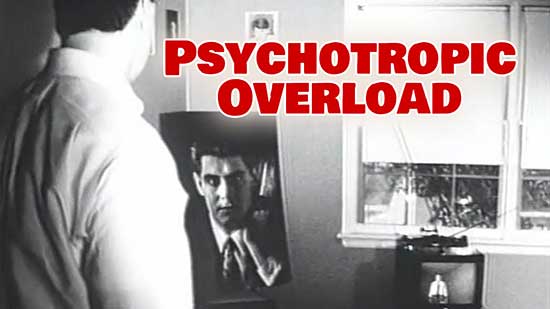 Psychotropic Overload, is a psychological horror/thriller, as one describes it, “Definitely check this one out if you’re into abstract cinema from the likes of Lynch, Jodorowsky, Buñuel or something along the lines of Elias Merhige’s Begotten.” Josh Samford- Rogue Cinema  It’s now free on Plex & going up on Prime Video soon:  watch.plex.tv/movie/psychotropic-overload
blog: thenightstalkintippytoe.blogspot.com/2017/10/the-devil-takes-holiday-meets.html
This film could easily be the next midnight movie sensation. It has similar qualities of Maniac, El Topo & Eraserhead but the campy humor of The Room.  Psychotropic Overload straddles the line between straight Horror, avant-garde, and narrative but could flourish in a Midnight movie venue. It’s been something of a hit on eBay in the VHS collector’s groups on FB. At bare minimum, it is absolutely like no horror film anyone’s seen recently…
Let now superstar film critic Matt Zoller Seitz (w/ books on Wes Anderson, Oliver Stone, and The Sopranos) tell ya all about it….
www.dallasobserver.com/film/rushes-6404696
imdb: www.imdb.com/title/tt0326622/?ref_=ra_sb_ln
web page: jfafilms.com/films_pychotropic_overload.html
Share