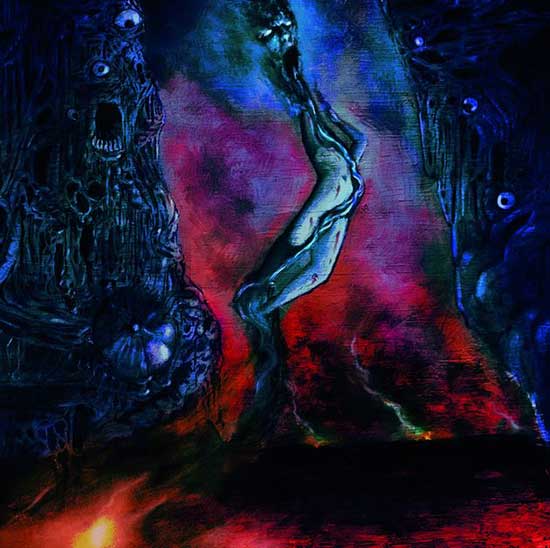 Burning Coffin Records and Dawnbreed Records have come together to unleash the purulent and soul draining opus “Eternal Gloom: A Void of Agony and Repugnancy” from Chilean Death Metal Miscreants PUTRID EVOCATION, this 2021 EP will be available on May 13th on compact disk and on wax in 2023.

In an ever-burgeoning Death Metal scene in the South American country which has spawned countless great acts like Innana, Torturer, Soulrot and more, PUTRID EVOCATION are a familiar name and “Eternal Gloom” is the fourpiece’s first release of new music after their 2014 full-length “Echoes of Death”. Seven years later and the world is in turmoil and PUTRID EVOCATION have returned devoid of light and full of pestilence to twist and turn the human psyche on this their posthumous recording.

In a change to the groups usual skull crushing Death Metal stylings “Eternal Gloom” presents the band in a significantly darker and more progressive light. The EP is sewn together utilizing clever bridges between tracks that ramp up the atmosphere and serve well in the listener losing themselves down a rabbit hole of expertly crafted Death Metal. PUTRID EVOCATION change tracks up introducing some mid-tempo almost touching Death/Doom stylings to the mix with subtle synths and loads of re-verb which adds to the whole feel of the record which is at points utterly oppressive. There is this real feeling of anguish and an introspection that tears you down to their level.

The fourpiece still manage to absolutely pulverise when they ramp up the pace spewing out a maelstrom of flesh tearing Death Metal with flailing riffs that will have you hooked from the first note you hear. Drummer “A.V.” produces a show stealing performance behind the kit… pure annihilation that, fair warning, your speakers may not survive. The overall performance is perfectly topped off by the vocal savagery from “B” and “R” which range from low groans to gritty howls and sound utterly haunting.

This impressive EP deserves far more attention, so get up, rub your eyes, go grab your wallet and head over to Burning Coffin (Chile/ ROW) or Dawnbreed (Europe) to pick this up!

1. Evokers of the Obscurity, Reveal the Course of True Death
2. Spreading the Impure Seed of Antichrist Ejaculation upon Your Dismal Skeleton (Interlude)
3. Faceless Shadows
4. Cryptical Rites of Rotting Flesh
5. Surrounded by Emaning Black Mist from the Depths of a Derelict Grave (Interlude)
6. Rising Spirit, Beyond the Corpse