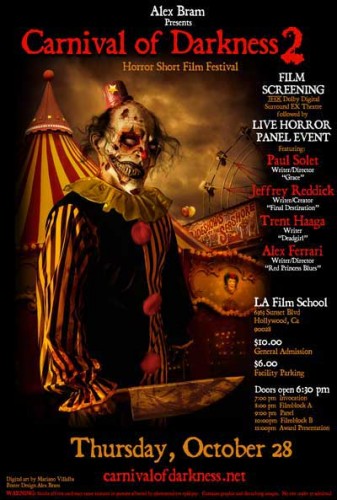 Filmmaker Alex Bram presents the most promising new voices in horror at the second annual Carnival of Darkness Film Festival.

The most haunting and disturbing horror short films from across the world will be presented on a THX Authorized, state-of-the-art screen at LA FilmSchool this October 28th.

This is more than just a screening of a bunch of films. It is a surreal experience. “Invocation” a LIVE electric cello performance by Tina Guo will kick things off at 7:30 pm. Arriving fans will travel through a twisted art gallery and lobby filled with horror collectibles, DVD’s, posters, music, t-shirts and comics relating to the genre.

The horror shorts film screening will begin at 8pm, followed by the filmmakers panel and awards ceremony. Most of the material is too intense for younger viewers and no one under 17 will be admitted.