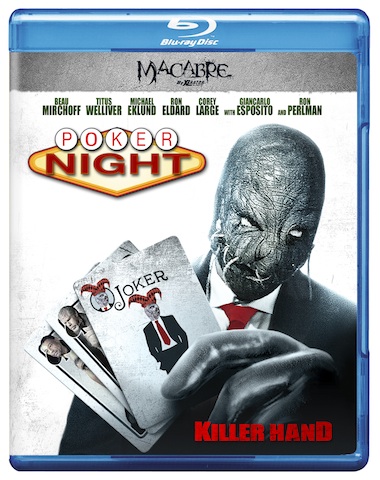 Stan Jeter is a rookie detective who gets invited to a game of poker with several veterans. They all share stories of different murder cases they’ve solved, which proves invaluable when Stan is captured and imprisoned by a vicious serial killer. Stan must use the stories from his poker night to survive the night.

Released as The Joker in the United Kingdom, this conventional horror doesn’t have a Batman in sight. The heroes are a group of ex-cops, who come together to imbue their wisdom on their young protégé Jeter, played by Beau Mirchoff. He attends a poker night referenced in the US title of the film, which goes on throughout the movie. The story is told in flashbacks, starting with a bloodied Jeter talking about events that have happened, which you’re about to witness. Each ‘lesson’ is shown within a flashback to the poker game and then within another flashback in which a grizzled veteran cop tells his story. They keep playing a hand of poker, predictably Texas Hold’em, the most common poker variant, and this overall predictable approach is pretty much par for the course over the film. Performances from the stellar cast, which includes Giancarlo Esposito (Breaking Bad), Titus Welliver (Bosch) and Ron Perlman (Hellboy), are unsurprisingly good and all pull off the weather-beaten cop routines with style. The dialogue isn’t always as sharp as you’d like, but the seasoned actors play the cards they are dealt, and do so well.

There are clever touches throughout the film; the antagonist tells his story through flashbacks, but he is only pictured wearing a leathery mask akin to Bane of Leatherface from the Texas Chainsaw Massacre, as that is the only way Jeter can picture him. It’s a neat touch, but the sequence still contains flashbacks within flashbacks. Around the poker table, they stick to one poker variant, and the writer might have been better sticking to one plotline. Instead, he tries to play several hands at once, and whilst it is smart for a moment, it does eventually get a little consuming. Think Memento and Pulp Fiction, but not quite as smart.

Whilst the layers do pile up and become a little confusing, that doesn’t detract from the fact this is a well-written film in places. The dialogue might be a little rough around the edges, but the pacing is good, and there are a few laughs in there, albeit fairly dark ones. The film has been discussed as a horror in some quarters, a thriller in others, whilst there are elements of dark comedy. You never quite know what is coming next; gore, action, a laugh, or another of those pesky flashbacks. A poker night is packed with unpredictability, and to a degree, the writer throws that lack of definite direction at us with no thought as to how we’ll handle it. If you are an adept poker player, used to rolling with the punches and dealing with the unexpected, you might like this film.

If you’re a little less poker and a little more solitaire, then there’s just a bit too much going on in Poker Night for you to deal with. Still, it is worth a watch, if only for that cast of gnarled cops sitting around a table throwing out a few hands of poker. We do admire Esposito, a versatile actor who will crossover to video gaming this Fall. Perhaps if there were ever a Poker Night sequel, it should just focus on Esposito, Perlman, Welliver and the other cops and their stories, leaving Jeter and his femme fatale to rot in the basement with Leatherface, or Bane, or whatever he is.

You can find a review of the other ‘Joker’ film, featuring Joaquin Phoenix, elsewhere on the site. Be warned; there’s less poker in it and far fewer flashbacks.