NEW FAMILY-FRIENDLY ANIMATED ADVENTURE
BASED ON THE NEW YORK TIMES BESTSELLER
JUST IN TIME FOR HALLOWEEN! 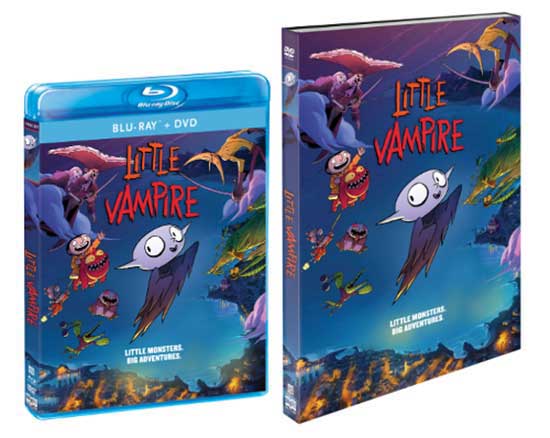 This fall, a cute little vampire and his endearing friends abound perfectly timed for Halloween! The new animated family feature LITTLE VAMPIRE is coming to North American digital entertainment platforms on September 21 and in a Blu-ray+DVD combo pack, as well as a standalone DVD from SHOUT! KIDS in collaboration with STUDIOCANAL on October 5, 2021. Available for the first time on North American home entertainment shelves, the DVD and Blu-ray contain both the English and French audio tracks with English subtitles. Pre-order for the physical releases is available now at ShoutFactory.com and other fine home entertainment retailers.
Directed by popular French cartoonist and filmmaker Joann Sfar (Little Vampire TV series, The Rabbi’s Cat), LITTLE VAMPIRE is the highly anticipated movie adaptation of Sfar’s popular graphic novels Petit Vampire and The New York Times Bestseller. A fantastical adventure story that celebrates the importance of friendship and family, this entertaining film was nominated for a César Award for Best Animated Feature and a Cristal Award at the Annecy International Animated Film Festival. LITTLE VAMPIRE will screen at this year’s Fantasia International Film Festival in August ahead of its home entertainment release.
Little Vampire has been 10 years old for the last 300 years. Despite living in a haunted house with a merry group of monsters, he is bored to death. His dream? Going to school to meet other kids. Unfortunately, his parents won’t let him leave the mansion, because they believe the outside world is way too dangerous! Accompanied by his trusted bulldog Phantomato, Little Vampire secretly sneaks out on a quest for new friends. He will soon meet a human boy, Michael, but their friendship will catch the attention of the terrifying Gibbus, an old enemy that has been chasing Little Vampire and his family for centuries …
Joann Sfar’s Magical Society and STUDIOCANAL Present LITTLE VAMPIRE
Directed by Joann Sfar
Screenplay by Sandrina Jardel and Joann Sfar
Based on the comic books Petit Vampire
Art Director: Antoine Delesvaux
Produced by Aton Soumache, Antoine Delesvaux, Thierry Pasquet, Rodolphe Buet, Cedric Pilot
With the voices of Camille Cottin, Alex Lutz, Jean-Paul Rouve, Louise Lacoste, Claire de la Rue du Can.
Share