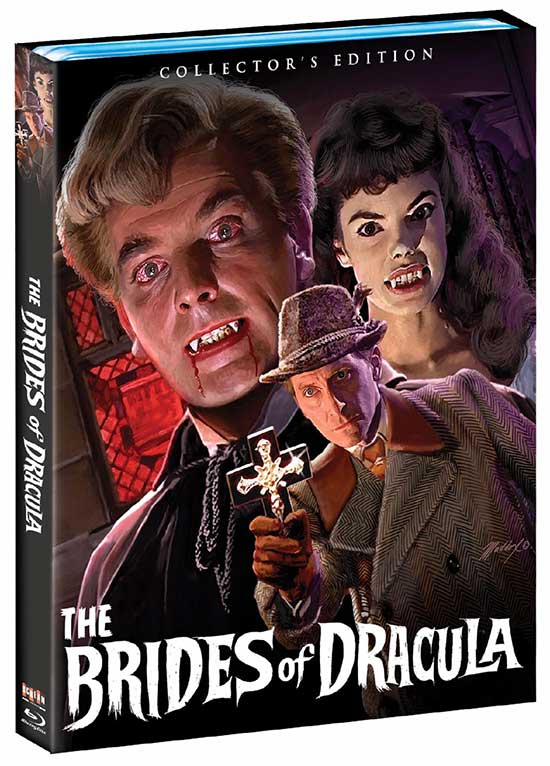 Avid fans and collectors, please take note: those who order THE BRIDES OF DRACULA Collector’s Edition from ShoutFactory.com and get an Exclusive 18” x 24” Rolled Poster featuring brand new artwork, available while supplies last!

Marianne (Yvonne Monlaur), a beautiful young girl, is stranded en route to a teaching assignment in Eastern Europe. She is persuaded to spend the night at the nearly deserted castle of the mysterious Baroness Meinster (Martita Hunt). In the castle, Marianne accidentally discovers a man chained to the wall in his room. The Baroness explains only that he is her “sick and feeble-minded” son. Unable to get any further information from her or the maid, Marianne steals a key and sets him free. But once unbound, the man – Baron Meinster (David Peel) – fiendishly recruits the undead for his evil purposes while Marianne and Dr. Van Helsing (Peter Cushing) try to stop him in this classic Hammer Film.

NEW 2K Scan from the Interpositive – in two aspect ratios 1.85:1 and 1.66:1
NEW Audio Commentary with author/film historian Steve Haberman and filmmaker/film historian Constantine Nasr
NEW The Men Who Made Hammer: Terence Fisher
NEW The Men Who Made Hammer: Jack Asher
NEW The Eternal and the Damned – Malcolm Williamson and The Brides of Dracula
The Making of Brides of Dracula– narrated by Edward De Souza plus interviews with Yvonne Monlaur, Jimmy Sangster, Hugh Harlow and more…
The Haunted History of Oakley Court
Theatrical Trailer
Radio Spot
Still Gallery

Tags THE BRIDES OF DRACULA