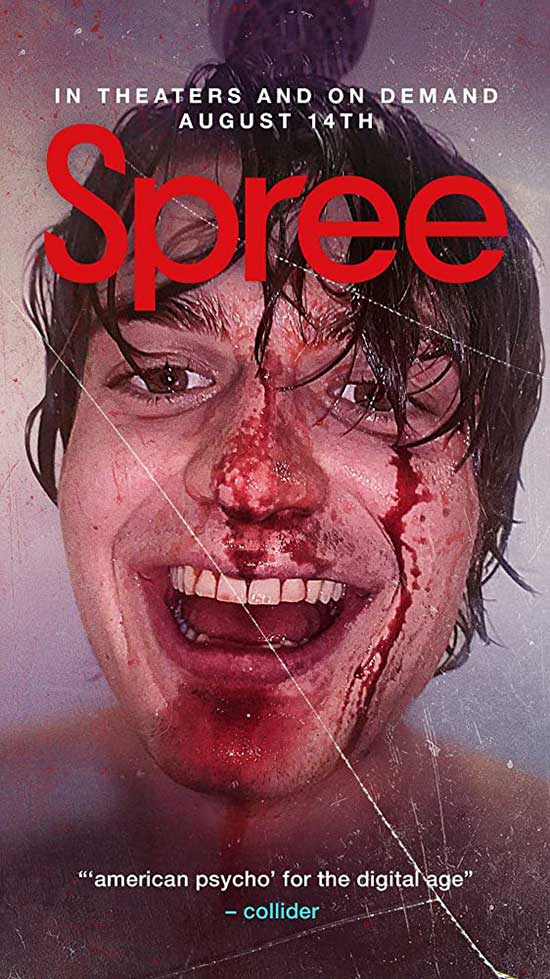 Thirsty for a following, Kurt Kunkle is a rideshare driver who has figured out a deadly plan to go viral.

There was a time when you didn’t get in cars in with strangers. Eugene Kotlyarenko wrote (along with Gene McHugh-writing) and directed Spree. Joe Keery is Kurt Kunkle and his dad, Kris Kunkle played perfectly by David Arquette. Kurt is on social media; he has a YouTube channel. He is drawing his life, talking about life, vaping. Spree is a clever film especially the way the world is now. Its different, “back in the day” unless you were hitchhiking out of necessity (You know, you run out of gas and there were dinosaurs and stuff roaming the earth. Okay, it wasn’t that long ago but sometimes it feels like it is.) Kurt even has a sign off for his videos. He starts talking about Spree. A new savvy APP for those that love APPS and technology, social media, selfies. 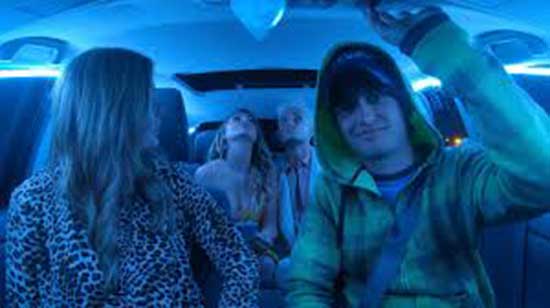 Its all fun and games until the social media influencer starts killing people. Kurt seems a little erratic and manic but I’m not a therapist. (I’m a writer, is it worse?) “Back in the day” people didn’t have all the platforms they have today. MySpace existed, (Where is Tom at? No one? No one remembers?) Social media is a funny place, it can be safe and fun or dangerous and dirty. Kurt starts picking people up now and he is using Spree. The first gentleman he picks up notices Kurt’s car is rigged with cameras. (“ABC, Always Be Chargin’” I almost fell on the floor)

Kurt is chatting, driving and being a social media influencer all at once. Kurt offers him water and he has a few bottles of water in the backseat. (Again, “back in the day” we didn’t take drinks from NO ONE! Some of us still don’t.) Kurt is giving lessons. #TheLesson Andrea (Jessalyn Gilsig) is a real estate agent with her cactus she is using to feng shui the houses. Kurt tells her about the cameras and well this will be her last ride. Kurt is legit giving a murder tutorial. He is calm and efficient.

Joe Keery does a good job with the character. Spree has a few social media influencers including Frankie Grande, Lala Kent. Kurt picks up Mario and Jessie Adams (Sasheer Zamata) who is a comic and Mario is enthused. Kurt wants to know about her following and how she got her following. Kurt is doing this for the “Likes.” It’s dark and Kurt has his car lit up so he can keep filming. London (Mischa Barton), Richard (Frankie Grande) and Kendra (Lala Kent) are looking for WTF moments for “the Gram.” Kurt takes them to a junk yard, his incredible spot. 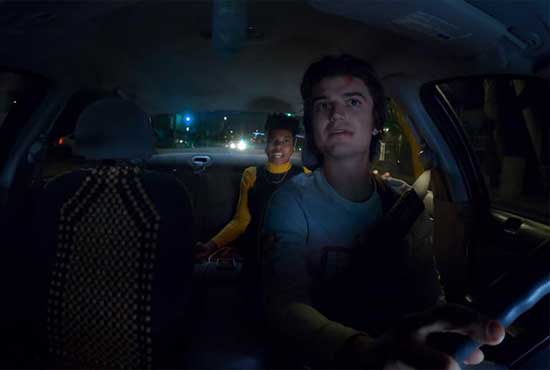 Bobby (Joshua Ovalle) is trying to help Kurt out with views. Kurt decides to go visit Bobby and Bobby doesn’t want to be a part of this. Kurt wants his following. Now we meet Miles (Kyle Mooney) is Jessie’s ride to her comedy show. After some homicide, some streaming, new followers, and his dad wants to take him to see a DJ. Kurt is sort of freaking out, he bails on his dad. Meanwhile, DJ uNo (Sunny Kim) … wants a ride and some food. She wants to pose in front of a food truck for her followers and Kurt wants her to tag him on social media.

The car shots and the wild car chase is unreal. The homeless scene is intense, there are so many homeless people and it’s sad that must be a reality. The fact that Kurt thinks they don’t exist because of “lack of social media.” The world seems insane. Kurt somehow made it through the madness and he’s at Jessie’s comedy show. Spree brings up so many real deal issues in the world. And, somehow people got meaner over the years. 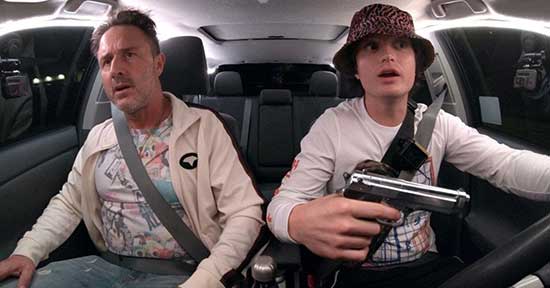 People will say the most horrible stuff online. “Jessie, why so serious? Where are the jokes? We’re living in it.” IF THAT IS NOT ACCURATE. Jesse vows to give up social media after feeling bad and sort of desperate and sad. Miles picks up the streaming now. In a world where some people do like to live through social media and “Likes” for some type of validation, this movie shows the good and the horrific of social media. It is scary too because some people so much on social media. When it is enough? How much is too much? Kurt gets into some more trouble. He winds up picking up Jessie again.

Validation should not have to come from everyone even though I am guilty of it and so are so many of us. We go on social media and think, hey this isn’t so bad. Jessie decides she has enough of Kurt’s nonsense. The serial killer documentaries make you wonder if the serial killers like Ted Bundy, Jeffrey Dahmer, John Wayne Gacy, Richard Ramirez and more. I am not sure how accurate this is but, “according to the FBI, there are up to 50 serial killers active in the United States at this moment.” 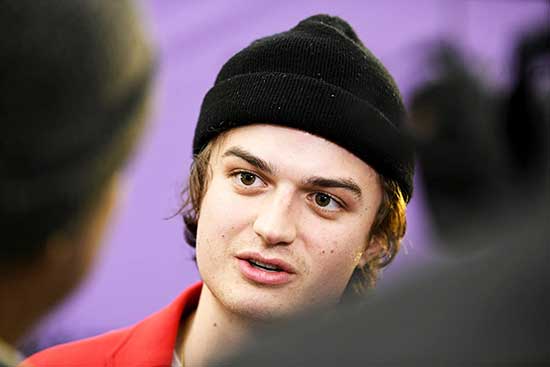 I think about all the weirdness going on and think, Lord now these people have access to social media. It really is scary, and Eugene Kotlyarenko does not sugar coat anything. He isn’t showing one side only. He shows the good, the bad, the horrific. The vanity side of social media and people doing everything they can “for the gram.” Movies like Hard Candy (2005), Trust (2010), Untraceable (2008). There are a lot of films with killing being posted online and people watching people. Peeping Tom, Psycho, Rear Window, Dressed to Kill (I picked Dressed to Kill because it’s one of those films that you just don’t know. The creepiness factor is intense.) One Hour Photo was beyond the creepy factor. 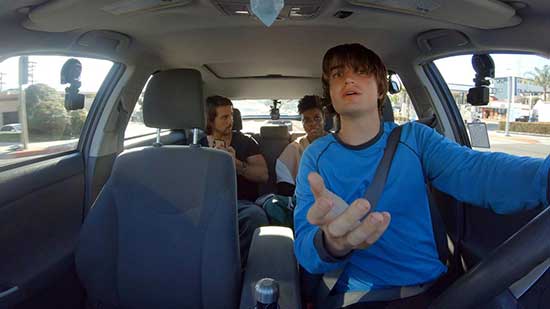 Sliver was another movie where watching went overboard and it wasn’t even with social media. Jessie gets in one hell of a predicament. Watch the movie to find out what happens. I recommend this movie. It’s entertaining and it makes you think. There are scary moments, comic timing and the actors do such a good job. Joe Keery and Sasheer Zamata and David Arquette take it to the next level. The followers, the likes, the retweets, the sharing. Is it worth it? Is losing yourself in a superficial world worth it? Social media can have such a powerful impact. It can provide information and spread powerful messages. Use it and have fun but be cautious and “don’t park next to vans” or drink water in a stranger’s car.

“May Your Nightmares Inspire You.”