For Fans Of: VNV NATION & COVENANT 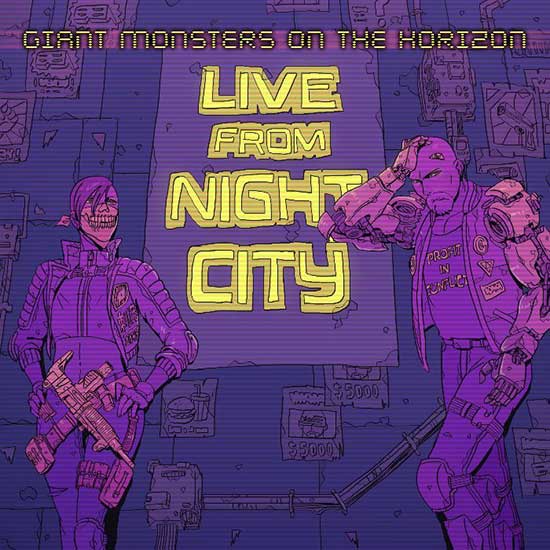 Social disparity, the need to connect on a greater than superficial level, tasting oblivion. We as a society seem to have merged with the mechanical as a form of statement, or as a need to find an added ability to get something we didn’t have access to before.

Is that, however, transcendence? That’s what we’d like to know. And these songs ponder such nature.

“When writing this album, we were dealing with isolation, depression, illness, and other struggles. You will see those themes and attempts to overcome them in a lot of the songs throughout. We tried to wrap it all up into a tight little package of stories you might see in fictitious Night City, which could represent any city really.” – GIANT MONSTERS ON THE HORIZON

For all of the technological advances we have made in the world, we are at a much worse place than we ever thought we would be. Welcome to Night City. So how did we get here?

GIANT MONSTERS ON THE HORIZON exemplifies all of the pitch-black goodness that makes the retro-futurist movement so interesting. Armed with shimmering synths, vocoders, and ambitions as robust as their beats, Vincent Saletto and Madison Olivia Davis create an amalgam of Wax Trax!-ish darkwave/Electro/EBM that pulsates and permeates the night.

The duo have worked or performed with the likes of Assemblage 23, Covenant, GosT, Dance with the Dead, Youth Code, I Ya Toyah, Cellmod, and Angelspit and count 6 major releases so far. New media projects, film scores, albums, and singles are always on the horizon.

Tags GIANT MONSTERS ON THE HORIZON