Scream Queen Danielle Harris was all smiles on Thursday, when she presented HATCHET II memorabilia to Planet Hollywood in Times Square, New York. Harris, best known for her role as “Jamie” in the Halloween films, playfully interacted with spectators and the media at the event, as she took her shot at swinging the hatchet to the delight of her cheering fans. After the donation, the actress presented a film retrospective with screenings of HALLOWEEN 4 and BLOOD NIGHT that also included sneak peek footage from HATCHET II. After the event, Harris will also make appearances at the midnight release of the film at AMC Empire 25 with a question and answer session to follow the film at the prime evening screening on Friday.

In the much-anticipated Dark Sky Films film, Harris takes on the role of “Marybeth” a woman with a vendetta who, in the first film, narrowly escaped the murderous clutches of the vile Victor Crowley, played by Kane Hodder. Together with a ramshackle crew of hunters gathered by Rev. Zombie, played by Tony Todd of Candyman fame, she descends into the bayou to avenge the deaths of her father and brother and engages in a brutal brawl with the hatchet wielding Crowley that not even the MPAA could control.

HATCHET II is a landmark film, because it will be released without an MPAA rating in AMC theaters across the country, marking it the widest release of an unrated genre film in more than 25 years, and buttons were distributed at the event calling for the support of unrated horror in dripping red letters. Even Danielle Harris has had some of her scenes left on the cutting room floor because of the MPAA. I Halloween 5, released in 1989, her character received a stab wound to the leg and a spurt of blood coated the camera lens but the shot was cut from the film as the MPAA deemed it “too disturbing” for audiences. If HATCHET II is a success it may help to spark new life into the often stagnant genre and give it that vital burst of fresh, new blood that it has been sorely missing for the past 25 years. 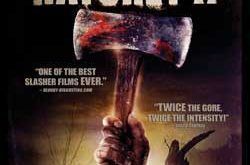 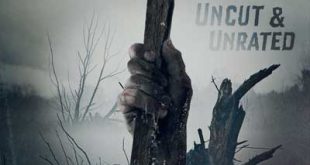