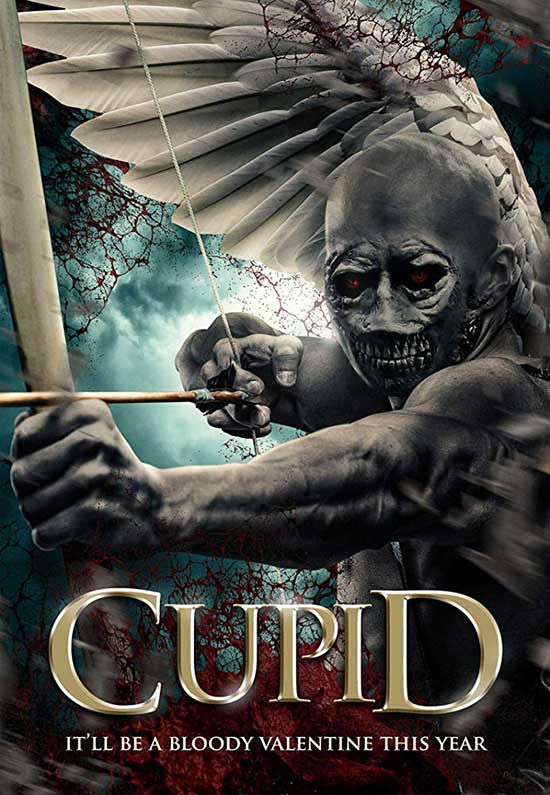 After being horrendously embarrassed by the mean girls at school, Faye, a practicing witch, summons the evil Cupid to take revenge on all those who wronged her.

As if Valentine’s Day doesn’t suck enough, Uncork’d Entertainment rolls out “Cupid” for those who have soured on the romantic view of the love.

According to the film’s first prologue (yes, there are two), the story of Cupid and Psyche did not have a happy ending. After Psyche dies due to the actions of Cupid’s mother, Venus, Cupid goes dark and pledges to punish those who betray Love and uses Death as his booking manager.

The second prologue introduces us to an obnoxious Lothario who is boring and offending his pretty but self-centered date in a restaurant. (Sensing a trend yet?) When the lady excuses herself to the restroom, the man’s frantic daughter appears to warn her father that she summoned a demon, Cupid, because of how he had treated her mom during the break up.

Dragging his daughter outside for more details, he bumps into his date who was scurrying across the parking lot to escape having dinner with the jerk. An arrow hits the date in the eye, and Cupid is now upon the man and his daughter. They don’t last long.

We meet Faye, our main character, as she attempts a love spell aimed at her sexy English teacher, Duncan. She convinces herself that it did not work, but that’s okay as she has her hands full with Elise, the sadistic high-school hot girl who has been tormenting and bullying her.

Elise orchestrates a savage plan that deals a triple-blow of humiliation to Faye. Being the not-so-smart magic user, Faye calls upon Death to request all Love be destroyed for everyone in the school. Dutifully, Cupid appears on Valentine’s Day and proceeds to stalk and slaughter all the characters the film has introduced up to this point.

“Cupid” has a different spin with transforming the titular character into a heartless killer who slays those who make a mockery of love. Given the reworking of the Greek/Roman legends, the film gives an appropriately dark origin for a character historically known as a smiling cherub and turns that image into rotting cadaver who only wishes to share the pain that betrayed love has brought to his existence. Much like the title creature kills love, “Cupid” kills any hint of creativity beyond the origin tale.

Faye is bullied by Elise. Yup. Elise is a horrible human. Nothing new there. Doting best friend in love with oblivious main character? Check. Caring but ineffectual adults? Got ‘em. Cannon-fodder minions for the mean girl? Only two because of budget.

Faye shows she is an entitled, self-centered person from her first scene, so she is no moral center for the film. Elise seems to exist only to push Faye’s buttons enough that she calls Cupid to kill love. The love-addled best friend is weak and whiny and appears to only be in the film for a semi-graphic gore scene. The two teachers and the principal seem too distracted to give any focus to the obvious trouble brewing around the school. The minions can scream and give Elise targets for exposition-heavy banter. Not a single person to care about.

The only attempt at depth comes from the revelation that Elise’s dad left her family to bang Faye’s widowed mom. Elise is actually the wronged person? That twist could have improved the plot, but the audience is informed of this in a throwaway scene too far into the film for it to matter.

If the thin characters and formulaic presentation of a tale nearly as old as Humanity is not repellant enough, the actors do their best to shoot the one mangled foot the film is hopping on. With only a couple of exceptions, the cast struggle with a generic “American” accent which adds to the consistently bland and/or stiff performances on display. Sarah T. Cohen as Elise is the only standout performer, and she is hindered by the already-noted thin script.

The best scene to sum up all the acting/writing ills of “Cupid” as well as displaying the non-existent chemistry between actors would be Duncan and Helen’s date. No direct interaction to the point that it appears that each actor was filmed independent of the other. Understandably, the film is most likely a single-camera production, but the actors exhibit body language alien to what the other person is doing, making the scene miserable, confusing, and unintentionally funny.

“Cupid” is lousy with issues as a single production, but the slapped-together quality of this film seems to speak to the production company behind it. A quick check on IMDb shows the same director/writer/producer as well as a good number of the same cast and crew have been and will be churning out similar films with Scott Jeffrey at the helm in role or another.

Instead of showing an iconic character go ballistic on love-sick teens, writer/director/producer Scott Jeffrey presents us with wafer-thin clichés called characters, slaps together a tale that will sound tired even to folks new to horror movies, and figures using colored lighting will distract the audience from realizing the direction is as lifeless as the script.