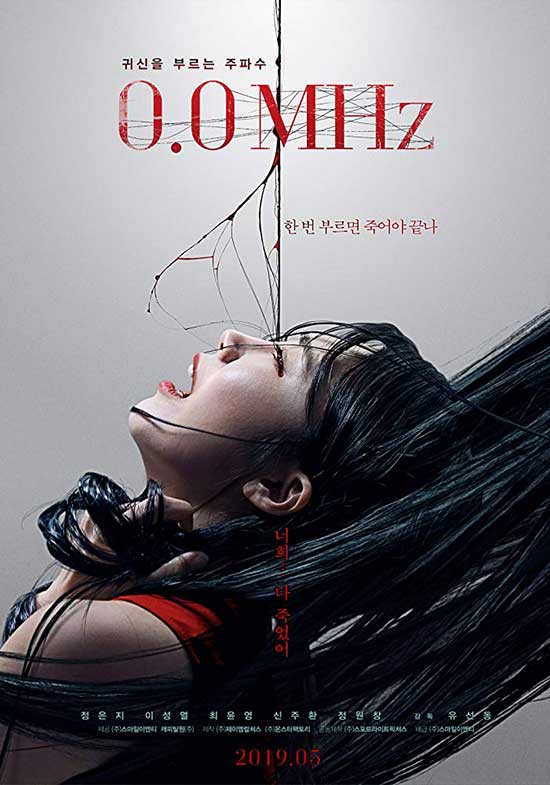 Members of a supernatural exploration club go into a haunted house.

At first glance, 0.0MHz seems like it could have some potential. While the idea of a paranormal investigation team (or, in this case, a club) going to a famously haunted location to try to find proof of the supernatural is certainly not innovative in any way, shape or form, I have watched enough films with a similar premise to know that sometimes even clichéd basis can deliver a decent outcome (good example being the 2018 Korean found footage romp Gonjiam: Haunted Asylum). Especially when you throw in some pseudo-science about contacting spirits through a certain frequency of human brainwaves, you might just have a nice little sci-fi-horror genre mix in your hands. Unfortunately, this is not the case with 0.0MHz.

The origins of the film are in the world of comics, having been adapted from Jang Jak’s eponymous webcomic. While Jak’s work has gathered a solid fanbase due to its graphic and genuinely creepy imagery, it’s hard to see the same happening with this cinematic adaptation. The tension needed to keep the viewer interested is just not there and any efforts to try and scare the audience fall flat from the get-go. Some of this is due to the rather poor-quality special effects, making the ghostly apparition and her wandering black hair (seriously, that hair just gets everywhere) more comical than scary. You could almost forgive the long CGI hair as it drags people off into crawl spaces and other uncomfortable locations.

There is even something quite unnerving about a body being dragged into a hole in the wall that should not by any earthly standards accommodate an adult human. You can imagine the person being forced through that stony tunnel being crushed and disjointed in the most gruesome ways. Pretty horrific if you ask me. But, as I stated before, 0.0MHz does NOT deliver in the scare department and so, even this one bit of potential terror is ruined by the filmmakers decision of making the victim of this ghostly attack survive the ordeal miraculously unharmed (well, she does get possessed, but still).

Where the special effects go completely and conclusively south, is when they decide to show the ghost in all it’s not so gory glory. Not only are the effects terrible but the camera lingers on them for way too long, making the poor quality even more apparent. This is particularly disappointing as we are shown a drawing of the said ghost at the very beginning of the film, and that drawing ladies and gentlemen is genuinely frightening. In fact, I would go as far as saying it’s the scariest part of the whole damn film, making the subsequent CGI monstrosity even more of a let-down.

Acting is pretty awful throughout, but the singer Jung Eun-ji and her particular lack of talent deserves a special mention. Keeping in mind Jung is supposedly a key character in all of this, being the only one of the ghost club who is actually able to see spirits, it is amazing how little energy she brings to the table. It is honestly like watching someone sleepwalk through their performance. There is no emotion, no enthusiasm of any kind, making you wonder whether she herself is a ghost (spoiler alert; she’s not). Whether 0.0MHz was a career move that Jung herself chose, I do not know, but for the sake of her career, I hope that rather than being some sort of passion project, this diversion was perhaps a brainchild of a clueless management team and after seeing the end result, they will let Jung stick to her day job in the future.

Needless to say, no, I do not recommend this god-awful mess to anyone. If you wish to watch a film about ghost hunters, there’s plenty of other films to choose from. 0.0MHz is not even worthy of a mention in that same context.