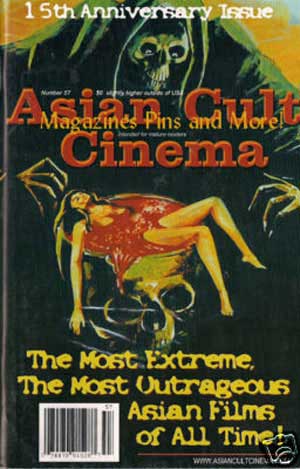 It’s probably fitting that my first issue to review from “Asian Cult Cinema” Magazine is an extra special one. Being a huge lover of Asian Horror films and never really getting all the time I need to watch them all, I’m always on the prowl for a new fantastic flick. Whether it be wet girl ghost films, over the top the gore and chaos, or just a great story movies I just cant seem to get my fill. Just when I’ve had a run and begin to think that 5 similar based ghost stories are getting stale, I come across a health of imaginative Asian films that I never heard of. Such issues like these help me to meet that goal and ongoing quest. #57 happens to be their 15th Anniversary issue boasting on the cover “The most Extreme Outrageous Asian films of all time!”.

Hot damn, now they are speaking my language. Not only does it provide that, but does so in spades. In fact if I’d known about this issue when it first came out, I surely would have run to the local book store to rape the magazine section for one.

As we begin they don’t waste any time getting into to it. The titles, the synopsis and a few pics to wet our appetite are all laid out like a crazy journey into another void. Holy mother of all things sickening, I think I’ve found a potential new bible for titles to indulge in!

One of the things you’ll find when reading several of the Asian film books on the market is you have to read “alot” to get to “these” kind of films. Sure you hear about the famed Guinea pigs films and a few common titles, but never really any mention of these CAT 3 insane movies. If you do, you do so and sometimes don’t realize that maybe you passed by a few great titles.

With films like Tokyo Gore Police being my ultimate favorite kind of Asian films, I was glad to read about a whole lot of similar type films. Rocks that bleed, penis curses that leave a man handicapped with a extra long shlong. tit popping goodness and “all” kinds of crazy wasy to dismember, behead and twist the gamut of the genre into new realms. Yep this is the reason magazines like this exist. To educate, translate and smack us in the face with fresh titles (older and new) that we have not had the pleasure of sifting thru to get to the goodies. Take for instance titles like “Wolf Devil Woman”, Magic of Spell”, Blue Jean Monster and Lolita vibrator Torture”..talk about checking out something different! Those who yearn for original cinematics I’m guessing will be giddy in excess on these noted titles.

Yep this issue is all about the best hardcore and extreme. Each page provides a quick overview of the best or recommended (or not for that matter). Not only that but it appears that the magazine ran request for folks to send in their top lists as well. So through out the mag we get some smaller edition lists usually limited to 3 choices. The issues ends of course with a readers poll of the what they are calling “guilty pleasures”. Not a bad list at that, though a few choices wouldn’t have made my list. But here is the thing, I’m still sticking with the list that Asian Cult cinema provides as my arae to focus on.

However the problem lies that many of these films are obscure, hard to find and some almost impossible to find..which leads me to believe that the readers choices are only limited to what they can obtain. A film like “Lewd Lizard” which is noted as being highly bizarre and over top is hard to find even as a bootleg. So it’s possible that several titles may take years to experience. For now though, I’ve got a list provided by the mag in itself and thats gonna be my guide as I seek these out.

Needless to say, fantastic and very essential for lovers of this genre! 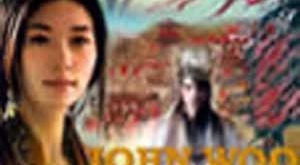 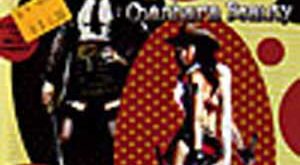 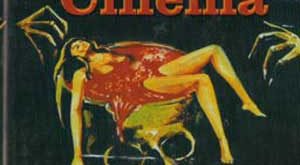