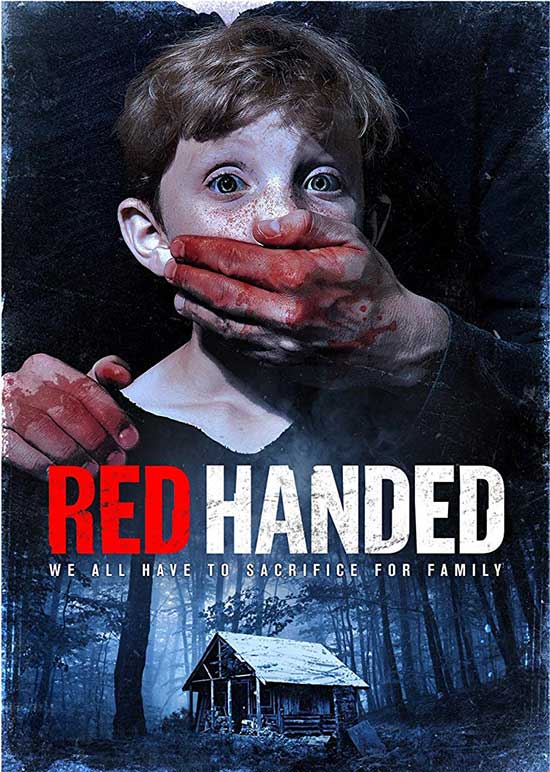 When their father is murdered, three brothers descend upon an Oregon mountain river to spread his ashes. After they arrive, one of their children goes missing. One of the brothers was himself abducted 30 years ago when they visited this same river, but he has blocked the incident out of his mind. Only by unlocking the mysteries inside his subconscious, will they be able find the child.

After the death of their father, three estranged brothers in rural Oregon are about to find themselves suddenly entangled in a dark mystery which will push them to the limits of their sanity and perhaps beyond.

Red Handed is a 2019 movie from Frank Peluso. It marks his debut as a writer/di-rector, although he has appeared on screen previously in minor roles in the Bruce Willis-starring Alpha Dog, and My Sister’s Keeper with Cameron Diaz. A common thread between these movies and Red Handed is Nick Cassavetes, son of legendary actor John Cassavetes; he directed and wrote or co-wrote the previous two and produced Red Handed. 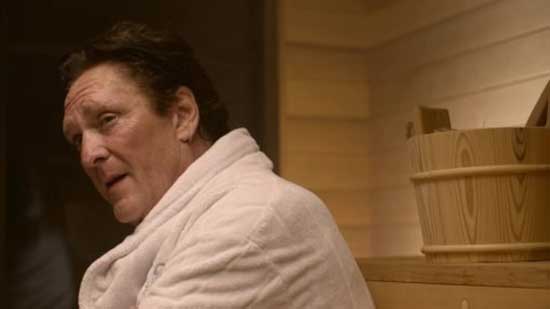 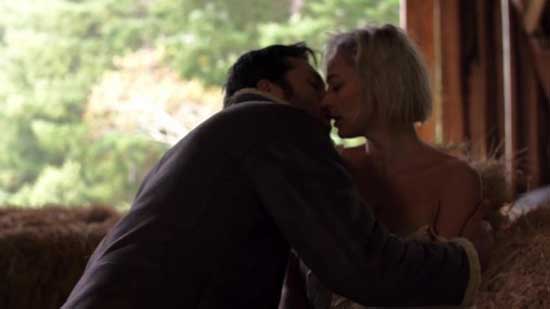 The movie sets out its vaguely demonic stall with some text informing us of the ancient Canaanites of 1270 BC, and their devotion to the demon God Moloch to whom they habitually offered their first-born children to ensure a good harvest season; most of these poor souls were sacrificed in Moloch’s name in a lake of fire. Some however, were selected to remain alive – those would be forced to drink from his chalice and then marked with the mysterious “fang of the serpent”.

With this out of the way we move immediately to the Sazarac River Valley in pre-sent day Oregon; and are treated to a voiceover from Michael Madsen as Lou, informing us that it has been thirty years since he last visited the Sazarac River and spoken to his brother Reynolds after an unexplained incident. We then meet Lou in his auto repair shop, along with his son Duffy (Michael’s real life son Christian Madsen) and grandson Louie; it’s clear from the awkward conversation Lou and Duffy are having that we are looking at a badly fractured family. 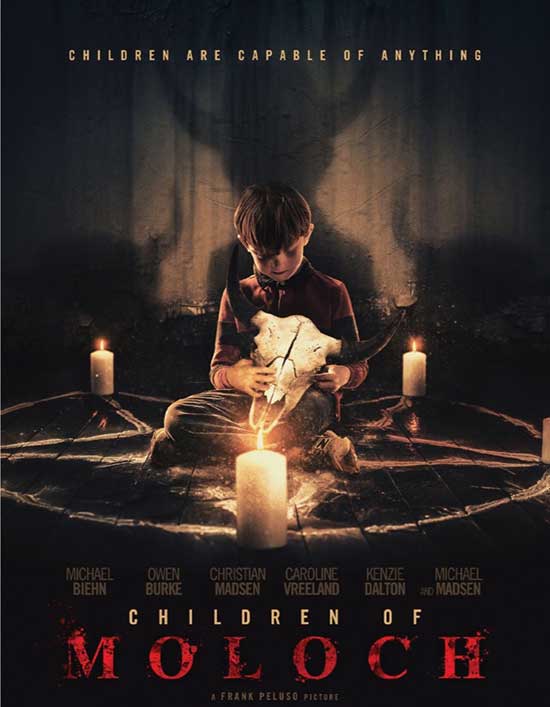 Immediately after his son and grandson leave, a Bentley-driving woman rolls into the shop, struggling to contain her assets in a barely-there cat suit and complaining of engine trouble. Thirty seconds of outrageous flirting later and Lou has volunteered to take the car for a test drive, before we cut to their arrival at the mystery woman’s house. It soon transpires that Lou isn’t as lucky as he thought when the offer of a shared sauna takes a dark turn – and her final taunts to a dying Lou make it clear that she knows all about his family….

We next meet Duffy at his father’s funeral, along with his brother Gus (Gus’ girl-friend Emma and Duffy’s wife Laurel appear to despise each other as much as the brothers do). The group call on the third and final brother Pete, where they arrange to scatter their father’s ashes back at the river. It’s clear from the interactions between the group that there is no love lost between any of them. Once they’ve settled in to the beautiful lakeside lodge their uncle Reynolds has kindly arranged for them to stay in while they’re visiting, the group soon meets some of the somewhat sinister locals – one of them we recognise as the late Lou’s sauna partner – and it isn’t long before young Louie has been sent off to make some new friends with their offspring. Before long the group start to notice some odd goings on, including strange occult-like symbols and inscriptions carved into the furniture at the lodge. 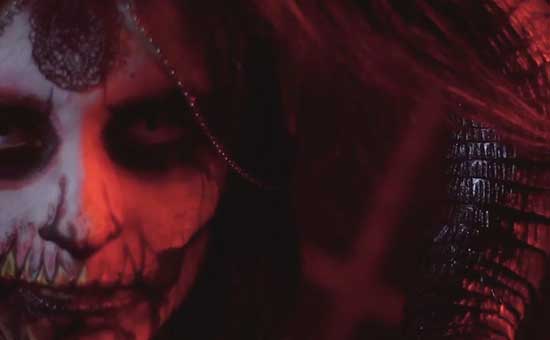 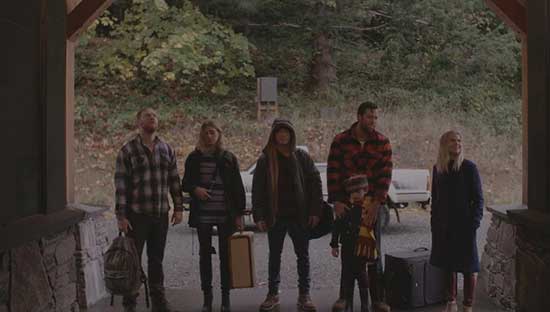 Things quickly start to spiral out of control once we meet genuine Hollywood legend Michael Biehn as Uncle Reynolds; little Louie disappears and the brothers soon start to turn on each other, especially when Gus and Duffy notice a mysterious fang-like symbol apparently carved on Pete’s shoulder – does he know more about the missing child than he’s letting on? A tense chase follows, during which horrific long-buried secrets will bubble to the surface and threaten to tear this dysfunctional family apart forever.

One thing Red Handed gets right is its cinematography; the camerawork is stunning, and the beauty of the rugged Oregon landscape is skilfully put on brooding display. A dark but unobtrusive score also helps to establish a bleak, sombre mood. Unfortunately though there are a number of problems with the movie; the acting varies between decent and amateurish, and while it does boast two major stars in Michaels Biehn and Madsen, it has to be said that both of their roles are little more than cameos (Madsen in particular barely makes it past the first ten minutes) and neither of them seem to be doing more than slumming it for the paycheque. 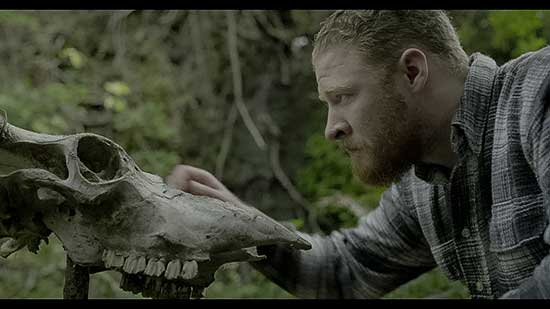 On top of this there are a fair few plot points and holes that are difficult to explain away (not least Duffy letting his six-year-old son go off to play with the local sinister hillbilly children within five minutes of meeting them), and characters at times disappear randomly without explanation – although some apparently choppy editing doesn’t help with this. Unfortunately the film is just not particularly tense or frightening at any time; it doesn’t seem able to pin down the genre it wants to belong to, whether occult horror, race-against-time thriller or dark family drama. It dips in and out of all of these but doesn’t really hit home as any of them.

It’s a shame as this is a very good-looking, moody film with a solid atmosphere and there is clearly a lot of talent involved; sadly, thanks to a lack of general direction the overall result falls a little short and it’s unlikely you’ll remember this as Michael Biehn’s finest work.