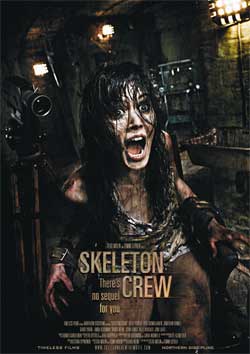 In the early 1970’s, a remote mental institution next to the Russian border was shut down by the police. Before it was closed, Dr. Andersson made a series of snuff films using his patients. The doctor filmed all the murders in 8mm, and started to call himself ‘The Auteur.’ Thirty years later, an American film crew arrives in Finland to shoot a horror movie about the massacre, and are unaware that they are about to become the stars of their director’s real life snuff film. Instead of making a horror film, they are in one. The Auteur is slaying the Skeleton Crew one by one…

Skeleton Crew was a surprise on many levels. Although it was intended that way it’s still a fun way to pull the wool over the eyes of audiences who start to get too comfortable in the plot layout. A dark rainy night, an accident and a couple …. Pete and Lisa leave the scene to find help. In there discovery they come across a hospital nearby. This hospital though is a mental ward who greets them kindly and offers to help and put them up for the night. I can name a half dozen films that begin this way, if not a stretch naming Rocky Horror, though we agreed to take the ride so we get comfortable with the direction its going. A rather creepy Dr Anderson, a nurse and an staffer or 2 run things at night. Lisa doesn’t waste any time finding the wrong areas to be in to stir things up.

Just as we are preparing for a typical Doctor chase patient scenario, we are cut to a live movie set where everything is in fact a film in progress. This may be a surprise, though it isn’t the only surprise. To go too much into detail on that aspect would ruin the flow. So I can tell you that the actors and crew now take on different roles as they work on a film they are calling “Silent Creek”. In fact many films and clique moments are discussed in there process to provide a real time present day humor to the mix. The area seems to be an old run down location that they decided was perfect for the film. The are somewhere in Finland which is also apparent from the accents of crew members. This film within a film has a purpose. That purpose is the finding of some old torture tapes that not only influence the director but transform him in his obsession. Call it a possession of sorts .

The found tapes condense some of the most brutal moments on screen into old jittery film showings that reveal the former occupants frequency to film and perform snuff films while brutally abusing there patients. Nailing into hands, burning them alive, busting kneecaps, ……..and much more for the sole pleasure of film capture. We also get the thrill of seeing every one of these found tapes as we experience them from the eyes of the on screen director. Sure we know that’s a rubber hammer they are using, but it still is hard to watch.

Needless to say, the building has a few old demons and ghosts lurking around that don’t take long to influence a mess of chaos and murder situations. This interplay of styles creates almost a hodgepodge of film influences into one piece. In fact as soon as you start making comparisons to “Hostel” on screen, the filmmakers mention it in passing that there film will be like Hostel but better….. See, they beat you to the punch before you could claim clever statements to your friends.

The film was directed by the teams of Tommi Lepola and Tero Molin who while show little background in directing provide the goods that horror fans are looking for. Paying more close attention you’ll find a confidence in editing, cinematography and tension points. The acting talent is almost comprised of newbies across the board, though what’s more important is that they seem to make it all work regardless.

In summary I found myself sort of time warping between 80’s, 90’s and 21st century feels through out. The clever aspect remains in the play on reality scripting itself in the ways movies such as “New Nightmare” and Midnight Movie” did in there storylines. We are also accompanied by the dark humor of “Scream” as it basically mocks itself along the way. Skeleton Crew is a great tribute to modern day horror films by emulating the very genre it creates. Skeleton Crew is also startling vicious. Where does it all lead? SC morphs into stark reality of horror film making that mirrors itself into a cycle of hide and go seek stylized murders.