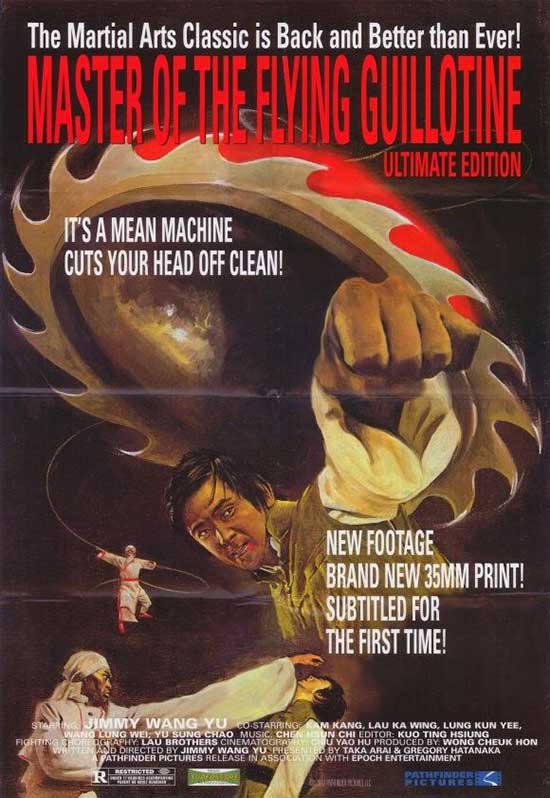 After his students are killed by the One Armed Boxer, a vengeful and blind Kung Fu expert travels to a village where a martial arts contest is being held and vows to behead every one armed man he comes across.

Master of the Flying Guillotine, which is a sequel to the One Armed Boxer, takes place in a few hundred years ago in China. The Ching dynasty had sent out highly trained assassins to kill those who had dissented from the rule of the current empire. One of them was a blind psychopath who was a master of using this funky looking bladed hat on a chain that can be used to easily decapitate people. He had sent two of his students to murder some dissenters, only to get a message that they were killed by a one-armed boxer.

The old man is pretty upset by this, apparently taking offense that someone would dare defend themselves instead of letting his students just murder him. I mean, what kind of jerk actually refuses to get killed, amirite? Anyways, the old blind guy starts beheading every one armed fighter he finds using his special weapon until he finally tracks down his true target. However, his prey is more than ready to face the dangerous assassin.

My own experience with a lot of Kung Fu films from the 1970s is that their story tends to be the weaker point of the movie. They’re normally there just to give a reason for a bunch of guys to kick the crap out of each. Now, this isn’t necessarily a bad thing since most of the time the main reason why we’re watching these movies is to be wowed at the displays of martial arts displays in expertly choreographed fights. With that said, there was still a story in those flicks.

The makers of Master of the Flying Guillotine, however, seems to completely forget that there’s even supposed to be one. The beginning establishes that the bad guy wants revenge and also gives us a scene or two to introduce the main character. Then the middle part of the film is dedicated to showing us different fighters participating in a tournament, with the event barely connected to the main plot. It has a tenuous connection to the oncoming battle between the blind psychopath and heroic one armed fighter at best. It almost feels like they just started filming fight scenes randomly until they went “Oh crap! We forgot about the plot!”,

One of the complaints I would normally have would be the movie’s tendency to go from dubbed English to Chinese without subtitles back to dubbed English in the middle of a scene. However, since there really wasn’t much of a story to begin with, this was more of a minor nuisance since it didn’t feel like anything anyone was saying was all that important.

With so little time actually devoted to the plot, not much time is devoted to character development either. Not much camera time is devoted to the villain of this film, and we’re not given much insight into who he is beyond he’s the bad guy. Our hero, the one-armed fighter, is in the movie even less. He barely shows up at the beginning, not showing up at all during the middle, and only getting to factor into the film during the last act. We barely get to know or connect with the hero we’re supposed to root for. While I understand that this is a sequel, it still should have devoted more time to the hero so those of us that haven’t seen the original film will actually care about what happens to him.

With there’s some good to be found in this flick. Whenever the blind beheading assassin shows up, the music takes on a guttural sound. Not only did it sound really cool, it was this great ominous sounding music that added gravity to his scenes. I was impressed by how well the music helped provide a sense of tension whenever the old guy was on screen. It already makes you take him seriously before you even see him start murdering people. 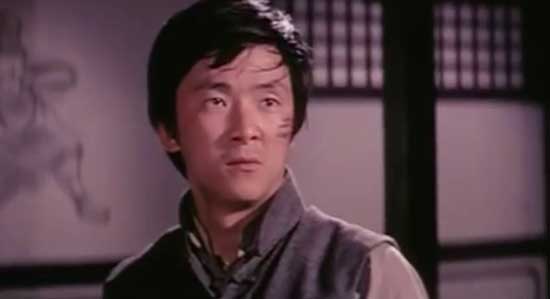 A kung-fu movie is only as good as its fight scenes since that’s usually the only reason people are watching. I know that I’m not watching them for some message about the human condition. I just want to watch folks beating the crap out of each other, and in that respect, Master of the Flying Guillotine did not disappoint. Every fight scene was exciting and well choreographed, and each scene always seemed to up the ante. While some of the action will require a lot of suspension of disbelief because the some of the physical feats are impossible, you won’t grow bored. The last act of the film, when our hero FINALLY does something, is also when the flick is at its best. The one-armed boxer uses his wits and surroundings in clever ways to defeat the assassin and the other fighters that accompany the old coot on his journey. The assassin’s special weapon was also one of the more unique objects I’ve seen employed in battle, and definitely made for an interesting visual whenever he used it. 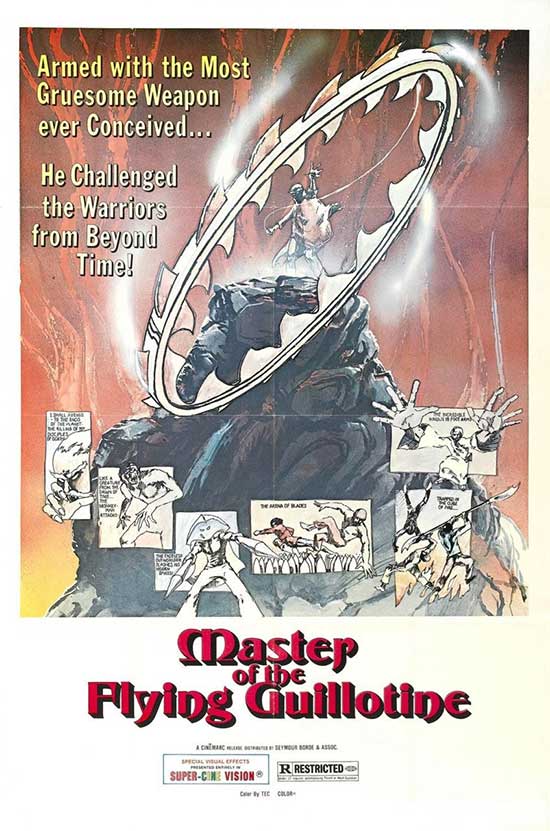 Master of the Flying Guillotine is not a great movie by any means. Its story is so underdeveloped that it’s practically nonexistent, and you’re not given much a reason to care about the main character. However, what the film lacks in other areas it more than makes up for in some truly creative and fun fight scenes. I definitely think this is worth giving a watch when you’re in the mood for some mindless fun.