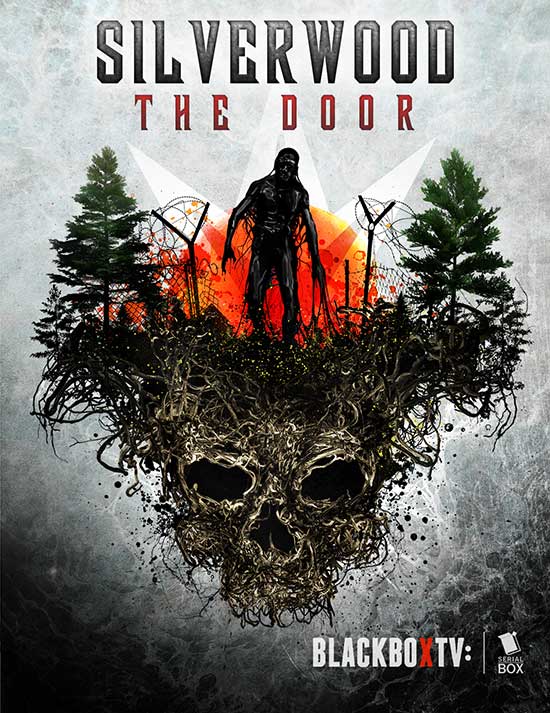 On October 3rd, Serial Box will release Silverwood: The Door, a horror series set in the remote, mountain town of Silverwood, California. The series, 3 months out from release, has already been covered in Dread Central, Den of Geek, Trending All Day, Ginger Nuts of Horror, Popcorn Horror, and Cemetery Dance Magazine, among others.
Silverwood was an original video production from Tony Valenzuela’s Black Box TV on YouTube, which has nearly 900,000 subscribers. Serial Box has collected an award-winning and critically-acclaimed group of horror and thriller authors to continue the story of Silverwood with the new series, SILVERWOOD: THE DOOR, in both text and audio. The talented team, who wrote the series in a TV style writers room, includes Brian Keene (The Horror Show with Brian Keene), Richard Chizmar (founder of Cemetery Dance Magazine),  Stephen Kozeniewski (Whispers of the APOC), and the Sisters of Slaughter Michelle Garza and Melissa Lason (Mayan Blue). You can find more about the creative team here.
Twin Peaks meets the X-files in this horror series full of homicidal boy scouts, ravenous black goo, mysterious doppelgangers, and a Stranger Things style corporate conspiracy. Deep within the forest of Silverwood, California, a crack between dimensions has appeared. A dark force that lurks among the trees is growing stronger, determined to return home if it can only gather the strength to open the door—bad news for a Boy Scout troop and the employees of Hirsch Capital on a company retreat nearby. As their darkest fears and impulses power the mysterious force, their bonding exercises take a deadly turn. Will anyone be able to keep their minds long enough to close the door before our world is torn apart?
Serial Box, which NPR recently called “the HBO of reading,” produces original series that are released in ebook and audio episodes through their app(s), website, and third party retailers (iTunes, Amazon, etc). Readers/listeners pay $1.59 for individual episodes or a season pass or subscription for approximately 20% off the whole season (10-13 episodes). Serial Box brings the power of appointment-based consumption to reading for the first time since Charles Dickens & Little Nell. Visit serialbox.com for more information.
Since launch, Serial Box has been called “The HBO for reading” by NPR, “a must have app for 2018” by Buzzfeed, “a best app of 2017” by Apple, and Den of Geek says that “Serial Box brings HBO style storytelling to prose.”
Share