I’ve recently completed a review for Mel Brooks’ 1995 film Dracula: Dead And Loving It, which takes a few lame swipes at Nosferatu (1922), Bram Stoker’s Dracula (1992) and Horror Of Dracula (1958), but seldom veers off into the slew of newer vampire movies, including Interview With The Vampire (1994). The problem with this approach is that sending-up old vampire cliches is no great cinematic innovation. 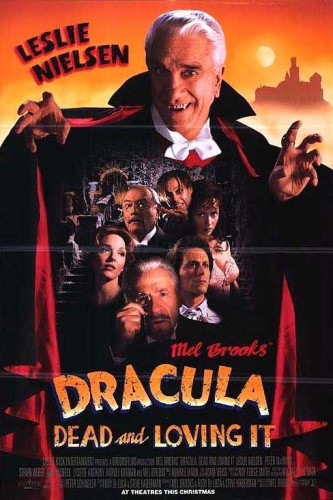 From Abbott And Costello Meet Frankenstein (1948) to Old Dracula (aka Vampira 1976), every traditional aspect of the genre has been picked over and poked fun at. Played by David Niven, Old Dracula is a vampire who, because of advanced age, is forced to host tours of his castle to get new victims. In an attempt to revive his long-lost love Vampira, Dracula sets out to collect blood from the bevy of Playboy Playmates living at his castle. 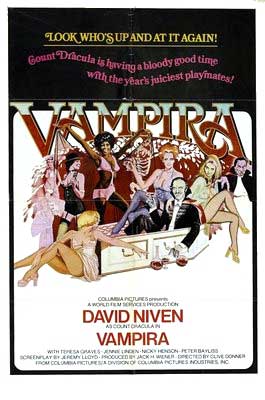 Some of the better films, such as Roman Polanski’s Fearless Vampire Killers, Or Pardon Me But Your Teeth Are In My Neck (1967) and Fright Night (1985), manage to mix equal doses of chills and laughs. Following the success of Repulsion (1965), The Fearless Vampire Killers was Polanski’s first big-budget film, a noticeably more upscale and lavish production than any of his previous offerings. One of Polanski’s most impressive achievements in presenting viewers with a perfectly executed parody while at the same time maintaining a consistent underlying sense of dread. On the other hand, Fright Night touches upon the same sense of humour that we encounter in Tremors (1990), in which the horror remains menacingly real and the comedy comes from the characters naturalistic reactions to said horrific situations.

Paul Morrissey’s Blood For Dracula (1974) took an effectively campy approach toward the subject, with Udo Kier as an ailing Count in dire need of ‘wirgin’ blood. The sex and violence are tinged with ironic humour as Kier goes from one daughter to the next, desperately seeking the virgin blood he needs to save his life. Some not-so-subtle social commentary is interwoven as the parents care less for their daughters future well-being than for the survival of their own wealth and palatial estate. The shocking sex-and-gore ending neatly closes Morrissey’s newfangled monster diptych and cements his status as one of independent cinema’s most original voices.

Director Stan Dragoti’s send-up of Dracula lore, Love At First Bite (1979) featured great comic performances by George Hamilton as the love-smitten sun-tanned Count and Arte Johnson as an aging, gleefully demented Renfield, but some of the ethnic jokes were uncomfortable back then, and they are outright painful today. 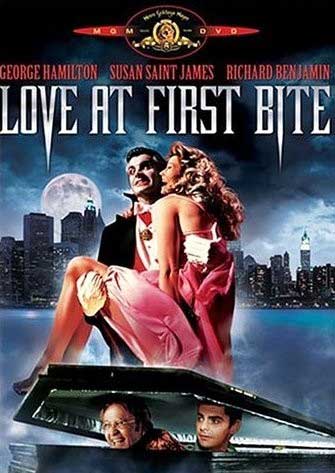 In the 1980s, with the world-wide popularity of Airplane! (aka Flying High! 1981) there came a new team of film parodists including David Zucker, Jim Abrahams and Jerry Zucker. Their most popular film franchises are the two Hot Shots! (1991 and 1993) movies and the Police Squad/Naked Gun adventures, and are responsible for the current Scary Movie franchise. Yes, after a quarter of a century, even their humour has become stuck in a formulaic rut, diminished to cutting-and-pasting entire scenes from current horror film trailers into their scripts, so the viewer doesn’t necessarily need to have seen the film they’re sending-up.

The list of bad vampire parodies far outweighs the good: Actor Jim Carrey would probably like to burn every copy of Once Bitten (1985) co-starring a singular unfunny Lauren Hutton; Grace Slick was actually far more frightening without her fangs and claws in Vamp (1986); not even Geena Davis’ amply-displayed cleavage could salvage Transylvania 6-5000 (1985); death by slow exsanguination is preferable to watching Mark Pirro’s A Polish Vampire In Burbank (1985); My Best Friend Is A Vampire (1988) was no match for Teen Wolf, its obvious inspiration; Jim Wynorski’s Transylvania Twist (1989) was only slightly less awful than Fred Olen Ray’s Beverly Hills Vamp (1989); with Innocent Blood (1992) director John Landis came no-where near matching the success of his earlier An American Werewolf In London (1981); Eddie Murphy put another nail in the coffin of his career with A Vampire In Brooklyn (1994). Even a relatively well-received comedy like Buffy The Vampire Slayer (1992) failed to find an audience a fraction as large as that of the more serious vampire efforts.

When it comes down to the final analysis, not even Love At First Bite comes close to the inspired lunacy of Abbott And Costello Meet Frankenstein. Bud and Lou were in top form, and Universal saw them as the perfect vehicle to milk more profit from their creaky monsters. Lon Chaney Junior was back as Wolf Man Larry Talbot, out to prevent the Frankenstein monster (Glenn Strange) from being fully revived by Count Dracula (Bela Lugosi), with the reluctant assistance of two hapless baggage clerks (Bud and Lou). For only the second (and final) time in his career Lugosi played Dracula on screen, in a performance that was amazingly layered – both menacing and humorous. His scenes with Lou Costello were incredible, as Dracula strokes the nitwit’s ego so he can implant his simple brain into the body of the monster, saying “What we need today is young blood – and brains.” While the comedy is deft and precisely timed, the studio made sure not to mock the monsters themselves. Already seen as remnants of a bygone era (just seventeen short years after the the original Dracula and Frankenstein were released in 1931), Universal still treated them with the respect they deserved. For one last time, the classic monsters got to bask in the applause of appreciative audiences. 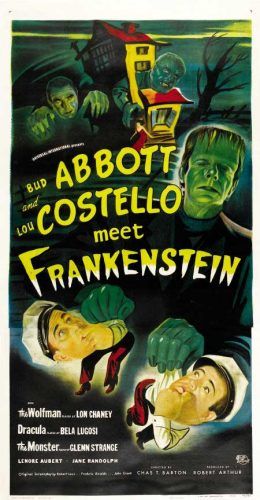 It’s vitally important that you join me for next week’s edition of Horror News, because an old gypsy woman told me that if you don’t read all my articles from now on, the entire world will be destroyed. Normally I’m highly skeptical of such claims, but she was just so certain, I feel we’d best not take the risk. So enjoy your week, and remember, the survival of the entire world depends on you. Toodles!