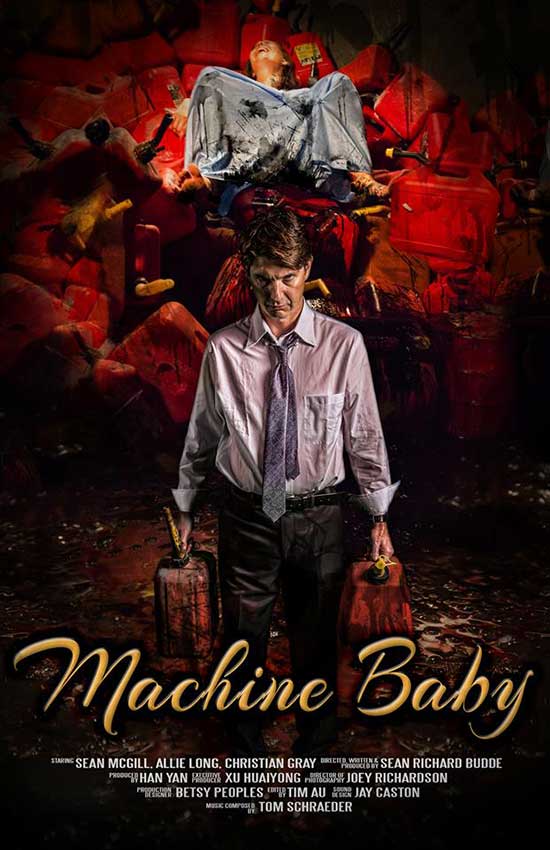 A struggling paparazzo gets pulled into a mad pageant manager’s plot to win Miss America while trying to break the story.

More short films, kiddies! Today we have MACHINE BABY, written and directed by Sean Richard Budde. This film was awarded the title of “Best WTF Short Film” at the GenreBlast Film Festival. If that acronym means what I think it means, then it is perfectly descriptive.

I should point out that the title card on my copy gives the following warning – The following video has been identified to potentially trigger seizures for people with photosensitive epilepsy. Mainly this refers to the title sequence of the film, but they aren’t kidding.

Anyway, the story follows a “paparazzo” (which is assume is the singular term for the collective term “papparazzi”) who is looking to break a major story concerning the Miss America pageant. Our nameless journalist (played by Sean McGill) finds himself at the basement window of a darkened home in the middle of nowhere. We don’t know exactly what’s going on in there, but it doesn’t sound good.

Our hero starts to document what he sees but finds himself confronted by a man (Christian Gray) who makes it perfectly clear that the reporter is not welcome and chases him off.

Not to be deterred, the reporter returns the next day to get his scoop on whatever is going on in that house. However, like many who pursue the truth too closely, he finds himself the star of his story.

I would be lying if I said I had any idea what exactly happens in this film. I mean, there’s a point at which its pretty obvious but otherwise…yea, I got nothing. It is an interesting film, strange and surreal but definitely interesting. Perhaps there is an underlying message here about celebrity culture and the public’s fascination with it. I have no idea.