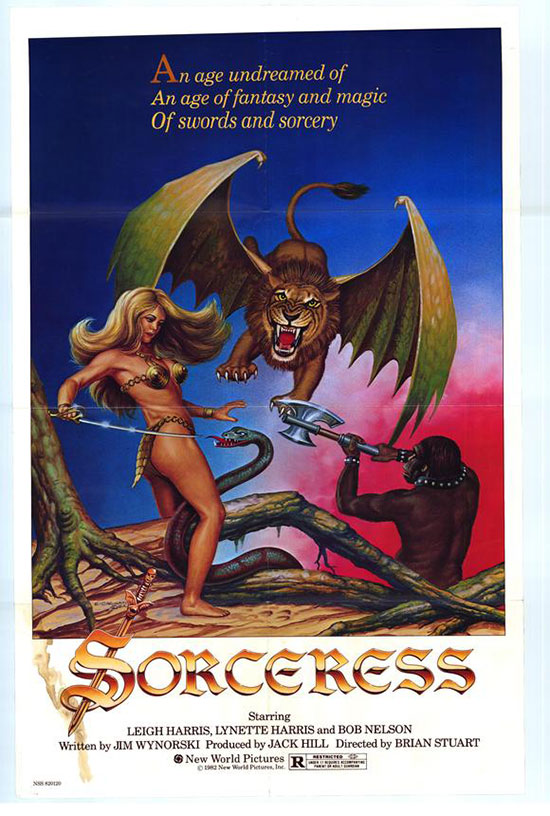 Sword and sorcery story of the cosmic struggle between white magic and black magic.

When I saw the name Sorceress on the list of movies I had to review, I was excited at first until I saw that it was the 1982 movie and not the one from the 1990s. While the latter one is not considered a good movie by any stretch of the term, it at least had Julie Strain in it. That’s always a plus in my book. Instead, what I got was a Roger Corman produced American/Mexican joint venture that shows incompetence on every level. 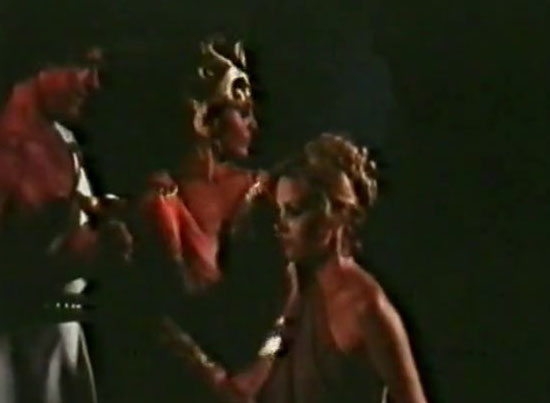 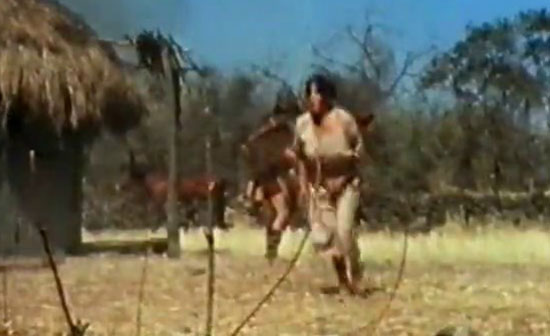 The film takes place in ancient times and starts with the evil sorceror who wants to sacrifice his firstborn child to his god, Caligara. (I swear that it sounds like he’s saying Calgon). He tracks down his wife, who has yet to give birth, but his plans are thwarted when he is defeated by the warrior Krona. Traigon’s wife dies after giving birth to twin daughters, and Krona swears that he will raise them to be great warriors and magic users.

Twenty years later Traigon returns and hunts down his twin daughters. Apparently, he still plans on making the sacrifice, and his daughters end up having to fend off his goons with the help of a barbarian, a viking, and the most annoying satyr ever put on film. They have to use their warrior skills and magic use (that they only seem to have when it seems convenient to the plot) to stop Traigon’s evil. 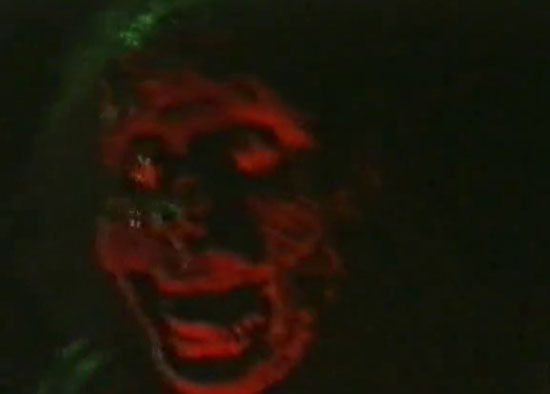 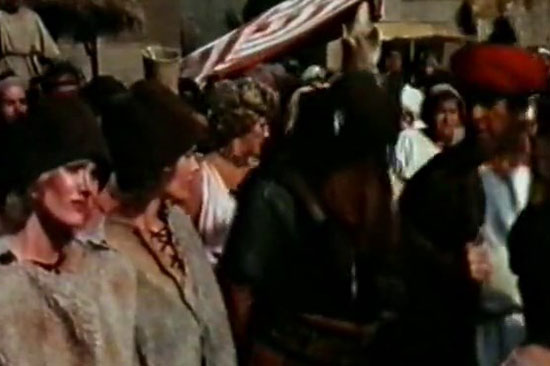 This cinematic stink bomb hits all the checkmarks on the list of things would expect to find in exploitation flicks. For instance, terrible acting. Not a single person on this film showed any talent for the craft. Actors either overacted wildly or gave performances that made a brick wall seem more lively in comparison. Our main characters were played by former Playboy Playmates and identical twins Leigh and Lynette Harris. Neither one had an ounce of talent between the two of them, and it was obvious that they were only hired for their looks and their willingness to doff their clothing. Their first scene of the flick, as a matter of fact, is them swimming naked.

Even the director recognized where their strengths lay and wasted no time showing them off. Not only do the twins show an inability to emote, but they perform their fight scenes with the coordination of someone just coming out of an alcoholic blackout period. Most of the movie seems content of them having to be saved by their comrades most of the time. For highly trained warriors, the sisters do tend to find themselves being held hostage a lot. 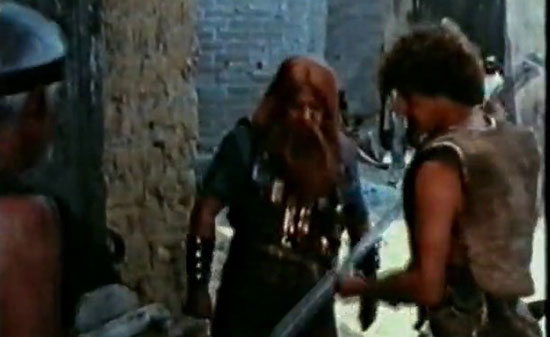 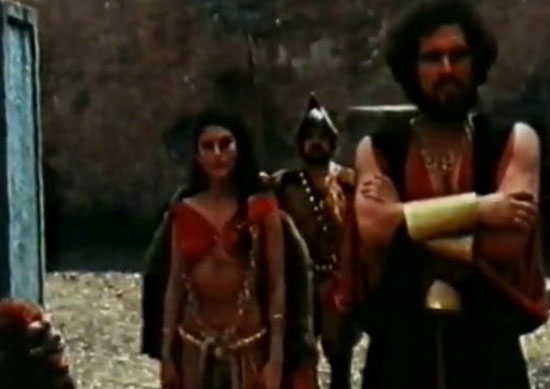 Another problem you’ll run across is the lighting. Whenever they have a nighttime scene, the lighting is so poor you’ll struggle to see what the heck is going on. Sometimes you’ll be able to make out some of the action, and other times you’re barely seeing vague shapes in the darkness doing things. You might get a rough idea what’s happening, but that’s okay because you’ll probably stop caring after the first or second night scene. Since the movie begins with one, it starts out putting its worst foot forward.

Of course when I saw that Jim Wynorski’s name in the opening credits as the writer, I had a sinking sensation. His strengths don’t lie in writing (or directing, or anything really), so a little trepidation is always a healthy thing when you see him attached to a film. The story is actually nonsensical at times, a little unoriginal, and has some stilted dialogue. That’s not to say that the writing was irredeemably horrible, but it could have been fixed with time, energy, money, and the assistance of someone with a bit more talent.

Since this is a film with a very limited budget, the special effects, makup, sound, and sets all suffered for it. The special effects were cartoony to the point of breaking any suspension of disbelief you may have had (if you still cared enough about the movie to still have any suspension of disbelief). Most of the makeup and costumes are slipshod at best. Hilariously most of the creatures are just people in furry outfits and rubber masks that are less genuine looking than someone trying to pass Monopoly money off as real currency.

The sound sometimes seemed like it was muted or boom mikes were held too far away from the scene. Either way, you’ll not have a great time trying to hear anything without cranking the sound way up. The music is not only kind of bland and generic, but I’m pretty sure it came straight from another movie entirely. 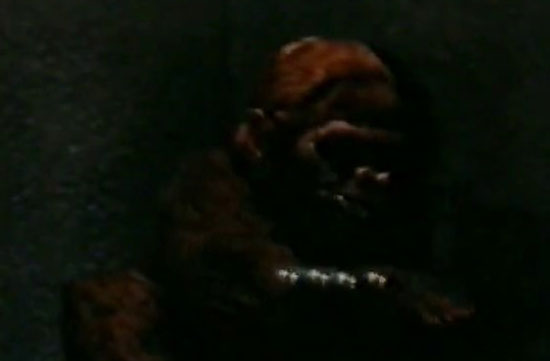 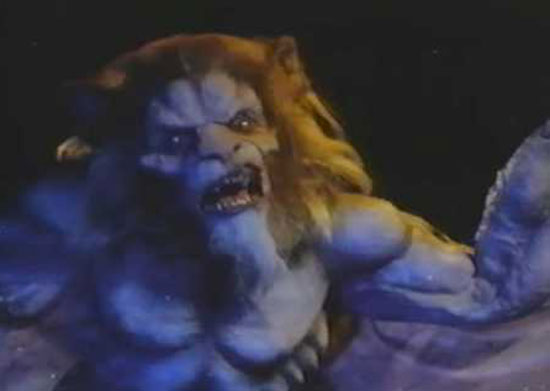 When it comes to direction, things appear just as incompetent. While the name on the credits is Brian Stuart, it was a pseudonym used by Jack Hill. Hill was known for his output of B-movies that have become cult classics over the last few years. While I don’t think people will place his skills on the same pedestal as Steven Spielberg, he was still fairly decent at what he did despite what Sorceress shows. Interestingly, after some digging around, it turns out that Roger Corman allegedly never delivered the budget that was promised.

This forced Hill to cut corners that he felt hurt the film. As a result, he asked to not have his real name linked to the film. Whatever the case may be here, it caused a riff between him and Corman. It could be that Hill was just covering the fact that he did a pretty cruddy job with this film and wanted to shift blame. 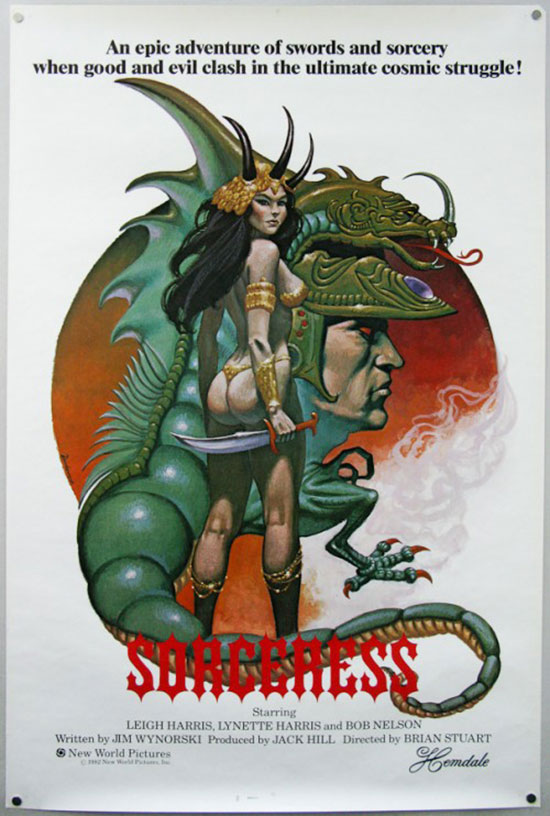 That story about why Jack Hill had his name taken off the film is the most interesting thing to come from Sorceress. Nothing else about it is entertaining. Sure you get the thrill of seeing the Harris twins nude at the beginning of the film, if you’re into that kind of thing like I am, but it’s not enough to keep you invested in anything that happens. It’s actually kind of boring, and no greater sin can be committed in b-grade flicks like this one.