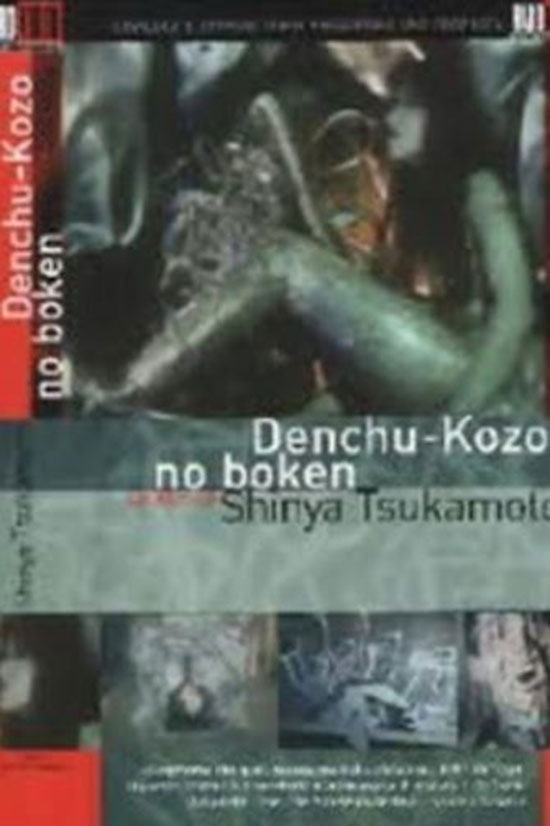 Hikari is a boy who is bullied and teased by the other boys at school because he has the odd distinction of having an electricity pole growing out of his back. However, one of his classmates, a girl named Momo, comes to his rescue. Hikari thanks her by sharing his secret possession with her: a time machine. He then activates the time machine which transports him 25 years into a dark, dystopian, world of the future. There he encounters members of the Shinsengumi Vampire Gang in the process of hunting a woman named Dr. Sariba who is revealed to be Momo’s future self. She explains to Hikari that she had been long expecting his arrival from the past and that he has a crucial role to play here — he and he alone must save the world.

There is something instantly charming about stop motion film. Most of us have fond memories of slick Claymation romps like Nightmare Before Christmas and James and the Giant Peach. But the style has been with us nearly as long as film itself, and what we recognize today as stop-motion (the likes of Paranorman, Kubo and arguably The Lego Movie) is a complete transformation of what has come before. Travel back as recently as the 1980’s and stop motion gets real scary, real fast. It has popped up in everything from feature films to music videos to children’s cartoons and until recent years it always exuded a certain unsettling energy to whatever it touched. There is something about those herky-jerky movements that is instantly upsetting to the brain, yet the limitlessness of the art form is a feast for the eyes and a wonder to imagine “how did they do that?” 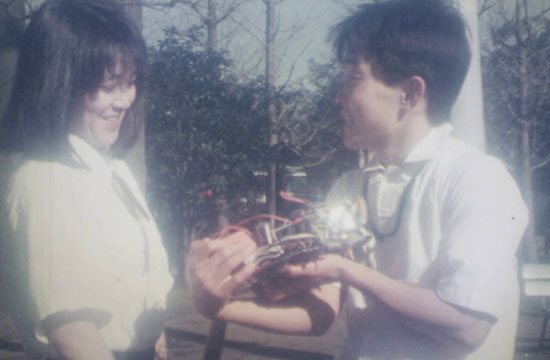 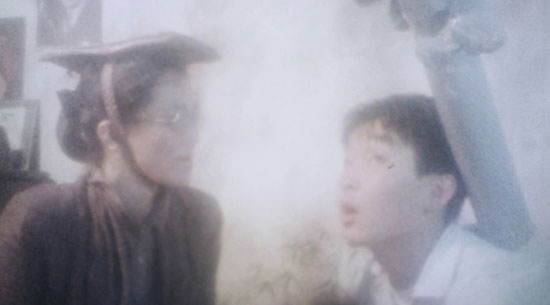 Shinya Tsukamoto is a name among great directors in cinema. His film Tetsuo: The Iron Man, the story of a man slowly turning into a mass of metal, is considered his masterpiece and still revered as one of the most profound body horror films of our time, not to mention a marvel of stop-motion animation. (He’s also the director of one of my past reviews and personal favorites, Hiruko the Goblin.) But predating Tetsuo by two years is an earlier experiment in the frenetic style that would become Tsukamoto’s signature: The Story of Electricity Rod Boy.

Hikari is a teenage boy who is outcast for the unusual handicap of having a large metal pole growing out of his back. His only friend is Momo, a schoolgirl with a kitana who regularly protects him from bullies. One day while showing Momo his (homemade?) time machine, he is suddenly thrust 25 years into the future where the city is dark and the streets are run by a gang of cyberpunk vampires. He crashes into the future in the middle of a scrap between the vampires and a woman who seems to recognize Hikari. After their escape, the woman introduces herself as Dr. Sariba, a former schoolteacher who now fights the vampire menace. She tells Hikari that he is the key to stopping the vampires forever, and that he must fulfill the legend of the Electricity Rod Boy. 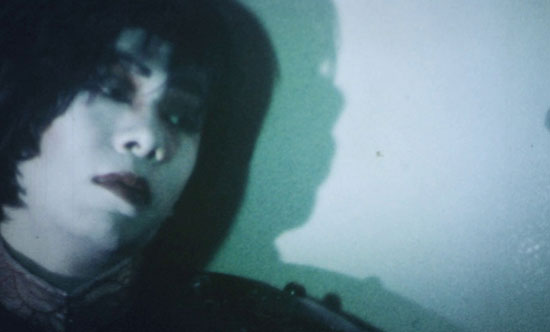 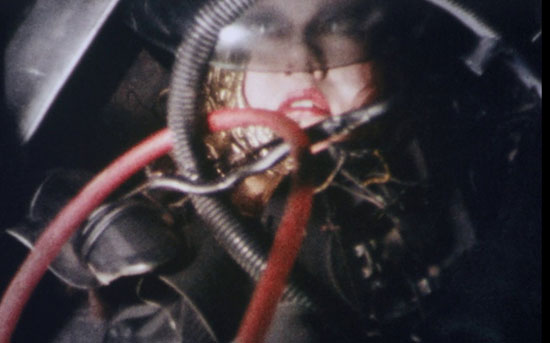 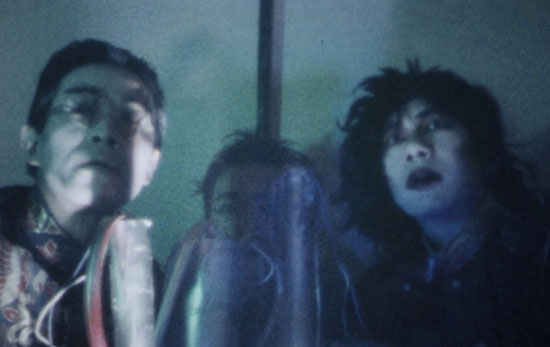 Meanwhile, the vampire gang is working on their latest weapon—the previous “Adam Bombs” they have dropped have only temporarily blotted out the sunlight with noxious clouds, and they’ll need stronger stuff to erase the sun permanently. This new bomb requires a bombshell: a human girl called Eva serves as the power source, lending that much needed human element to nuclear warfare. The bomb is both a weapon and a womb, Eva having been harvested within and feeding from/being fed off of by the machine since conception. The gang are urged to wait until Eva has fully matured before making her a vampire—thus summoning the full energy of the bomb?—but one of them cannot resist her sexy underage charms and bites her ahead of schedule. This results not only in Eva becoming a vampire, but also fully becoming one with the weapon in a spectacular stop-motion sequence and becoming a sentient mecha battle suit of bloodlust. It is up to Hikari and Dr. Sariba to stop the vampires and unlock the true power of the Electricity Rod Boy. 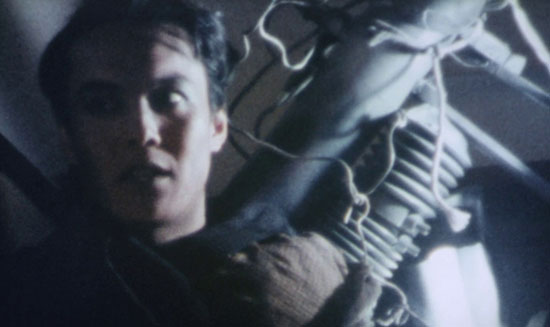 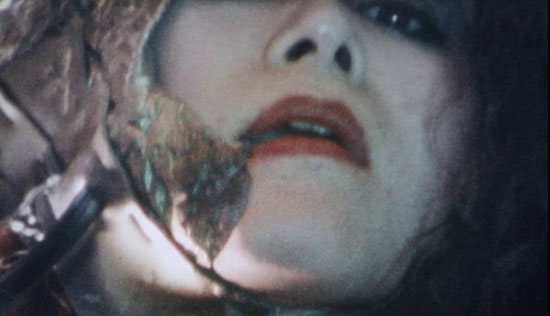 It wasn’t easy locating the plot in this frantic little film—actually, it’s nearly impossible to absorb or analyze much of anything as the movie is playing. The camera moves feverishly through nearly every sequence, and mind-boggling effects come and go in an instant. The actors mimic the style of silent film, with insane makeup that leaps off the screen as much as their overdone zany movements. This cartoonish vibe is only heightened when the actors are actually put through stop-motion themselves, several still frames poised to present the actors as moving through the streets without actually walking. Much of the “story” is left up to visual interpretation, but some of these visuals are so bonkers that you often come up empty at what it could all mean. 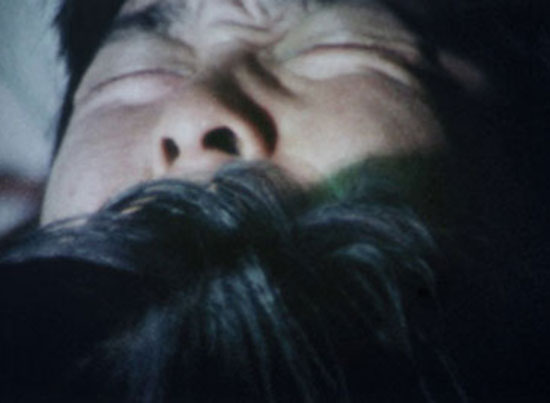 Despite the dizzying aesthetics and often baffling jumps in plot and logic, the film is actually quite engaging and ends up having an even greater effect after the credits roll. Much like a roller coaster, you only realize just how much fun it was after you get off of it, and this movie brings that rush of juicy adrenaline by way of women fusing with wires and men shooting electricity out of their backs. Electricity Rod Boy is 45 minutes of sensory overload that shouldn’t work but somehow ends up being a total delight. If you’re a fan of innovative visuals and don’t mind just letting a film wash over you in waves of insanity, this is a weird little gem that cannot be missed.