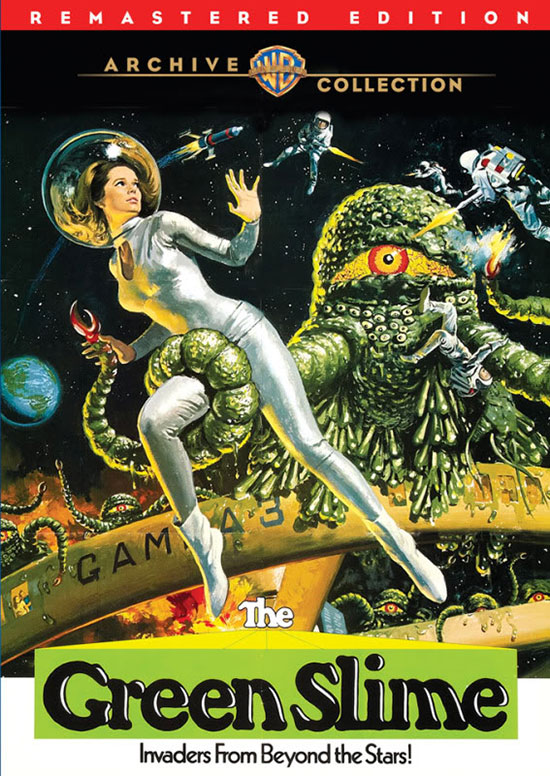 Cells from an alien life form are accidently brought aboard the space station Gamma-3. They quickly grow into an army of deadly creatures with electrified tentacles hell bent on killing the crew.

Here’s some fun “elevator pitches” for science fiction movies. How about having astronauts land on an asteroid that’s on a collision course with earth? Wait, it gets better— to save the world they have to use drilling equipment to bore holes in the rocky surface to plant nuclear bombs inside and blow the renegade asteroid into space dust. Not working for you? Okay, try this one on. How about having an alien life form that looks harmless in its infant state brought aboard a space ship. Then it breaks loose, transforming into a monstrous killing machine that slaughters the crew one by one! Well these ideas may have been the individual concepts for Alien (1979) and Armageddon (1998) but years before those famous (and infamous) epics the scenarios were mashed together in the 1968 Japanese American co-production THE GREEN SLIME. 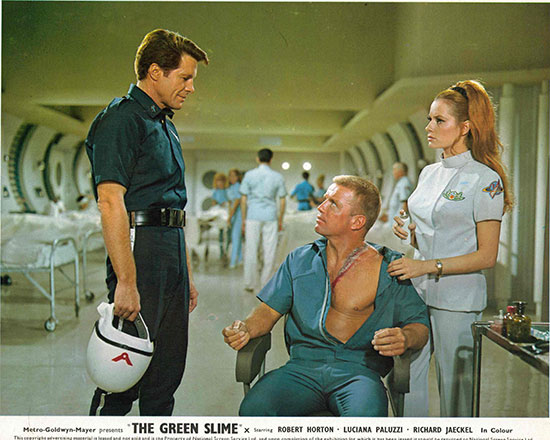 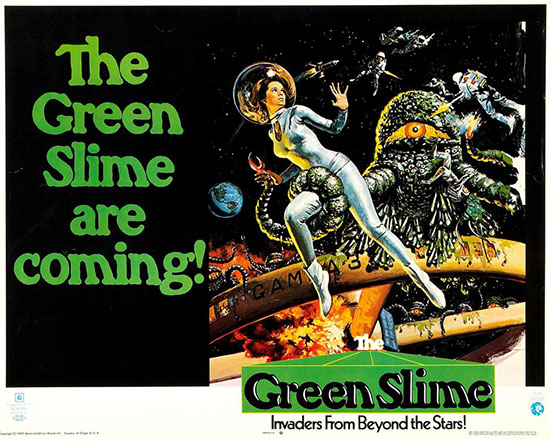 Just because The Green Slime predates Alien and Armageddon doesn’t mean it’s some visionary piece of science fiction cinema. On the surface it’s a subpar space opera with rubber-suited monsters, cheesy miniatures and a cast of B-movie veterans struggling to kill aliens while keeping a straight face. But despite its myriad of deficiencies The Green Slime is a charming time capsule of mid sixties camp. Watching its colorful “mod” sets, plastic helmeted astronauts and man-in-a-suit monsters is like sprawling in a bean bag chair, sipping a can of Schlitz while feeling the luxurious shag carpeting beneath your toes.

Scientists aboard the Gamma-3 space station discover a massive asteroid careening towards earth. UN Space Command dispatches their bravest and squarest jawed astronaut (Robert Horton) to command the mission to destroy the deadly celestial body, which looks like a cat toy you’d find moldering under the couch. But our hero has a long simmering feud with the space station’s commander (Richard Jaeckel) who stole his fiancée (Luciana Paluzzi) who happens to be the space station’s resident doctor. Putting their differences aside they land on the asteroid, drill holes, plant nukes and zip back to the space station, barely escaping the atomic blast. The earth is saved, but during their escape a small bit of green slimy alien life adheres itself to an astronaut’s space suit and hitches a ride to Gamma-3. Due to the station’s high oxygen (or testosterone) levels the little blob of space spooge sprouts into a menagerie of man sized monsters shooting electricity from their tentacles. Will the astronauts defeat the alien invaders? Will the big haired sexy doctor dump her beau for her brick headed ex fiancé? Will our two heroes finally give in to their seething homoerotic tension and be as god made them? Its all part of The Green Slime experience.

The most charming thing about The Green Slime is how the filmmakers lovingly revel in its cheesiest elements. Those miniature rocket ships don’t zip by in an instant— instead the producers proudly linger on them as if they were unveiling 2001 A Space Odyssey (1968). The unconvincing rubber monsters aren’t confined to fleeting, shadowy glimpses— Nope, they’re given long loving close-ups under brighter lights than a baseball game. I love the filmmakers for having the balls to do that. Plus Alien never had a rocking psychedelic theme song. Why Richard Delvy’s title tune, actually entitled The Green Slime, never made it onto Lenny Kaye’s classic psychedelic music anthology Nuggets is beyond me. The Green Slime’s other achievement is compressing entire plot of Armageddon into the first fifteen minutes. Why couldn’t Michael Bay have done that?

The Green Slime was a coproduction between America’s MGM Studios and Japan’s Toei Company LTD. But oddly for a Japanese based production, the entire cast, right down to the extras, is entirely western. This presented Toei with a genuine casting challenge. As a result the crew of Gamma-3 are a mix of struggling American fashion models plucked from Tokyo’s fashion runways and American sailors on shore leave from the nearby Yokosuka Naval base. That’s right, those glamorous young models were thrown together with guys who’d been stuck on an Aircraft Carrier deployed off Vietnam for six months! Take a good look boys… cause this is what you’re fighting for! Hidden among the space stations impossibly pretty female crew is blonde haired Linda Miller who, a year earlier, had been the lead in the Japanese American co-production King Kong Escapes. If you ever wake up with a hangover skip the Advil and coffee and try a double bill of The Green Slime and King Kong Escapes— your pain will be forgotten. 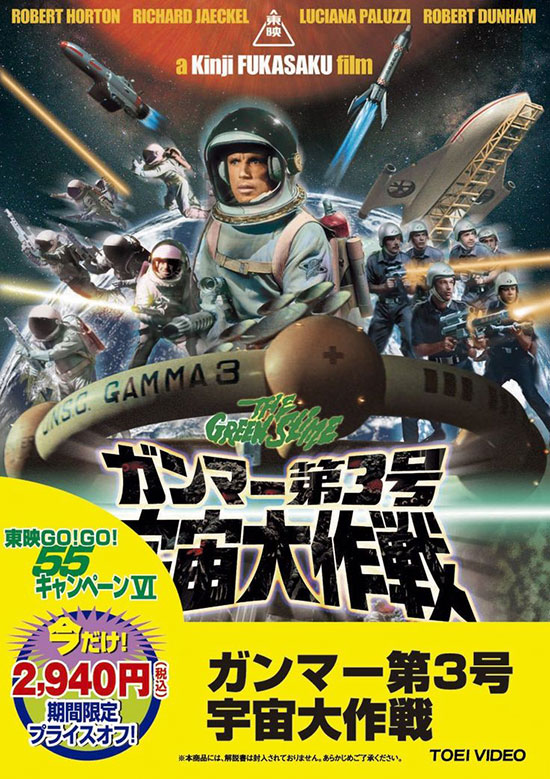 The Green Slime has the secret weapon every B-Movie needs- Richard Jaeckel. Jaeckel was a prolific, academy award nominated actor who bounced between supporting roles in big budget films and starring turns in B-pictures. In fact he was nominated for a best supporting actor Oscar for Sometimes A Great Notion (1970) right after he starred in The Green Slime. What made Jaeckel so special was that (like Shelly Winters) he always delivered a class-A performance in any film, regardless of its quality. If you watch The Green Slime carefully you’ll notice that he’s always moving, or emoting— giving the audience a little something extra. He never steals scenes from his co-stars, but he’s always the most interesting thing onscreen. Some of his other memorable genre roles included the ill fated naturalist in William Girdler’s Jaws knock off Grizzly (1976) and the kidnapped journalist in Ishiro Honda’s wonderfully crazy fantasy Latitude Zero (1969). 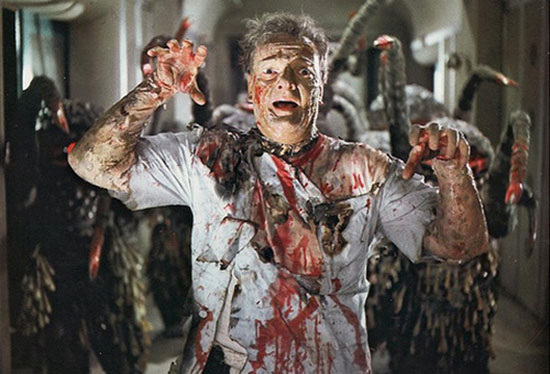 Technically The Green Slime is a sequel to Antonio Margheriti’s pioneering quartet of Italian science fiction films all set aboard the Gamma One space station. These included Wild Wild Planet, War Between the Planets, War of the Planets and Snow Devils– all released in 1966.  I’m not sure why the great Margheriti wasn’t asked to helm this final chapter. The revered Kinji Fukasaku directed this final trip to Gamma-3 before going on to an illustrious career that includes the unforgettable Battle Royale (2000).

MGM gave The Green Slime a surprisingly wide release. I recall it playing theatrically in Poughkeepsie New York (don’t laugh, that was home!) at indoor theaters and then popping up mere weeks later as the top billed feature at local Drive-Ins. Only a few months later it was broadcast on network television. Most of Slime’s American success can be traced to the eye-popping poster that looks like it was ripped from some fantastic science fiction pulp. 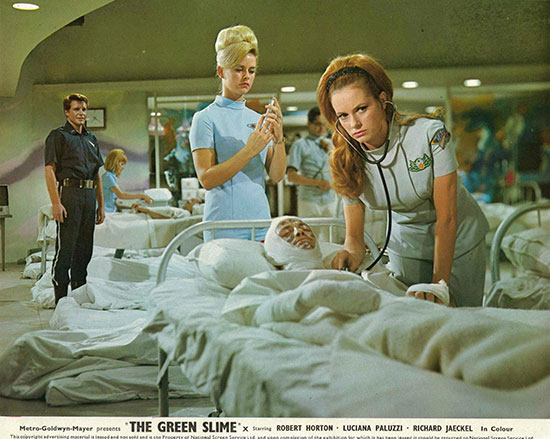 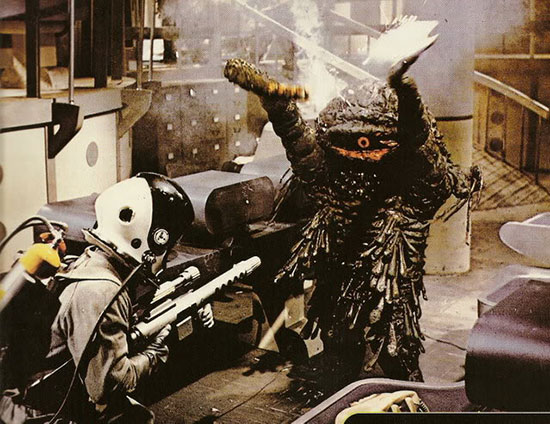 Here’s a final fun factoid— The Green Slime had the dubious honor of being the very first film skewered by Mystery Science Theatre 3000. It was featured on the pilot episode that initially sold KTMA Television on the series. Joel Hodgson instantly set the show’s tempo when, over the films opening shot of a cheesy model space station, he quipped, “It’s interesting that this film was made the same year as 2001 A Space Odyssey.” Not only is that true, but it was also made by 2001’s MGM studios! 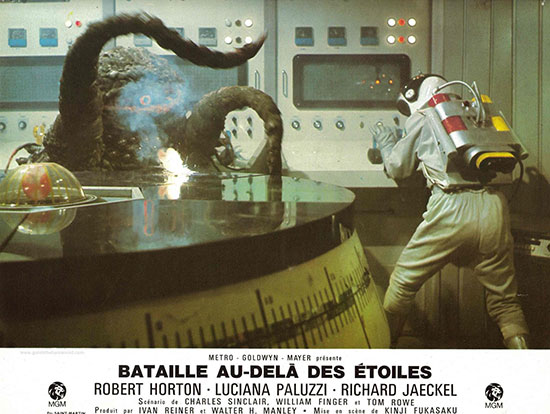 In closing, if you wake up craving a piece of nostalgic science fiction fromage The Green Slime is exactly what you’re looking for. And don’t forget to sing along to the psychedelic theme song (later covered by the Fuzztones) for a totally immersive experience. Everybody sing… You’ll believe it when you find… Something sreamin’ ‘cross your mind… GREEN SLIME… GREEN SLIME! 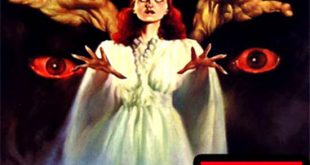 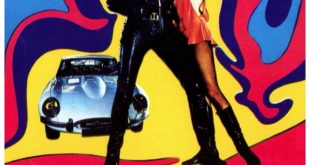