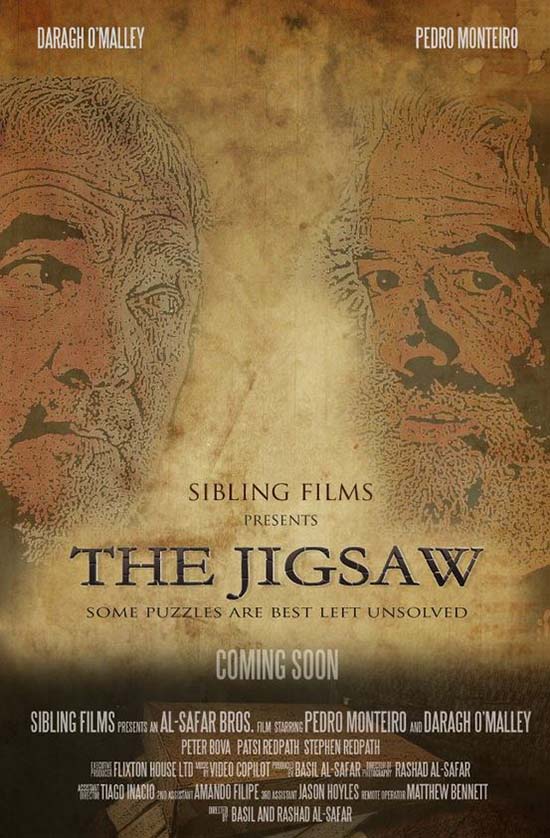 The purchase of a mystery Jigsaw Puzzle from a strange and unsettling vendor leads a man to an evening of frightening consequences.

More short films, kiddies! Today we have THE JIGSAW from Sibling Films, written, directed, and pretty much everything else by Basil and Rashad Al-Safar.

An old man (Pedro Monteiro) wanders through a busy marketplace, listening to the hawkers and vendors as they push their wares. The man doesn’t seem very interested in anything they are selling.

He enters an antiques shop and half-heartedly begins perusing the shelves and bins. He comes across an umarked box on a back shelf. Intriqued, he asks the shopkeeper (Daragh O’Malley) what’s in the box.

The shopkeeper blows him off at first, and tells the man that he doesn’t really want it. The man continues to push for a price. Eventually, the shopkeeper all but tells him what an evil thing it is and that maybe he should leave it be. But the man produces his money and leaves with the box anyway.

Once back in his dark and empty home, the man opens the box and begins to assemble the puzzle inside. Maybe he should have listened to the shopkeeper….

Brothers Basil and Rashad based the film on a ghost story they remembered being terrified by when they were children. I don’t know what the original story was, but they have done an incredible job of creating a beautiful nightmare for the screen. Considering that this is (as far as I know) their first film production, they have a real grasp on how to tell a story cinematically.

Visually, it’s stunning. A good amount of time is spent on the man’s lonely drive home as a storm rolls in. The credits do say some arial photography was used, so the images are real and not created. But they have been enhanced in such a way that makes everything so surreal and feeds the feeling of foreboding.

In the antiques shop and the man’s home, the use of light and shadow is expert level. This may be a lower budget production (according to IMDB, the budget was around 3000.00 british pounds, which is about 4000.00 in US dollars), but the brothers used their resources very wisely. The production quality is very high. The sets are well populated with appropiate items. Everything just seems…real. It’s a perfect illusion.

While a few other characters appear on the screen, the story is mainly carried by Mr. Monteiro and Mr. O’Malley. I found a few credit listings for Mr. Monteiro and many, many for Mr. O’Malley. Both men have a good amount of experience under their belts, and their performances are pitch perfect. Not too much, not too little, but just right.

The story isn’t complete, as most campfire stories usually aren’t.  There is just enough room in the narrative for the viewer to fill in the blanks with whatever they want to complete the puzzle (sorry…pun intended) and work out the rest of the story for themselves.

This film has won awards at international film festivals in the US, UK, Portugal, and the brothers’ home country of  Bahrain. There are probably more, actually. I can see why. This is a perfectly assembled horror story. All the elements are on point. The pacing of the story is perfectly timed to the score. It really just gets everything right.