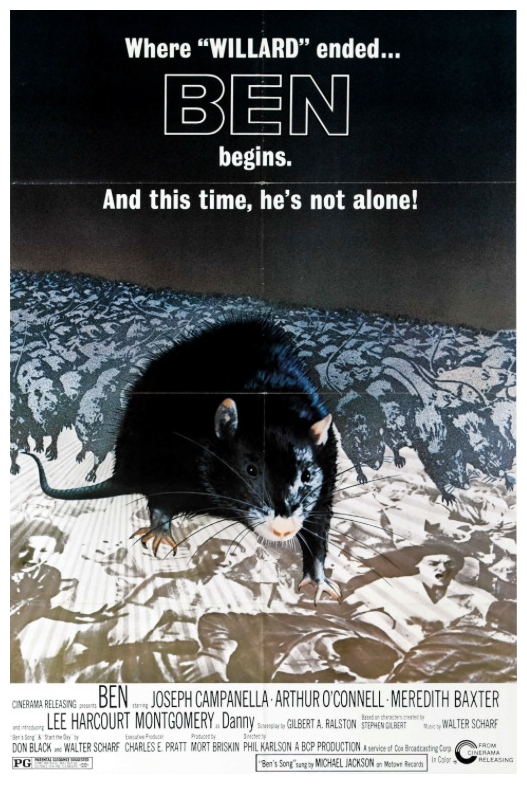 “A lonely boy named Danny Garrison befriends Ben, the rat leader of the swarm of trained/telepathic rats found in Willard (1971). Ben becomes the boy’s best friend, protecting him from bullying and keeping his spirits up in the face of a heart condition. However, things gradually take a downward turn as Ben’s swarm becomes violent, resulting in several deaths. Eventually, the police destroy the rat colony with flamethrowers, but Ben survives and makes his way back to Danny. The film closes with Danny, tending to the injured Ben, determined not to lose his friend.” (courtesy IMDB)

Rats were at the centre of Willard (1971) directed by Daniel Mann and produced by Bing Crosby. Based on the novel Ratman’s Notebooks by Stephen Gilbert, the film focuses on Willard Stiles (Bruce Davison), a friendless social misfit who develops a strange affinity for rats. Willard was the surprise hit of the year with good reviews and even better box office returns. Some say it inspired films with wild animals as predators like Jaws (1975), and psychological thrillers with social outcasts as protagonists like Carrie (1976). Unlike most ‘Nature-Strikes-Back’ films, it’s the human characters, rather than the animals, that drive the story to its climax. Willard proved popular enough to warrant a sequel but, since our protagonist has been killed off, the producers were left with little choice but to follow the adventures of Willard’s pet rat Ben (1972). 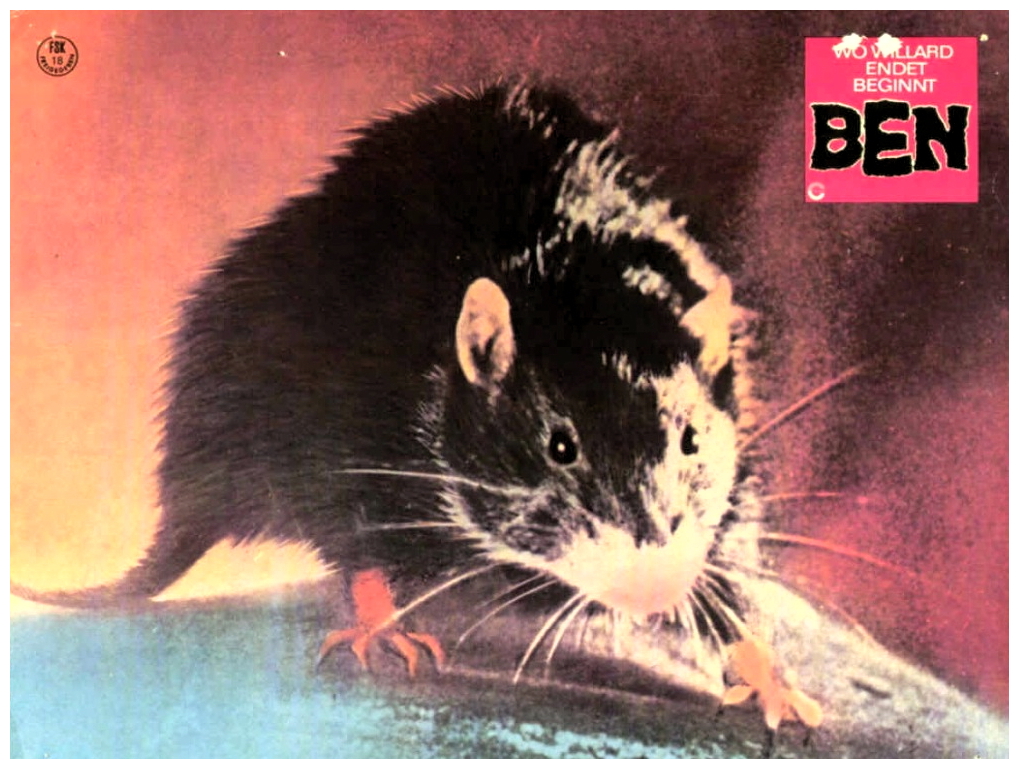 A lonely boy named Danny Garrison (Lee Montgomery) meets Ben, who becomes the boy’s best pal, protecting him from bullies and generally cheering him up, as Danny suffers from a terrible heart condition. Unfortunately, due to lack of food, Ben’s ever-increasing family becomes rather violent, resulting in several deaths around the community. Eventually, the police destroy the rats with flamethrowers, but Ben survives and makes his way back to Danny. The film closes with Danny tending to the injured Ben, determined not to lose his friend. The theme song heard over the closing credits is arguably the film’s only claim to fame. Bing Crosby Productions hired Don Black and Walter Scharf to compose the song, and wanted teen idol #1 Donnie Osmond to perform it. Donnie was a very busy boy back then and refused, leading to the producers asking teen idol #2 Michael Jackson to sing the ditty instead. 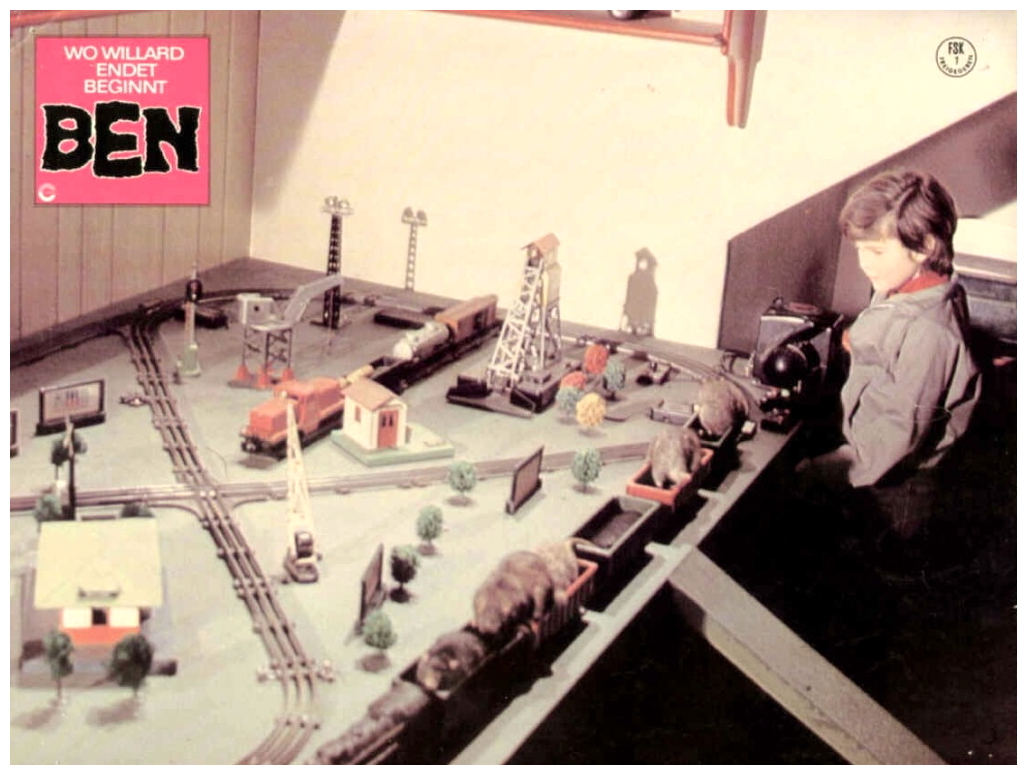 In fact it was a pretty good song, calm and mellow, and quickly went to the top of the charts. It won the Golden Globe that year for Best Song, and was nominated for an Oscar, but the song itself contrasts greatly with the film’s horror content. If it wasn’t for the song would the film be remembered at all? Normally I’d say no, but nostalgia is strong with some people, and I get the impression many supporters of Ben had seen the film on television when they were young, and it somehow left a mark. For a sequel, Ben is relatively self-contained, and an unwitting viewer would probably have no idea that this was a sequel to another film. Ben is littered with familiar faces, character actors known mostly for their work on television – Rosemary Murphy, Paul Carr, Richard Van Vleet, Kenneth Tobey – and one who is yet to find fame. Danny’s sister Eve Garrison is played by Meredith Baxter, future mum of Michael J. Fox in the popular situation comedy Family Ties. 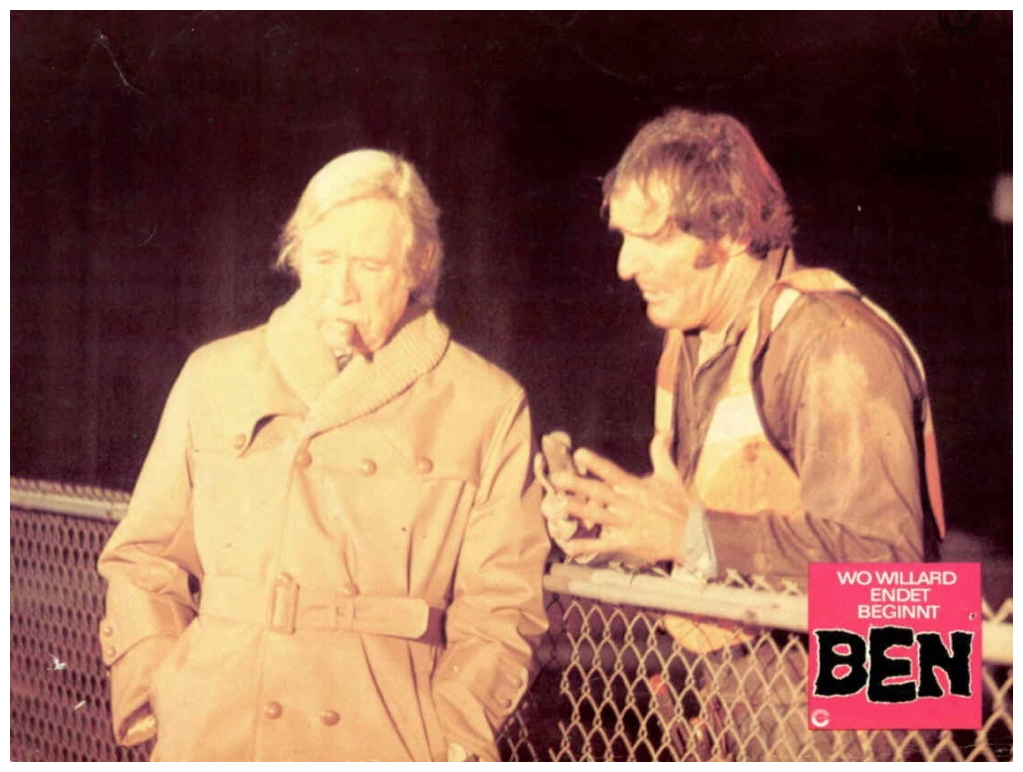 But most of the film’s running time is devoted to big black Ben and his pet boy Danny, played by Lee Montgomery, who was a photography model before becoming an actor like his father Cecil Montgomery and sisters Belinda Montgomery and Tannis Montgomery. He appeared in a fistful of feature films – The Million Dollar Duck (1971), Pete’n’Tillie (1972), Burnt Offerings (1976), Mutant (1984), Girls Just Want To Have Fun (1985) – but made most of his money appearing in dozens of television shows and made-for-TV movies during that time. Then, in the mid-eighties, Montgomery suddenly quit from acting to take up other interests (namely music and marketing) and resurfaced in 2012 at many horror conventions, signing photos and posing for pictures with fans but, to this day, his full-time day-job is selling Californian real estate. 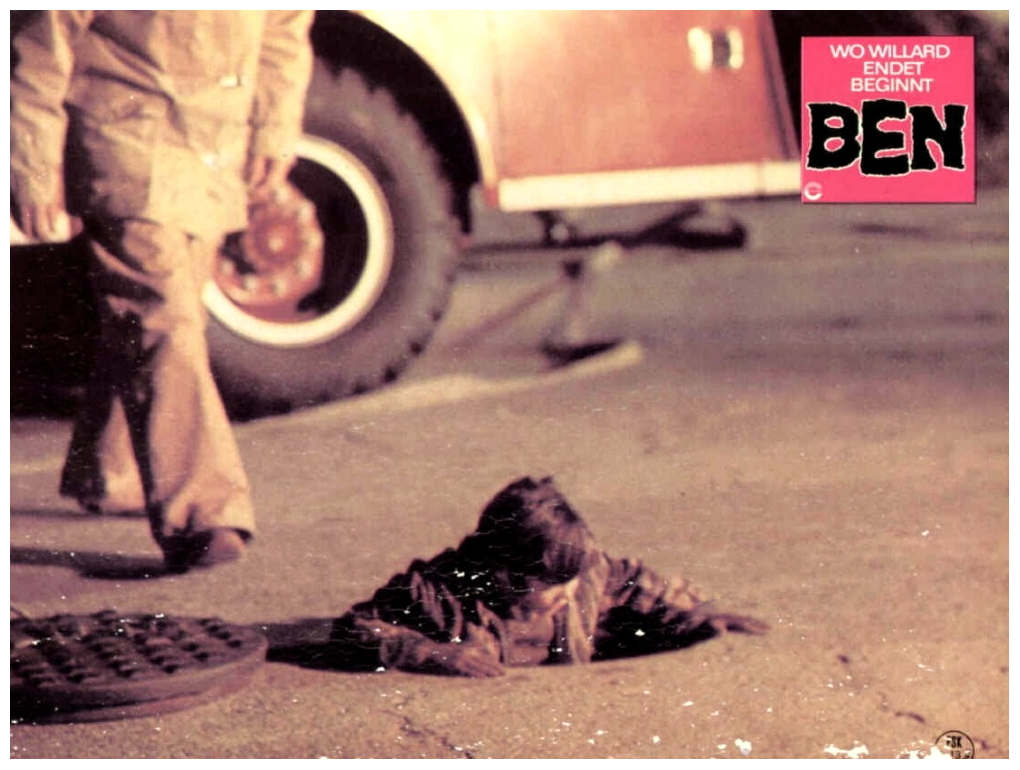 Other actors of note are Joseph Campanella as a police detective with nothing better to do, and Arthur O’Connell, as the city’s only journalist, has the film’s best lines, peppered between the ‘rat action’ and Danny playing with Ben and his puppets. In fact, his strange marionette obsession, the circus-like songs he writes and his heavy breathing when he’s overexcited makes him creepier than Ben ever was. On the other hand, it makes his outcast status believable – no other kid in their right mind would hang out with Danny. Every time he appears on screen and starts composing love songs to Ben, it feels like someone’s switched over to the Disney Channel and one of their mawkish made-for-TV movies. Which reminds me – maybe I missed something, but how exactly does Danny know his rat’s name is Ben? It’s not as if Willard Stiles from the previous film ever broadcast the fact that he trained rats yet, strangely, Danny knows the leader of the pack is named Ben? 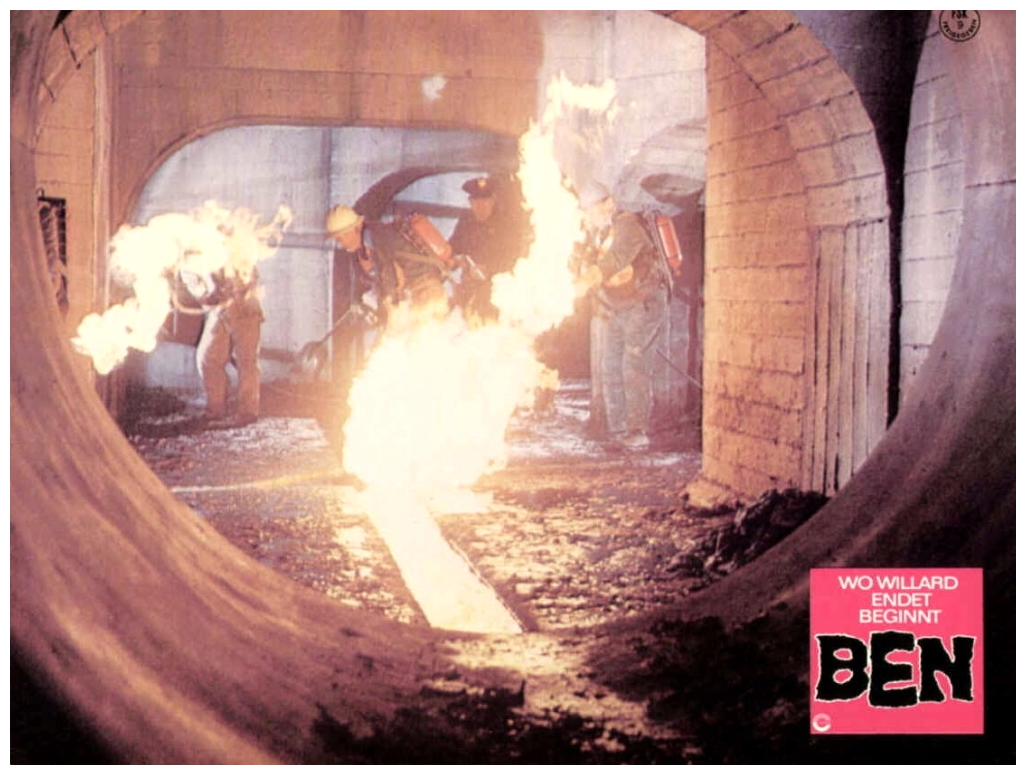 The film also has some serious pacing issues. The re-cap prologue in which we see Ben supervising Willard’s death is okay, but it’s nearly thirty dull minutes before Ben and Danny become friends. I know what you’re thinking: If only the producers dispensed with ‘A Boy And His Rat’ premise and concentrated on ‘Rats On Rampage’. The scenes in which the rats attack, kill and destroy are pretty funny, nothing scary here. Rats in a fitness centre? Rats in a supermarket? A six-foot tall sewer worker taken down by half-a-dozen rats? Priceless. Not to mention a rat that can not only read but also understand the word ‘pesticide’ written on a cheery yellow box. There’s also rats unscrewing air-vents and riding on toy trains, but it’s not all shits-and-giggles. The so-called climax of the film seems to go on forever, watching the same scenes of flamethrowers and running rats over and over again for about twenty minutes. 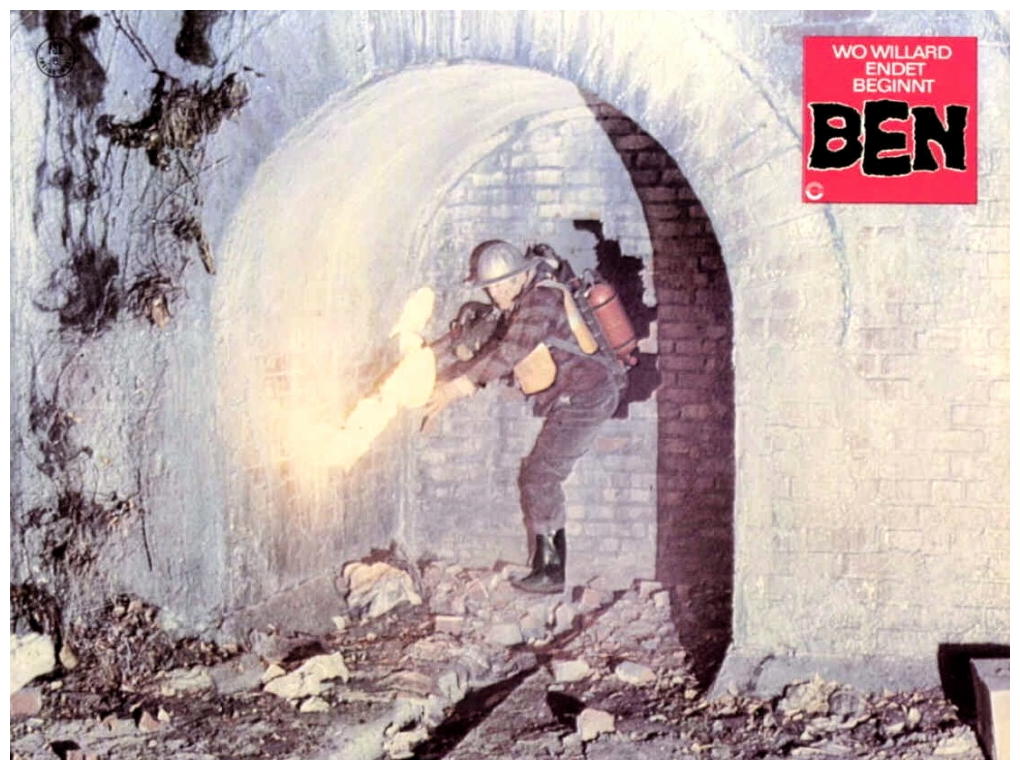 It really doesn’t have much else going for it except the aforementioned Oscar-nominated song sung by Michael Jackson over the end credits. I’ll leave you with an observation from critic and old friend Roger Ebert: “This isn’t a thriller but a geek movie. In a thriller, we’re supposed to be scared by some awesome menace to mankind – the Green Blob maybe, or Big Foot, or the Invincible Squid and his implacable enemy, red wine sauce. But in a geek movie, the whole idea is to be disgusted because the actors have rats all over them.” I’ll now take this opportunity to invite you to join me again next week when I throw you another bone of contention and harrow you to the marrow with another blood-curdling excursion through the darkest dank streets of Hollywoodland for…Horror News! Toodles! 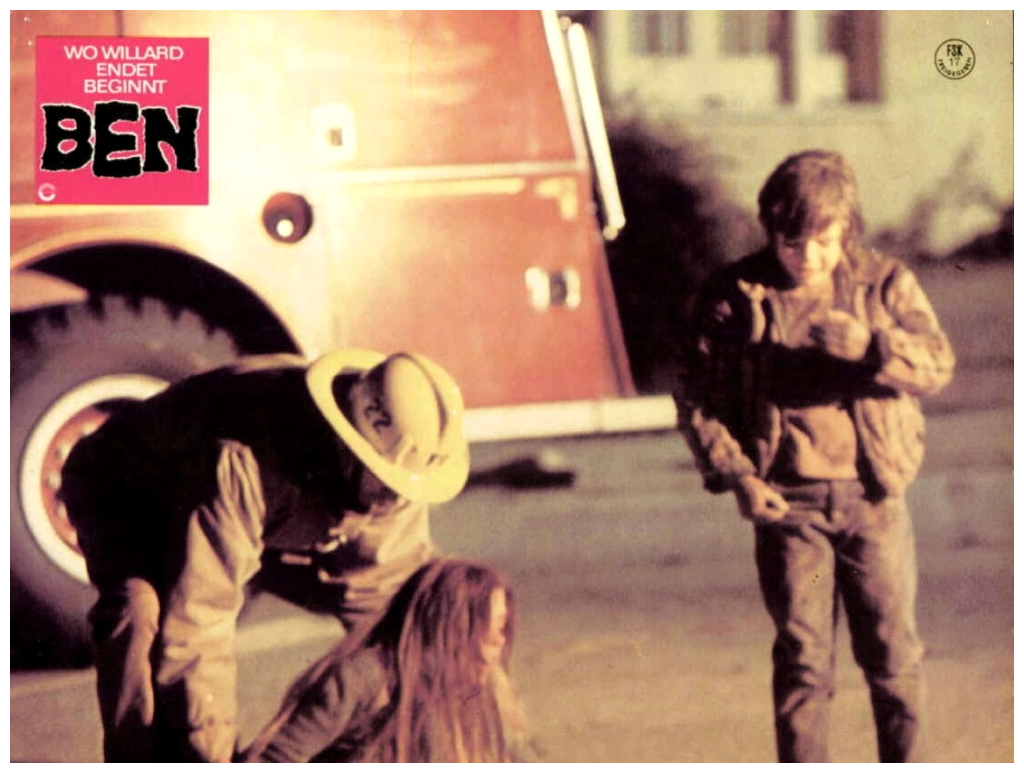 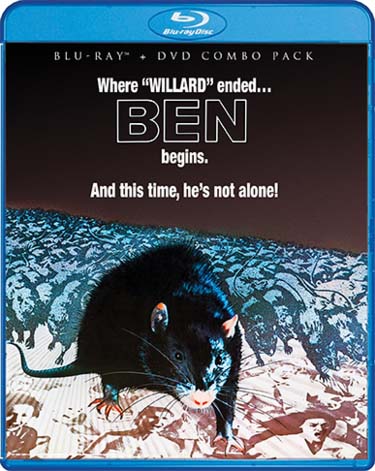 Ben (1972) is now available on bluray from Shout Factory