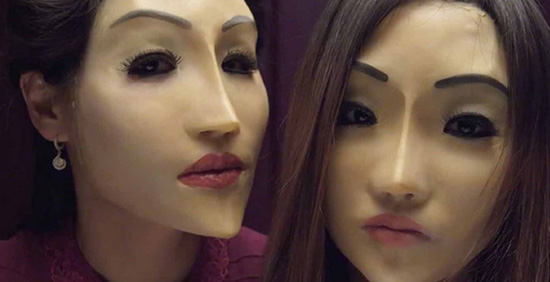 Feeling alone in a world where everyone looks exactly the same, a young girl decides to take extreme measures to change her appearance.

More short films, kiddies! Today we have HUMAN FORM, a body horror from South Korea, written and directed by Doyeon Noh. The film is in Korean with English subtitles.

Our story focuses on a school girl named In-Hyung (Si Yeon Kim). She lives in a world where everyone looks exactly the same. And I mean EXACTLY. Apparently plastic surgery is a rite of passage. Every woman has the same face, every man has the same face. The goal of every citizen seems to be to save up enough money to become just like everyone else.

The girl is in a hurry to change her face and join society. Her family, however, won’t pay for it. They said she has to pay for it with her own money if she isn’t willing to wait. So she tries everything she can think of to make it happen, ultimately leading her to sign up for “research surgery”. oh yea…that can only end well, right?

Now, I can’t help but think there is some sort of social or maybe even political commentary being made here. It’s hard enough to be a teenager in a world where one is judged on every last detail of their lives and appearance. Imagine that same world but with the ultimate goal of erasing your individuality, at least physically. Creepy, amirite?

The prosthetic masks the actors are wearing are absolutely incredible. There is a credit for digital effects, so I’m not entirely certain if they are in fact masks or some sort of CGI effect. But if they are masks, they are perfectly seamless. I was trying really hard to look for flaws. In some cases, I was pretty certain that the faces were prosthetics but in others….

Most of this cast are newcomers to film, that is to say this is the only film listed for them as a professional credit. That being said, all the actors turned in really strong performances. Considering if they are wearing masks/prosthetics, it’s a real challenge to emote through such a thing. There are no weak performances in this film.

I am a casual fan of Korean horror films, although to be honest this one is different from others I have seen. It hits some sort of note that makes it both beautiful and frightening at the same time.

So using my special short scale of one to five, five being awesome, I’m giving this film 4 scalpels.