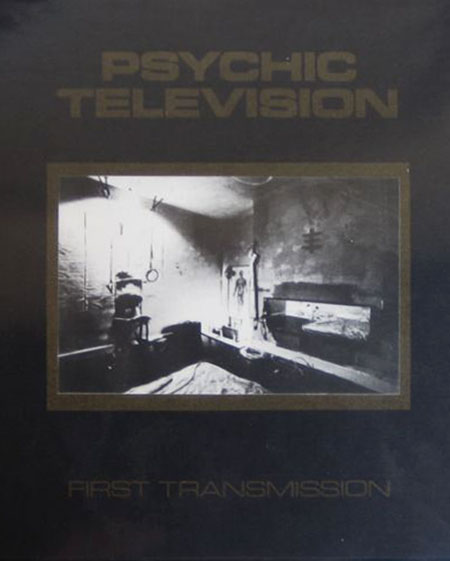 For over 30 years, the so-called First Transmission video from Psychic TV, has been the stuff of, well, “snuff film” legend. First advertised in the back pages of Thee Grey Book , The First Transmission was an ultra weird touchstone of the underground VHS tape trading scene of the 1980s.

It’s kind of difficult to talk about First Transmission, at least in a critical kind of way. This is a hard to find, four hour shockumentary-style, mondo-type film, a collection of segments that range from extremely disturbing to extremely uneventful. There is no plot, no story being told, no theme throughout the 240 or so minutes other than “disturbing.” The film was put together by Psychic TV, or the Temple Ov Psychick Youth, a cult/music group/collective including folks like Genesis P-Orridge, Monte Cazazza, Brion Gysin, and others. A lot of it makes no sense, and a lot of it is real, or at least convincingly real, so it’s probably best to start at the beginning and work our way through. 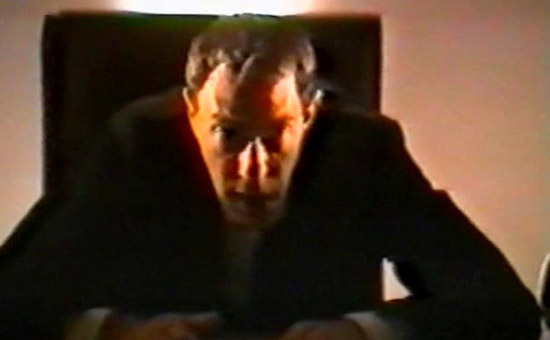 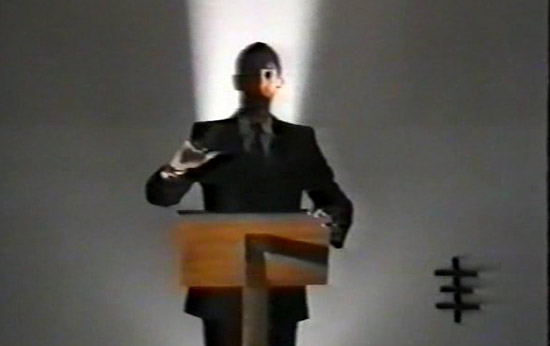 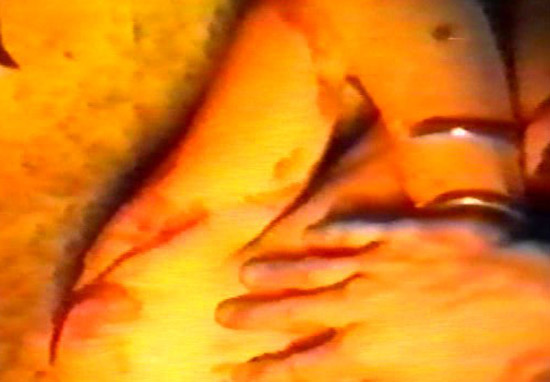 First Transmission opens with a “A Spokesman for the Temple Ov Psychick Youth,” where a guy stands at a podium and talks about perceptions, theories, “the obvious,” and other pseudo-philosophical topics. It quickly cuts to “Ritual Ov Psychick Youth,” which is a whole other situation. Here we have a guy being messed with, tortured, cut up, and bled. He’s sprayed with something (paint?), hanging by his hands with a bag over his head. Symbols are painted on the ground, there are people indulging in sex acts around the room, people chanting, music playing. Eventually he is laid down and cut with a knife, small cuts here and there, his blood used as finger-paints by various onlookers. A knife is dragged along his body, he is spit on, pissed on, has tubes inserted into his orifices. What does it all mean? No idea.

After an intermission that involves a picture of the biblical Mary with synth music playing over it, we come to the more disturbing section of the video. A disclaimer says that the following video was recorded in California and the police claim to have no knowledge of the events depicted. Cut to video of people on the street, taken from a moving car, before ending up in a motel room, a guy playing with himself in front of a mirror. The guy/kid and his friends skateboard around town before heading back to the motel. There, a doctor injects them with something, then connects some kind of electrode or something to them, causing various issues. This goes on for a bit, all building up to the doctor cutting off a guy’s penis. This all appears to be very real, a grainy video-look without obvious cuts or edits. It’s messed up, to say the least, as we see the surgery patient pee from a small nub into a bucket. 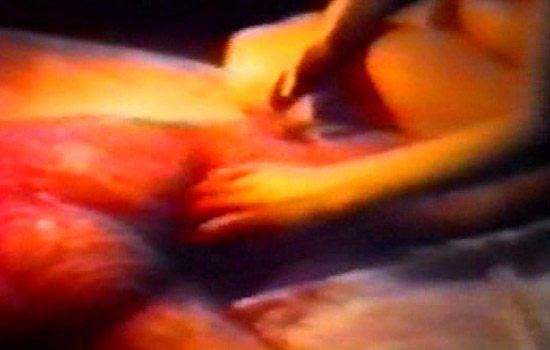 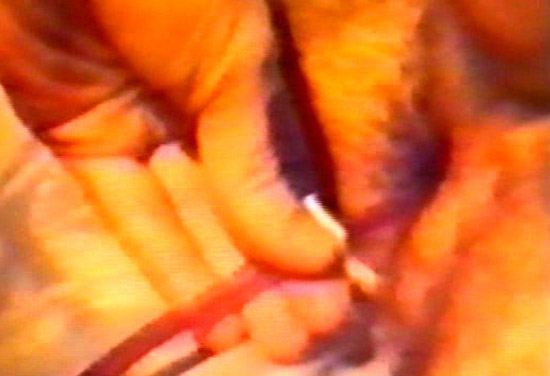 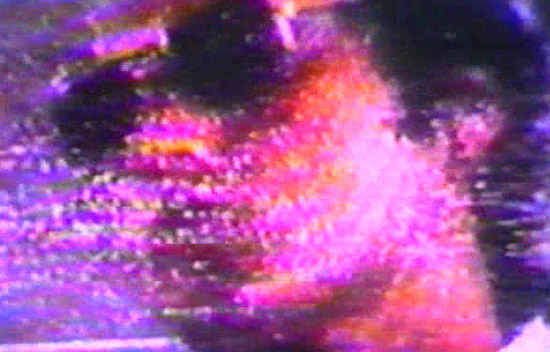 From here, we’ve got about 30 minutes of Jim Jones/Jonestown footage, interview clips and audio over photos of the massacre (entitled “Thank You Dad”), followed by a woman getting dressed. There’s more talk from the intro guy, explaining how important it is for all of us to misinterpret ourselves to others so that we can protect our individuality. “SXXX-80” shows a woman spit out gum, then someone blowing bubbles underneath the creepy mask they’re wearing, before the woman trims her pubic hair on the toilet and puts a worm (?) on her crotch.

The final hour features interviews with Genesis P-Orridge and Peter Christopherson discussing the importance of Psychic TV and explaining the philosophy of their group. “Psychoporn” is a bunch of blobs of light and color with music over them that eventually meld into blurry, colorful sex scenes. Finally, “Those Who Do Not Remember the Past Are Condemned to Repeat It” takes everything we’ve seen the past three and a half hours and edits it all into a collage of sounds and visuals. 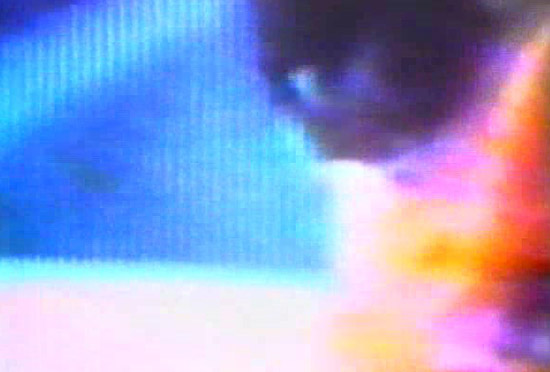 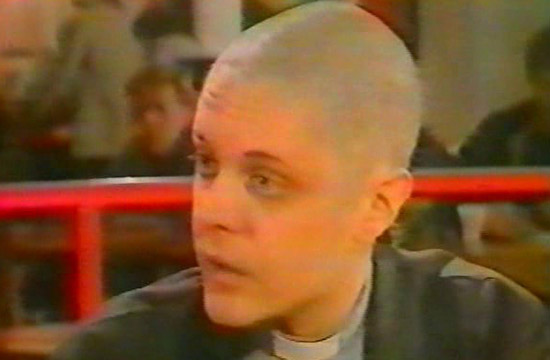 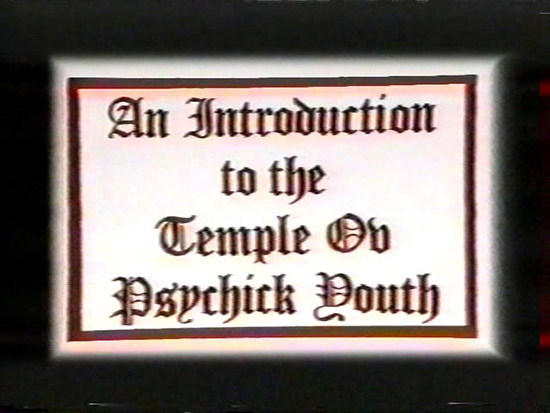 First Transmission is a big deal to folks that are into Psychic TV and the various individuals associated with the group. However, it’s tough to find reasons that will convince anyone else to give it a look. It’s a collection of experimental-type short films, and some individual pieces are interesting on their own. But all of it together becomes tedious, almost pointless, as we, the uninitiated, search for a point to it all. Sure, there are disturbing scenes – if the scene where the guy’s penis is cut off is real, that is beyond upsetting – but the entire four hour fiasco seems pretentious and pointless. There is a small audience who will enjoy this, but for the average horror/exploitation/extreme cinema fan, I’d recommend saving your time and revisiting one of the 70s/80s “mondo” films.