“Based on the classic science fiction novel by H.G. Wells, scientist and inventor Alexander Hartdegen is determined to prove that time travel is possible. His determination is turned to desperation by a personal tragedy that now drives him to want to change the past. Testing his theories with a time machine of his own invention, Hartdegen is hurtled 800,000 years into the future, where he discovers that mankind has divided into the hunter and the hunted.” (courtesy IMDB)

While the remakes keep blasting their way out of Hollywood with shocking regularity, it’s fair to say this re-imagining of H.G. Wells‘ The Time Machine (charmingly adapted by George Pal in 1960) may well be amongst the best remakes of the last decade, yet even in its best moments, this Time Machine (2002) feels as undernourished as Guy Pearce‘s emaciated appearance.

At the turn of the twentieth century, brilliant professor Alexander Hartdegen (which hat did they pull that name out of? Unnamed in the novel, he was simply called George in the 1960 film) is nervously summoning up the courage to ask his girlfriend to marry him. His plans are shattered when his soon-to-be fiance is accidentally gunned down in the frosty New York streets. Locking himself away from friends and family, the obsessed Hartdegen eventually unveils an ingenious solution to prevent her demise from ever occurring – a gleaming time machine that will return him to that fateful night.

Although the machine itself works a treat, Hartdegen discovers there’s little he can do to prevent her death from being endlessly reprised. Some things, it seems, are just not meant to be (while this gives our protagonist the motivation to create the time machine, I can hear my old friend H.G. Wells spinning in his grave at the idea of an unswerving fate). Depressed, Hartdegen heads for the far future but not before visiting a library in the year 2024 where he makes the film’s most shocking discovery – Andrew Lloyd Webber has written a stage musical of The Time Machine!

Pressing ever onward, he witnesses the spectacular destruction of the moon but the subsequent effects on Earth are so calamitous, Hartdegen is forced to accelerate his machine forward thousands of years. Finally, in the year 80270 things look substantially brighter when he finds himself among a gentle race of people called Eloi. Living in fluted enclosures built into a cliff face that overlooks a magnificent gorge, he meets the attractive Maya (Weena in the original) who even speaks English. What a lucky break! But before you can say ‘Idyllic Paradise’, Hartdegen discovers the Eloi are under constant threat of being eaten by Cannibalistic Underground Nocturnal Trogs otherwise known as Morlocks.

Worse still, the Eloi are under the mind control from Uber-Morlock Jeremy Irons who, with his long white hair and albino eyes, appears to have been styled after blues legend Johnny Winter. Creepy. Those who recall Jeremy from Brideshead Revisited (1981), Damage (1992) and Dead Ringers (1988) might be wondering what the hell’s happened to his career, especially if you were unlucky enough to catch Dungeons And Dragons (2000). But, compared to Charles Dance in Space Truckers (1996) and Ali G (2002), Jeremy’s doing okay.

During the film’s brief theatrical run much ballyhoo was made about the fact that this version was directed by H.G. Wells great-grandson Simon Wells, a Disney animator promoted to first-time director. But sadly, this is far from the loving tribute that one might have expected. It also proved an arduous and mostly unhappy experience for most concerned. A bout of food poisoning took out most of the crew and an exhausted Wells even handed over control to Pirates Of The Caribbean (2003) director Gore Verbinski – briefly. 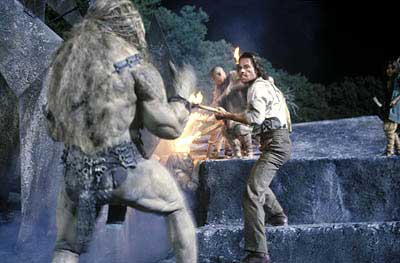 The running time – a suspiciously short ninety minutes – suggests much was cut from the film, yet on the DVD there is only one deleted scene, where Hartdegen takes his students through the snow-covered college grounds, demonstrating some of his wacky theories, and is chided by the Dean for his outlandish notions. Presumably young teens rated it low on their test cards during previews. Whatever the reason, the producers seem to have lost faith in the tale being told and consequently, scenes never feel quite finished and it feels like the film can’t wait to wrap itself up fast enough. A genuine shame. For once, here’s a film that could have benefited from some more time spent with the characters, if only to lend some emotional weight to the film’s finale, which strains for a poignancy it can’t seriously hope to deliver.

Oh well, there’s always the special effects, yes? Mostly impressive, particularly the time travel sequences depicting the changing seasons and showing landscapes and skylines rise and fall. Stan Winston‘s Morlocks however, while certainly scary and ugly in design, are way too mask-like. But the time machine itself is a different story. Built of gleaming brass with whirling lighthouse-style glass blades, it’s quite magnificent and, dare I say, improves on George Pal’s quaint but antiquated original. Overall however, little else does in this rather mediocre retread. And it’s with that thought in mind I ask you to please join me again next week when I fish-out more celluloid slop from the wheelie-bin behind Fox Studios, and force-feed it to you without a spoon, all in the name of art for…Horror News! Toodles!