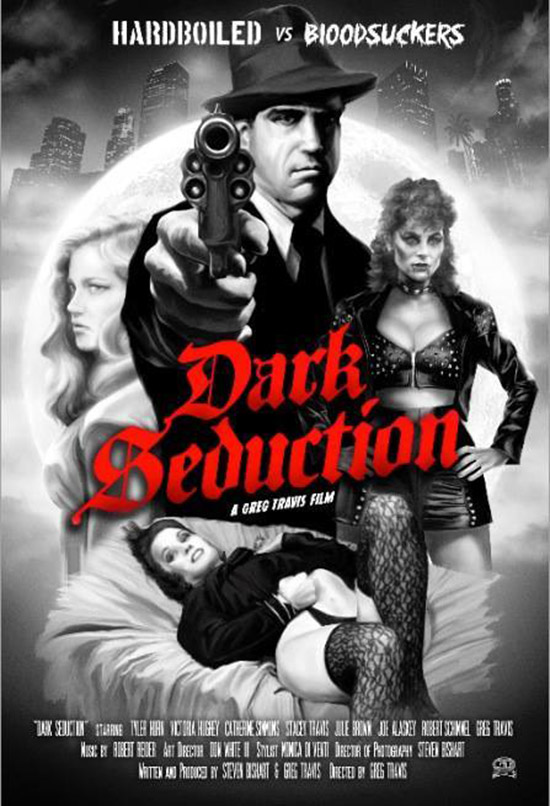 A hard-boiled love triangle between a private eye and two bloodsucking dames.

Dark Seduction director Greg Travis has been an actor since the age of twelve, before directing four films, and he also has a part in this movie. This film is shot in black and white, but it’s not a beautiful , artsy black and white. It’s dark and grainy.

Vera (Vickie Hicks) and Serina (Catharine Simmons) are two vampires who dress in punk clothes from the 80’s. It’s a bit difficult to determine what time period this film takes place in, because of how the characters dress and act. The film is labeled as comedy, fantasy, horror, and it’s definitely comical. It begins with Vera and Serina killing a guy, and of course draining his blood. They happen to leave a tooth behind.  Private Eye Dic Jones (Tyler Horn) is a broke,  alcoholic who needs a job badly. He ends up being assigned to the case of the man that the vampire chicks killed. In the process of investigating the case, he hooks up with one of the vampires, Vera, and ends up getting bitten.

Aside from the case Dic is working on, it’s nearly impossible to figure out what the actual plot of this movie is. There are so many random, overly bizarre characters that Dic encounters. Vera and Serina spend most of the film moping around saying they are hungry.  There is also a very weak love story between Dic and Laura (Stacey Travis).  A lot of the movie looks like it takes place in the 1940’s because of how Dic and his friends dress and the cars they drive.

Dic finds the tooth the vampires left behind at the murder scene and figures out it is a vampire tooth.  He spends a lot of time thinking about having a drink or doing shots. The vampires Vera and Serina spend a lot of time dancing around a pool and swimming, while looking for victims to seduce and drink their blood.

Serina decides she wants to die because she can’t make a relationship work, so she goes to see the Moon Goddess (Yana Nirvana), who basically tells her to travel the world and have lots of sex.  Did I already mention that this movie makes no sense? The beginning had a few parts that were actually funny, but towards the end it’s just a very depressing, hallucinogenic mess.  Vera and Serina fight over who gets to bite their friend. Meanwhile, Dic  has become obsessed with vampires and begins turning into one himself.

Dic is looking for Vera and Serina and finds out they are at the Pussywillow Club. The club looks like the 80’s punk scene.  Dic goes to the Pussywillow Club, but there are punk ninjas blocking the door. Yes, punk ninjas. Now this is just getting to be beyond ridiculous.  Dic beats up the punk ninjas and finds that Vera and Serina have bitten everyone in the club and the floor is covered in bodies.  He’s obsessed with the vampires, so he chases them, but ends up getting the crap beaten out of him by Serina, who is mad that Dic wants Vera.  I also have to say that the vampire teeth look absolutely ridiculous.

Dic finally finds Vera and it seems like they will live happily, weirdly together forever. Suddenly Dic is in the hospital and being told he lost a lot blood, but he will be okay. What the heck is going on? Dic says he woke up in the morgue with a bad taste in his mouth.  Laura is by his side in the hospital.

I wish I could say something good about this movie, but I spent the entire 1 hour and 21 minutes trying to figure out what the point of the film was. There was even James Bond type music at the end  of the movie.  I’m guessing the filmmakers were going for a film noir, but they failed miserably. This film actually made my brain hurt and I don’t say that about a lot of films. The funny moments were the only thing that I can say were slightly entertaining.